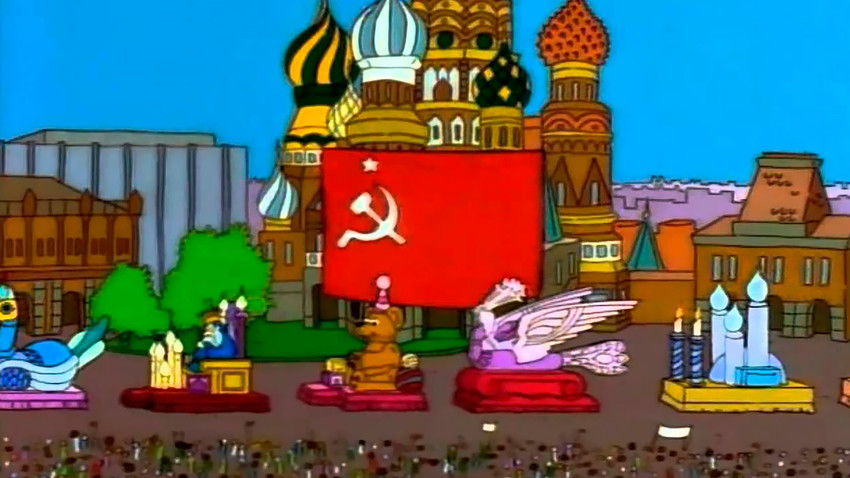 5 main symbols of the Soviets EXPLAINED

These signs, things and words are internationally recognized as symbolizing the Soviet state and socialist ideology.

‘The Bolshevik’ by Boris Kustodiev, 1920

According to the Bolsheviks, the red color of the Communist banner symbolized the blood of the people fighting for freedom. This explanation dates back to revolutionary France at the end of the 18th century, when the red banner first appeared as a symbol of revolt against the monarchy.

The red banner was used by socialists and anarchists of various types, but after 1917 it became the symbol of Soviet Russia and subsequently became the official flag of the USSR.

The five-pointed star, a sign of protection and security, has been known for more than 3,000 years. It has been used by people of different cultures – from ancient Greece and Persia to Japan and native America.

The symbol was used in the Russian Empire – on the suspenders of some ranks of the military. In 1917, by order of Alexander Guchkov, Minister of Defense and Navy of the Provisional Government, a five-pointed star was added to the cockades of the caps of Russian soldiers. When the Bolsheviks captured the Winter Palace in St. Petersburg on October 25, 1917, they were aided by several thousand sailors with five-pointed stars adorning their uniforms. According to Victor Kibalchich, Soviet revolutionary and writer, the five-pointed star later became one of the main symbols of Soviet Russia.

In Soviet ideology, the star turned red, brandishing the main color of the Revolution. Its five rays symbolize the union of the five continents of the world in the struggle for freedom. The red five-pointed star was also a sign of Mars, the ancient Roman god of war – thus, the star symbolized the protection of the peaceful labor of workers and peasants. In 1918, it became the main symbol of the Red Army.

The main emblem of the Soviet Union, the hammer and sickle, was a symbol created by the early Bolsheviks. It represented the union of the working class and the peasantry and is said to have been introduced by the artist EugÃ¨ne Kamzolkin (1885-1957) in 1918.

Over time, the hammer and sickle made their way onto the official USSR emblem and the Soviet flag.

‘The workers of the world unite!’ A Soviet poster.

The motto was originally created in German – “Proletarier aller LÃ¤nder, vereinigt Euch!” – and translates as “Workers of all countries, unite!” The phrase was coined by Karl Marx and Friedrich Engels in their “Manifesto of the Communist Party”, first published in London in 1848.

The original meaning of the word “proletariat” was derived from the ancient Roman “proletarian” – one who produces offspring. The word was used to refer to the poor citizens of Rome (as opposed to the aristocracy) who had no other property than their offspring (proles in Latin). So for the Roman state, these people were only good for one thing: to give birth to the future citizens of Rome. In contemporary terms, they were poor. This is why the word “proletariat” was used by Marx and Engels to refer to the poorest and most oppressed class – the workers.

The emblem of the USSR.

Since the 19th century, the motto has been popularized by socialists of all kinds. The inscription “Workers of all countries, unite!” was present on the coat of arms of the USSR in the languages â€‹â€‹of all the republics of the Union, and on the coat of arms of the republics – in the languages â€‹â€‹of these republics and in Russian. The motto was printed in capital letters on banknotes, the title page of every Communist Party political document, and many other places.

The text of “L’Internationale” was written by the French poet and revolutionary EugÃ¨ne Edine Pottier (1816-1887) during the time of the Paris Commune, the French revolutionary government that existed for 72 days. The text was initially sung to the tune of â€œLa Marseillaiseâ€, but since 1888, original music has been used, composed by Pierre De Geyter, worker and composer.

The Internationale has been translated into several languages â€‹â€‹and has become a universal calling card for socialists and communists, much like its predecessor, La Marseillaise. Vladimir Lenin said: “No matter what country a conscious worker finds himself in, no matter where fate throws him, no matter how foreign he feels, without language, without knowledge, far from his homeland, he can find comrades and friends by the familiar melody of the “International”. In 1918-1944, The Internationale was the state anthem of the USSR, until the new state anthem was adopted.

If you use all or part of the content from Russia Beyond, always provide an active hyperlink to the original content.