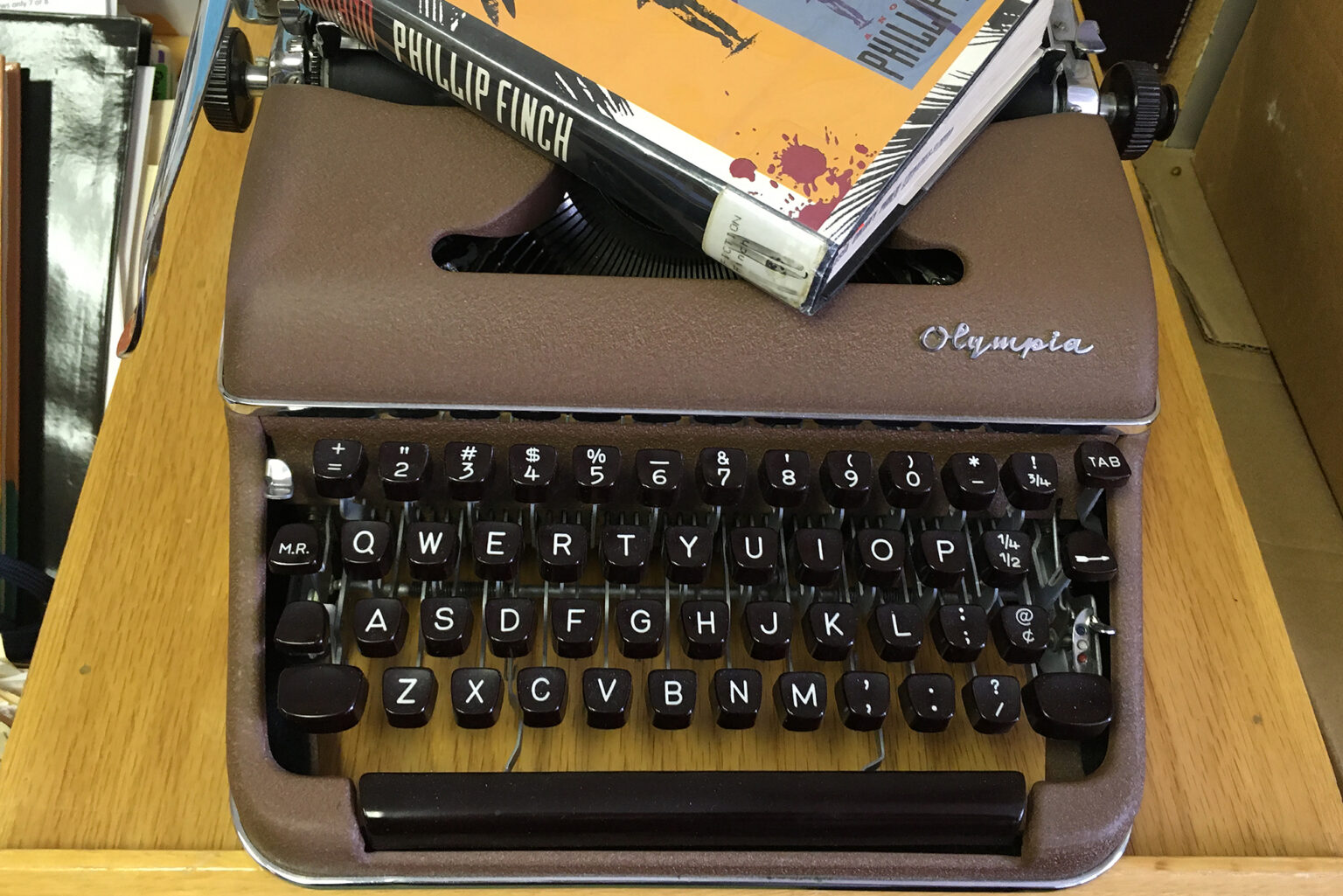 A Christmas letter to the unknown land

You’ve been away for quite a while so here’s a Christmas letter to keep you up to date with any news you missed. So much has changed. Time flies like a shadow over the living, rendering us all Henry Adams to the eclipse of history. There are a lot of things I want to share, because you could have helped make sense of it.

I am typing this message on your old portable typewriter, the trusty Olympia, out of nostalgia or perhaps magical thought. Rat-a-tat ding, as in the old days, when all good journalists came to the aid of their country.

When you left, Barack Obama was nearing the end of his first presidential term. Indeed, the â€œarc of historyâ€ seemed to bend inexorably towards social justice. While there was still a long way to go, most of the nation felt we were headed in the right direction. Oh, how naÃ¯ve we were.

Obama won a second term, but with a narrower margin than his first. Fun, but as much as I didn’t like GOP candidate Mitt Romney at the time – filing cabinets full of women! – I now admire his consistent and thoughtful style of conservatism.

John McCain, the 2008 GOP nominee, misses me even more. McCain died in 2018 of brain cancer, and part of the country appeared to be dying with him. Gone is the integrity he brought to Republican politics, the will to correct the lies about his opponent, the sense of pride in civic duty and sacrifice, the conviction that democracy is about the peaceful transition of power, that your candidate wins or not.

After Obama won his second term, there was a change in the country. Things have gone further right at an alarming rate. In mid-term of 2014, fueled by a base that increasingly viewed people of a different skin color or faith as the enemy, Republicans held the House and took the Senate.

The arc of the story seemed to falter.

Many of us thought Donald Trump’s candidacy was a joke, but the joke was on us. A gang appeared at the end of the campaign that caught him bragging about grabbing women by their private parts, and he won anyway (insert McCain and Romney’s desire again).

Trump, a documented womanizer and liar and commercial fraudster, had some broad support among evangelical Christians. Trump lost the popular vote but won the Electoral College (ouch, we really need to fix this), beating Hillary Clinton. Pollsters and pundits, who were almost unanimous in their sufficient predictions of Clinton’s victory, had failed to assess the popular backlash against the first black president and the first female candidate to have a real shot at the job.

The arc of history has blunted.

This shift in the American psyche, this hard turn to the right, has been reflected in an acceleration of authoritarianism around the world. I have yet to read an adequate explanation of this phenomenon, but I fear that the desire for a dictator is ingrained in us, a sort of death wish of the political soul.

Trump was more than ready to satisfy that urge, from military crackdowns on peaceful protests to calling out journalists as the enemy of the people. The response from extremists has been enthusiastic, and in 2017 neo-Nazis marched with swastikas and Confederate flags in Charlottesville, Va., At a torchlight rally chanting, “The Jews will not replace us.” .

As deeply divided as we were, things were about to take a turn for the worse.

In March 2020, the nation was crippled by COVID-19, a virus that likely passed from animals to humans at a meat market in Wuhan, China. OK, I know this sounds like the plot of a Michael Crichton novel, but stick with me.

The pandemic has caused lockdowns around the world as scientists rushed to find a vaccine. Here at home, we have been taken back to measures that worked during the 1918 influenza pandemic, including wearing masks and compulsive hand washing.

It has been a terrible year, with schools and businesses closing and many professional lives being conducted online. Things were made worse by Trump’s incompetence, his insistence that the virus would magically disappear, his bragging about ineffective treatments, and his efforts to minimize reporting of the virus’s death toll. His pandemic leadership was based on lies. He caught the virus himself, of course, but survived with medical treatment unavailable to most Americans.

A few days ago, we passed 800,000 coronavirus deaths in the United States, the highest number of any nation in the world. We are still in the midst of the pandemic, with an estimated 1,200 Americans dying from the virus every day. This, despite safe and effective vaccines available since the spring.

Scientists have done their job, the medical equivalent of a moon shot, and although the vaccines are safe and effective, a stubborn fraction of Americans are refusing the shots. The political divide extends to public health, and many Trump supporters believe the vaccines are a hoax, or a government conspiracy to change our DNA, or some other conspiracy theory that would be denied by Crichton as implausible.

This rejection of medical science and civic duty prolonged our suffering. This denial of science has been encouraged by Republican lawmakers who have been busy blocking common sense measures like mask and vaccine warrants in the name of personal and religious freedom. I have neither the time nor the energy to tell you all about the madness of public health measures, nor to describe the anger and bewilderment of rational individuals.

Kim and I are vaccinated, Phil, so don’t worry about us. We have been careful during the pandemic, both for ourselves and for others, but I have to say that the prospect of starting yet another third year of the pandemic has worn us out. I can’t remember a time that was more difficult. Others feel it too, and you can see the confusion and depression in other people’s eyes.

Death now takes mainly the unvaccinated, but the pressure on hospitals and medical staff continues and ties up resources needed for other medical emergencies. I struggle with my anger because of the stupidity of it all, although most of that anger was expressed by a drink or two before dinner. It’s dangerous, and something I need to watch out for.

In May 2020, there was the murder of George Floyd, a black, by a white cop in Minneapolis. The nation has erupted in marches and demonstrations and a rage against America’s racial division. It was both similar and different to the racial unrest of the 1960s. There was even a march here in Emporia, Kan., And Kim was carrying a handwritten sign that said “Stop the Killing”.

The fuse still burns on this issue, but Republicans have pivoted and claimed victim status for themselves on “critical race theory.” They twisted the term and are now embarking on a witch hunt to eradicate CRT from our schools, claiming it causes discomfort to white parents and children. But any white discomfort resulting from the study of systemic racism in America seems small compared to a knee held on a black man’s neck until his death.

Trump was impeached (of course!) For obstructing justice and abuse of power, but was acquitted by the GOP-controlled Senate. He was impeached a second time for inciting the Jan.6 uprising on the U.S. Capitol, but was again acquitted because there was not a two-thirds majority in the Senate to convict.

Even before the November 3 election, which was decisively won by Democratic candidate Joe Biden, Trump had started to cast doubt on the integrity of the election. Trump and his henchmen kept repeating the lie that the election was stolen. When the time came for a joint session of Congress to count the electoral votes and formalize Biden’s victory, a crowd of pro-Trump supporters stormed the Capitol and briefly held the building. Lawmakers went into hiding as a Confederate flag paraded through the halls. There have been calls to hang Vice President Mike Pence because he would not block certification.

The arc of history was broken.

The electoral vote was certified hours later and Biden was sworn in on January 20, but we still end up with a democracy reeling from a failed coup attempt. There isn’t really a Republican Party anymore, it’s just a Trump party. There are no ideas, just personality cult, and their only platform is to remove minority voters, install Trump loyalists in state houses, and empower to certify elections to Trump loyalists.

That pretty much brings us up to speed, except for the fact that Trump has successfully appointed three justices to the United States Supreme Court and the court looks set to overturn Roe v. Wade. I can’t even begin to explain the dangerous fruit cakes in Q-Anon. Oh, and the guns. Remember how a felony carrying a concealed weapon was in Kansas? Well, now it’s not only legal, but even students can build up heat in the classroom.

Phil, you wouldn’t recognize the state or country you left.

You were a special friend, someone who always saw me as my best self, and an advocate for Kim and me from the first time you saw us as a couple, to the champagne you bought for our wedding. You shared our happiness, experienced our private sorrows, and been unflinchingly generous throughout it all. You were difficult at times, that way smart, true friends can be difficult, but we couldn’t have had it any other way.

Times are tough in a way I couldn’t have imagined nine years ago. The pandemic will end, yes, but the toll will take years to count. Democracy can survive, but only if we fight hard enough to make all votes count. America is a promise we must keep. How desperately I wish you were here now to offer a personal observation or insight to help us get through this.

Even now, those nine years later, I miss your shadow in our footsteps.

We’ll never have a chance to speak again, Phil, at least not on this side of the unknown land. In the meantime, I’ll keep throwing columns, getting the wrath of the drastically wrong, and trying to bolster the arc’s trajectory a bit.

This essay first appeared in the Kansas Reflector, member of the Florida Phoenix. the network of state newsrooms.