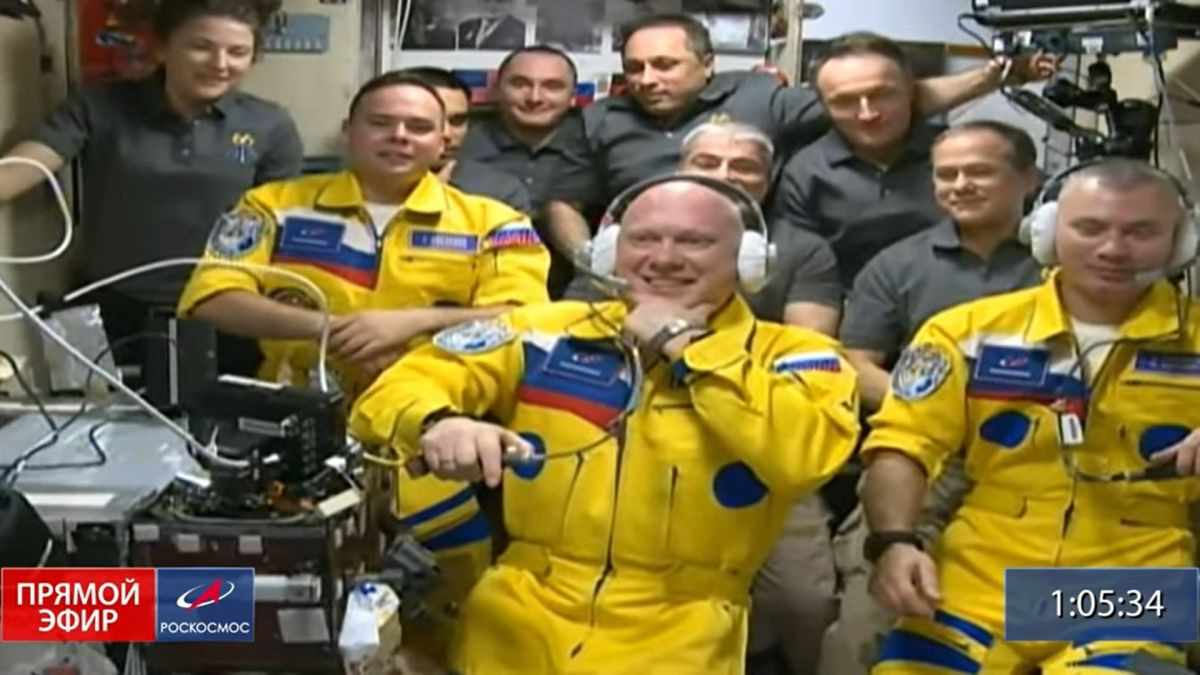 A message to Ukraine? Cosmonauts wear yellow and blue flight suits for a trip to the space station

The clothing choices of three cosmonauts who have just arrived at the international space station raise a few eyebrows.

A Russian Soyuz spacecraft carrying Oleg Artemyev, Denis Matveev and Sergey Korsakov docked to the new Prichal module of the orbital laboratory today (March 18) at 3:12 p.m. EDT (1912 GMT). About 2.5 hours later, the hatches between the two vehicles opened and the three new arrivals floated aboard the station to greet their seven teammates.

Everything went according to plan, but the hatch opening was still surprising, as it revealed that Artemyev, Matveev and Korsakov were wearing bright yellow flight suits with blue highlights – the colors of Ukraine.

It’s great to see such a warm welcome from the new crew on the ISS! #SoyuzMS21 Love their costumes!💛💙 pic.twitter.com/BB9ss1IttnMarch 18, 2022

Artemyev, the Soyuz commander, was asked about the colors during a hatch opening ceremony webcast by Russian federal space agency Roscosmos. He replied (in Russian) that there was a surplus of yellow fabric in the warehouse, according to space exploration enthusiast Katya Pavlushchenko, who posted a Twitter thread on the exchange.

However, not everyone buys this answer. Some people familiar with spaceflight procedures seem to think this could be a show of support for Ukraine, which Russia invaded on February 24.

“Three Russian cosmonauts who have just docked at the ISS arrive in Ukrainian yellow!” former NASA astronaut Scott Kelly, who served a year-long mission on the space station with cosmonaut Mikhail Kornienko from March 2015 to March 2016, tweeted todayin Russian and English.

“Wow. Just wow. Bravo. За экипаж!” tweeted Terry Virts, another former NASA astronaut. He spent six months aboard the station from November 2014 to June 2015 and traveled to and from the orbiting laboratory in a Soyuz. (“экипаж” means “crew” in Russian, according to Google Translate.)

There are also other possible explanations for flight suits. For example, several people on Twitter pointed out that the colors are close to those of Bauman Moscow State Technical Universitywhich Artemyev, Matveev and Korsakov all attended.

These are only speculations; all we have to do for now is Artemyev’s cryptic response at the hatch-opening ceremony. Hopefully one of the cosmonauts will offer more details in the not too distant future.