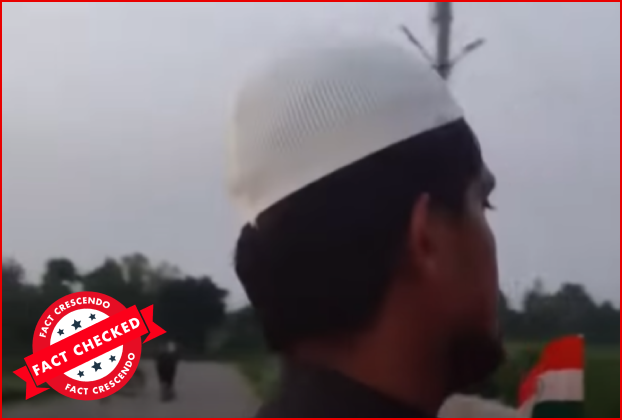 A scripted video claims to show a Muslim opposing the display of the national flag. – FactCrescendo

The video is scripted and not based on an actual incident.

The caption reads: “Make this video very viral, her man should tell us the reason why he objects to the display of the national flag on the vehicle.”

We began our investigation by carefully watching the viral video and found that at the 2:08 minute timestamp, the video shows a disclaimer. The disclaimer mentions “This video is complete fiction, all events in the video are scripted and made for awareness purposes only. It does not promote any type of activity or defame any type of ritual. Any resemblance to actual persons, living or dead, or actual events is purely coincidental. “

Also, we found the extended 3 minute version of the viral video where we can see the Muslim man giving a reason why he is against the Hindu man putting the national flag on his vehicle.

He says: “I don’t want you to put the national flag on your vehicles because the flags can fall off, or a child can take them off and throw them away and then people walk on them, which is disrespectful. This is why national flags should not be displayed on vehicles.

WHY DO YOU NEED MORE CONTEXT?

Users may wonder whether the video is staged or not. It intends to show the situation of community tension in the country.

However, Fact Crescendo debunked several of these staged and scripted videos, which went viral with community claims.

Often these fictional videos are shared to spread misinformation and create community tension.

1. A “staged” video has been shared with a false community claim that Muslim men tricked Hindu girls pretending to be Hindu boys. (Read Fact-Check)

2. A ‘scripted’ video was shared with an unsubstantiated claim that a Muslim boy was caught stealing a young girl’s bike. (Read Fact-Check)

3. A “fictional” video was shared as a real child abduction incident. In India, rumors of child abductions have already led to several deaths in popular lynchings. (Read Fact-Check)

4. A ‘fabricated’ video of the same Sanjjanaa Galrani page has gone viral as a real-life incident of a man being electrocuted while using a plugged-in cellphone to charge it. (Lily Fact check)

5. A scripted video has gone viral as a real incident of a dowry case where the groom refused to marry the bride because of less dowry. The Times of India also falsely reported this video. (Read Fact-Check)

6. A scripted video has gone viral as a real incident showing a Muslim tailor harassing a Hindu woman. (Read Fact-Check)

In the name of “social awareness” or “motivational” or “comedy” videos, these scripted videos are only designed to garner social media views and hits.

Sometimes they are shared out of context and sometimes with outright false and dangerous community claims. Therefore, users must know the complete context of these videos.

Fact Crescendo found the claim made with the viral video was Fake. The viral video is scripted and bears no relation to reality. These videos are created to drive engagement on social media.

Title:A scripted video claims to show a Muslim opposing the display of the national flag.