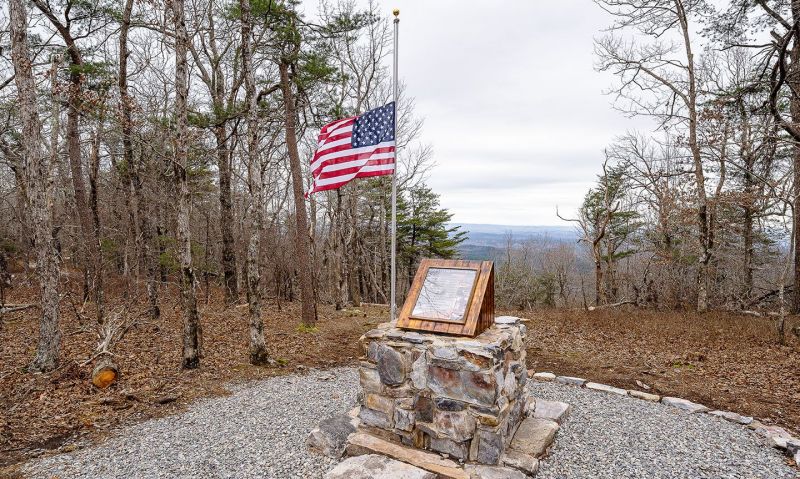 By Paul V. MaganaDecember 9, 2021No Comments

The US Flag Code states that unusable US flags must be removed in a dignified manner, preferably by burning. â€œBut there is nothing in the flag code that says what to do with the ashes. I always thought that maybe they should be buried somewhere where they will never be disturbed,â€ he said. said Dave Graham, commanding officer of Billy Glenn Rushing American Legion Post 90 in Atmore, Ala.

Thanks to Graham’s guidance, the idea of â€‹â€‹creating a final resting place for the ashes of retired American flags became a reality.

The ashes of retired American flags will now be buried in a newly constructed steel vault called the Old Glory Lookout which is placed atop the tallest mountain in Cheaha State Park in Delta, Ala. The creation of the vault was a collaboration between American Legion Post 90 and Cheaha State Park.

â€œOur goal and hope is for this place to be visited, respected and enjoyed by thousands of visitors every year,â€ Graham said.

The vault was dedicated on December 7, in celebration of Pearl Harbor’s 80th anniversary, in a public ceremony at the Old Glory Lookout with members of the Post 90, local and national dignitaries and members of the community . The first ashes buried were those of a flag removal ceremony at Post 90 to mark the 20th anniversary of September 11. Next, ceremony attendees were invited to drop off Old Glory ashes that they might have brought with them.

“The remains of these retired American flags will rest undisturbed on Alabama’s highest peak and welcome the rising sun each day,” said Chris Blankenship, commissioner of the Department of Conservation and Natural Resources at the Alabama. â€œThey serve as a reminder to honor the past and embrace the future. We are honored that Cheaha State Park has been chosen to house this important facility.

The vault is encased in native Cheaha quartzite that was hand-cut nearly 100 years ago by the Civilian Conservation Corps, and is located on the eastern slope of the ridge near Bald Rock overlooking the valley below . Alabama State Parks Director Greg Lein and Cheaha State Park staff worked together to select a worthy location in the park to serve as the final resting place for the ashes of the flags at the retirement.

â€œWe are proud of the staff of our park system for their strong history of supporting our country’s military,â€ said Lein. â€œThe staff at Cheaha did a great job helping the American Legion Post 90 create the Old Glory Lookout. “

A wooden plaque sits atop the arch with photos of the American flag removed. The plaque bears the emblem of the American Legion and reads, â€œI am the ashes of our American flag that flew on a home or business in Alabama. I can’t fly anymore! The sun, the winds and the weather made me become tattered, torn and withered. I am no longer fit for a correct display, but I have achieved my goal. Lord, please take heed to this beautiful place, respect it and love it like I do. Protect it from further development so that I am never disturbed. My NAME IS OLD GLORY! ”

Graham said the safe is for any veterans service organization, civic organization or Boy Scout troop to bury the ashes of retired American flags.

â€œOur little post had a vision that we took action on,â€ said Paul Chason, warrant officer for Post 90. â€œWe believe (Old Glory Lookout) is the first of its kind in America.â€