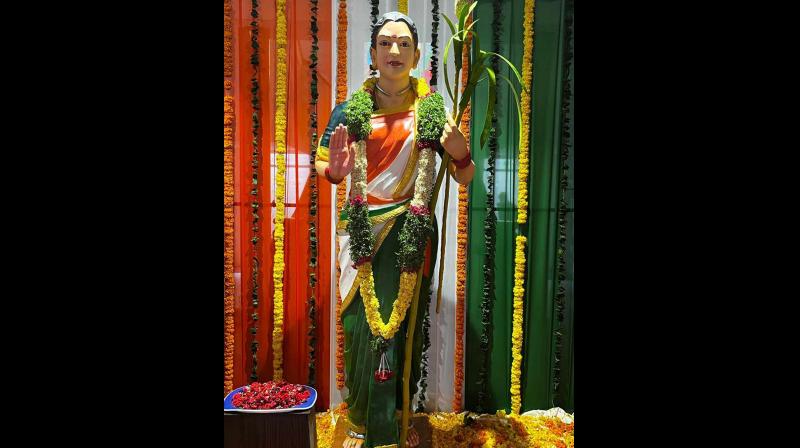 And now a Congress version of Telangana Talli

HYDERABAD: In a bid to replace the Telangana Talli image promoted by the TRS government, Congress on Saturday unveiled its own version of the Gandhi Bhavan statue.

TPCC leader A. Revanth Reddy claimed that more statues of the Congress vision of Telangana Talli would be installed in the 119 Assembly constituencies of the state. He urged party men and the general public to come forward to place their orders with the artists and ensure the statue is installed in every village.

Revanth Reddy reiterated that the statue proposed by Congress looked more like a mother to everyone, unlike the statue of a woman from a wealthy background, giving the impression of a ruling class person, that the state government uses as Telagana Talli.

Reflecting the features of a rural laborer in the farming community, Gandhi Bhavan’s sculpture is draped in a tricolor sari reflecting the colors of the national flag. Standing about eight feet tall, the statue wears jewelry traditionally worn by rural people, including nanu for the neck, armbands and kadiyam on the legs. She is seen holding saplings of sugar cane and corn in one hand and giving blessings with the other.

The Congress believes that the Telangana Talli should reflect revolutionary women who fought against injustice and took up arms against tyrants.