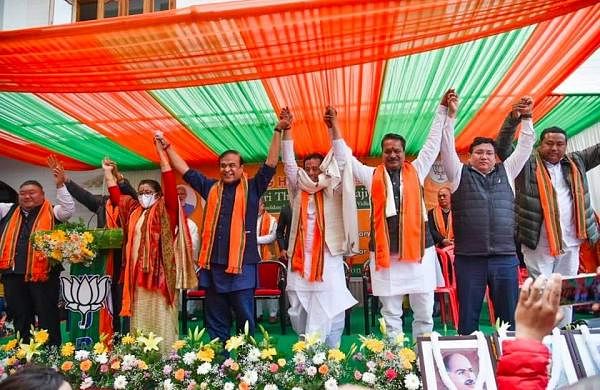 Speaking at Manipur Chief Minister Thongam Biswajit’s ‘flag hoisting’ ceremony, Sarma said the people of Manipur had suffered a lot before 2017 due to bandhs and blockades.

“We had doubts about our ability to solve the problem. But Prime Minister Modiji was confident. He said it was possible. Soon it became a reality. Bandhs and blockades are now a thing of the past,” Sarma said. He said the previous Congress government could have fixed the problem, but it did not.

“Modiji has built a trunk road that connects Manipur to Silchar in Assam. Now the state has two highways to move goods into the state. Biswajit was the PWD minister. Under him many roads and bridges were built,” the CM of Assam said.

He said that before the 2017 elections in Manipur, the BJP could not imagine that it could form the state government, but Biswajit could visualize it. “He came from the TMC to the BJP and contributed immensely to the massive growth of the party in Manipur. We all know that and we have to recognize that,” Sarma said.

He added: “When he joined the BJP in 2016, I wondered why he was taking such a huge risk. He said BJP came to Assam. We will work hard together to bring the BJP to power in Manipur. We have all become Biswajit fans today.

Nagaland Deputy Chief Minister Y Patton, Nagaland Minister and BJP leader Temjen Imna Along Longkumer were among a host of BJP leaders who attended the program.