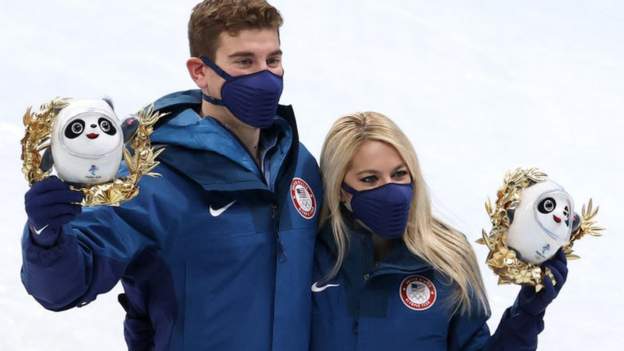 They know they’ve won an Olympic medal, they just don’t have it to show anyone.

And American pair skaters Alexa Knierim and Brandon Frazier still have no idea when they’ll get it, just that every time they do, nothing can ever replace the moment they lost.

The International Olympic Committee (IOC) has decided not to award medals for the team figure skating competition at Beijing 2022, pending the resolution of a doping investigation into Russia’s Kamila Valieva.

“We were bringing home a medal for our country, which felt so much bigger and bigger [than any other]and coming home right after the Olympics and showing and telling about this beautiful medal to the people back home who saw something they never thought possible – those are the moments I wish I could have.” Knierim, 31, told BBC Sport.

“The sad thing is that nothing can replicate or recreate the moment in Beijing.

“Even if we were to return to the exact place [to receive the medals]timing is everything and that moment has passed.”

They don’t even know what color the medal will be when they get it.

The World Anti-Doping Agency (WADA) is seeking a four-year suspension for 16-year-old Valieva and her disqualification from competitions since the trimetazidine test failed for angina, which would include the Olympics in winter.

Earlier this week, the Court of Arbitration for Sport registered WADA’s appeal against the Russian Anti-Doping Agency (Rusada) and Valieva, with WADA concerned about the delay in resolving the case after Rusada said she was not going to make the results of her investigation public.

Valieva helped the Russian Olympic Committee (ROC) win the figure skating team competition in Beijing, with the United States second and Japan third. If the teenager is disqualified, the United States could be promoted to gold and Canada, fourth, could be elevated to bronze.

Knierim and Frazier, 29, were on the top step of the podium last weekend at the Sheffield Grand Prix, a gold medal hung proudly around their necks during a victory ceremony with anthem, raising of flag and cheers. And there were similar scenes in France when they became world champions in March.

But these are not Olympic medals.

“For a lot of elite athletes, sometimes the trophy or the medal, when you get it, goes in a drawer,” Knierim said.

“It’s not going to go in a drawer! When we get our medals, I’ll be sure to display mine at home and be very proud of it, whatever color it is.”

Frazier agreed that he would take care of his own, saying, “I’ll probably wear it for a good year!”

The IOC has promised a ‘worthy’ medal ceremony when the time comes – lawyers have suggested it could still take more than a year – but the athletes themselves would have preferred to have their moment in Beijing and deal with the fallout of any eventual stripping of the medals later.

Frazier is clear that this unprecedented situation must never happen again.

“If the committees making these decisions care about preventing this from happening again, they need to listen to the athletes involved so they can understand firsthand what we are going through and what it is like to have times like this. here, then they understand the seriousness of the situation,” he said.

The US team filed an unsuccessful legal action while in Beijing to demand their medals be awarded before leaving the Games.

News of Valieva’s failed test came after she competed in the team event, but before the medal ceremony took place. The outcome of a legal challenge also allowed her to continue competing in Beijing, finishing fourth in the women’s event she had led before an error-strewn performance in her second routine.

The sample had been taken in December but the results weren’t revealed until around six weeks later on the biggest winter sports stage.

It came at a time when Russia was officially banned from the Games under state-sponsored doping sanctions. Athletes from the country who were able to prove they were clean were allowed to compete under the ROC without a flag or anthem.

Knierim and Frazier may or may not be Olympic champions, but it’s not even the color of the medal that matters.

“Color only matters when it comes to whether the competition was fair or not. It’s not up to us, it’s what surveys do,” Frazier said.

“It’s more because we just wanted that medal and that experience at the Games so that part was the disappointing part so now that’s pretty much what Team USA and other countries deserve and that’s where we are.”

Knierim added: “No matter what and where, the athletes will just be grateful for now to keep their medals.”