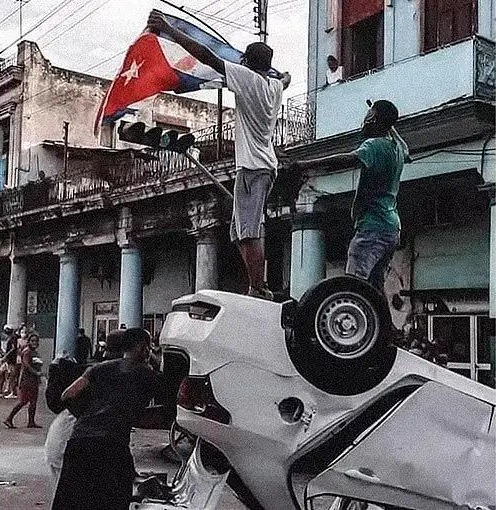 Boy with flag during 11J protests escapes from Cuba

HAVANA TIMES – An iconic image from the protests that took place in Havana on July 11, 2021 (11J), shows an overturned police patrol car and two youths standing on it, one of them waving a bloodstained Cuban flag . The identity of this protester had remained secret until now. His name is Elias Rizo Leon and he is 16 years old. In August 2021 he fled Cuba with his family and after months of travel he reached Madrid.

According to Justicia 11J and the archives of Cubalex, 13 minors in Cuba have been charged with sedition, including those who took part in the protests in Toyo, in the municipality of Diez de Octubre, where the emblematic photo of Elias was taken.

The escape was his mother’s idea. If the plan had not materialized, Rizo Leon would be in prison, like Kendry Miranda Cardenas, Lazaro Noel Urguelles Fajardo, Rowland Jesus Castillo Castro, Brando David Becerra Curbelo, Brayan Piloto Pupo and Giuseppe Belaunzaran Guada, minors sentenced to more than 10 years in prison.

“The first thing you should know is that I am a patriotic Cuban and I am proud to be born in Cuba, and despite the history of my country, that does not dishonor me; they are the enemies, the ones who must be expelled,” said Rizo Leon CyberCubain his first statements to the press.

The teenager and his mother, Ana Leon Hernandez, told reporters what had happened and the uncertainty in which they have lived since 11J, both in Cuba and abroad.

Rizo Leon describes himself as someone who is interested in politics. On July 11, he took to the streets alone, without his parents’ permission and with a Cuban flag hidden under his white T-shirt.

The flag was a relic for him, he had taken it to his school in Diez de Octubre when he was in 8th grade. “This flag was in my high school in Santo Suarez. I took it and said to myself: no one deserves this flag more than me, and I put it away.

When protests broke out in San Antonio de los Baños, Elias was still sleeping. He learned what was happening from his parents who spoke about the riots. and he came out despite his mother’s prohibition to do so.

“I got excited and said, it’s now or never,” Elias told reporter Monica Baro. His plan was to reach the Malecon, but he decided to stick with the crowd coming down the hill from Jesus del Monte.

Elias also heard gunshots nearby. At this time, he hid behind the column of a door and prayed to God. “I thought of my family, not of me (…), and I started to pray because I am a Christian. Not a single bullet hit me. In the heat of the moment, Elias shouted: “Down with communism”, “Damn communists”, “Fatherland and life (homeland and life)and “Freedom for Cuba”, slogans that were in the language of many Cubans.

The episode of the overturned patrol car is crystal clear in his memory. He believes that police cars are a symbol of repression and said to himself: “they have not been used for any good, just to repress us, to extract money from the Cuban people, to beat us and to make police go where they please. .”

The police had left the car before it was overturned. They fled in other patrol cars or in “MININT vehicles”, the teenager said.

Elias watched as other young people flipped the car. Then he threw a rock at the rear window of the patrol car and suffered a cut on his right hand, which he said needed stitches because it was so deep.

He then ran to San Leonardo Street and took out his flag to bandage his injured hand. It was there that he had the idea of ​​climbing on the roof of the car. “” I had the good idea to see the blood and the overturned police car and I said to myself: I’m going to get on it and wave my flag with my blood, the blood of all Cubans, of a demonstrator of 11 July. ”

“I waved the flag and shouted”patria and vida and freedom.“I was afraid for my parents. I didn’t care what happened to me, but I cared what happened to my sister, my mother, my father or my friends, because I know they put pressure on friends. I was nervous and the crowd screamed with me,” Elias added.

Escaping from the scene was a risky business. Several people were watching from windows and rooftop terraces, but there was not a single open hallway to hide in. Fleeing was the only solution because the police had released their dogs. The dogs that Elias identified as German Shepherds “who were crazy”.

RUSSIA AND THE ESCAPE ROAD

Rizo Leon’s family flew to Russia on August 25, 2021, a country that has abolished visa requirements for Cubans. After the protests, Ana Leon Hernandez was pressured by State Security and interrogated.

She made the decision to leave the country to save her son when she saw him come through the door with his bloody hand on 11J. She took the flag and washed it to get rid of the evidence, and she kept Elias away from state security, in hiding.

“We had been under pressure since 11J, we were scared and we were uncertain. We didn’t know what was going to happen, but we knew it was going to be bad,” Ana Leon revealed. Several lawyers recommended delivering Elias, but she refused: “I gave birth to him and I’m not giving him up,” she said.

She had her first encounter with state security on August 4. Two agents had been trying to find her for a few days, but she was at work. Ana lied to them that day. “I tried to make them feel that I was going to take my son to the station. I told them that Elias had been in Santiago for a month, that we were from there. One of them told me that he was not convinced and that he would speak to his superior,” explains Ana.

The harassment of the Cuban political police has become incessant. The officers showed up at night, in the morning too; they couldn’t see her often because she wasn’t home.

One of the officers, to whom Ana had given her phone number, threatened her and told her that if they did not go to the Aguilera police station, in Diez de Octubre, they would surround Elias and l would stop anywhere in Cuba. . She asked them for proof that her son had committed a crime, but the police refused to give her this information.

On August 9, she was officially interrogated. They asked him when Elias was coming back and the address where he was staying in Santiago de Cuba. Ana refused to answer this last question, claiming that her child was a minor and that she had to be with him if they wanted to take him to justice. His interrogator told him that the interview with Elias had nothing to do with July 11, that they wanted to see him for something else.

In this regard, Ana said, “I never trusted them. This is their working mechanism, they try to inspire confidence, so that you think that nothing will happen, that everything will be fine. That these are just a few simple routine matters, of which you have nothing to fear; but everything is a lie. I knew that wouldn’t happen, that as soon as I went there with Elias it would be over. You can see it now. It was intuition. »

In Russia, the family hid for months, received help from friends and relatives, and worked illegally. Then they arrived in Spain. They are considering seeking political asylum there because they say there is a Cuban community there and they feel safe.

Immediate plans include Elias and his 11-year-old sister returning to school, which they had to quit when they left Cuba.

Elias does not regret his behavior on 11J; here is what he had to say about it: “I did what I did because it was in my heart, for my cause and for all of us who long for freedom. I felt free at that moment and cried out the truth.