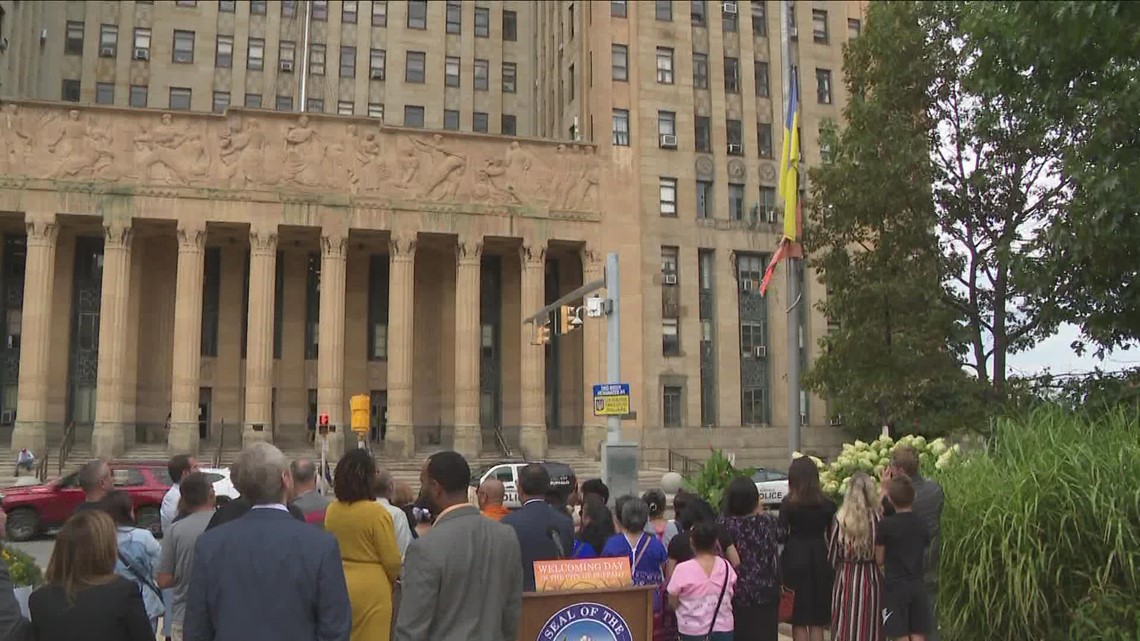 The event was organized to recognize the importance of welcoming immigrants and refugees to the city of good neighbours.

BUFFALO, NY – It’s National “Welcome Week” across the country and in Buffalo on Tuesday a ceremony was held to recognize the importance of welcoming immigrants and refugees to the City of Good Neighbors.

From the time Poles and other Eastern Europeans settled on the East Side in the 1920s, to the Irish in the former First Quarter in earlier years, Buffalo has traditionally been a place of landing for immigrants.

During the ceremony held in Niagara Square, members of a small crowd sang the Ukrainian national anthem, emblematic of the latest wave of those seeking the American dream in Western New York.

“I see your hopes, your dreams and your struggles. I know how you feel about being in such a foreign place. Because I felt that too,” said Karina Krantz, who came from Ukraine in the United States as a child with her family after a Chernobyl nuclear disaster.

“A lot of people were getting sick and I was sick when I was very young,” she recalls, explaining that her family also came “to have a chance for better.”

Years later, 27 to be exact, she now has a husband, a son and her own business, and is involved in activities to help other refugees.

Also among those present was Oleksandr Olyiinyk, who arrived in Buffalo just three days ago with his wife and 9-year-old daughter.

They too came from Ukraine, because of the ongoing war with Russia.

“We had a rocket attack near our house and after that we decided to go to the United States,” Ms Olyiink explained.

They are staying in Lancaster with Oleksandr’s distant cousin, who is married to Wasyl Puhacz.

“The first thing they try to do is find work,” Puhacz said. “They want to support themselves.”

According to Puhacz, Mr. Olyiink was a sales manager for a major liquor distributor in Ukraine.

“Obviously he won’t be able to find that kind of work here because of the language barrier, so he’s going to look for a job as a truck driver,” he said.