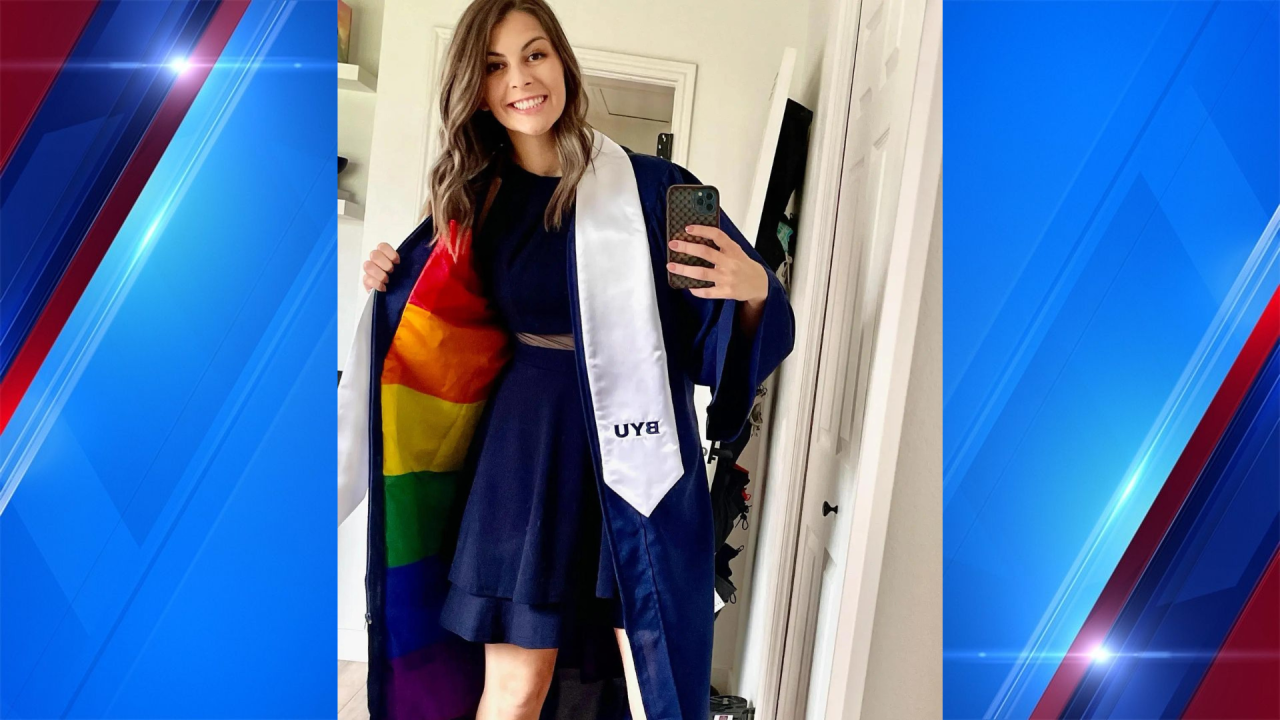 “I thought maybe a few BYU students or friends would post pictures of it,” Orr says. She goes on to say that most of the responses she has received have been positive; most people showed Orr’s validation, love and support.

Orr served a full-time mission for The Church of Jesus Christ of Latter-day Saints in Eugene, Oregon. She said most of the negative attention she received came from people she met on her mission. “It showed me who’s on my island and who’s not,” Orr says.

When asked if she was afraid to wear her insignia at the start of BYU, Orr said she was “really anxious.”

“I understood that there would be consequences, but I didn’t know what they would be. I didn’t know if I would be tackled, escorted off stage, or what. Orr says she was also worried that her psychology degree would be compromised by her statement.

Despite her fears, Orr accepted the unknown consequences for doing what she “knew was right.”

In a facebook Publish, comments Orr as someone who identifies as bisexual, saying, “It’s scary to live with the fear that at any moment they could take your degree away from you.” Orr refers to BYU’s honor violation coded may result in the immediate suspension of student status and even the freezing of student transcripts.

Orr hopes BYU will change this and other policies regarding LGBTQ+ students. She referenced how even open members of the LGBTQ+ community are allowed to participate in parts of LDS Church membership, and compared that BYU’s policy is a kind of zero tolerance. Orr mentioned a friend of hers who she says was falsely accused of being in a same-sex relationship while attending BYU, and how he was called into the honor code office and questioned for “acting on the same-sex attraction. “I feel like it violates individual rights,” Orr says.

Most Utahns are probably familiar with the rainbow flag as a symbol of LGBTQ+ pride, but may not know how the flag was created.

According to a article by Nora Gonzalez on the Encyclopedia of Britannica website, the design dates back to 1978. Harvey Milk, one of America’s first openly gay elected officials, commissioned artist Gilbert Baker to design a “symbol of pride for the gay community”. Gonzalez writes that Baker would have chosen the rainbow because it is in some ways “a natural flag of heaven”.

Gonzalez reports that the very first version of the Rainbow Pride Flag was unfurled in San Francisco on June 25, 1978. Due to the handcrafting of the flags and the resulting lack of supplies, the pink stripes and turquoise from Baker’s original design have been removed. This modified version of the rainbow flag remains the most frequently used flag to symbolize LGBTQ+ pride.

For Orr, the pride flag means “to be authentic and to be seen as who you are as an individual.” She said it symbolizes “being recognized for what you were born into, not what you choose”.

Orr tells all Utahns that “true love for an individual is more than just saying you love and accept them.” She mentions other acts of love that should be shown to loved ones in the LGBTQ+ community, such as attending important life events such as weddings and letting children know their LGBTQ+ identity.

Orr hopes to use his BYU degree in psychology to pursue a career in motivational speaking. She hopes to inspire her audience to be authentic themselves.

BYU has yet to make a public statement about Orr’s pride.