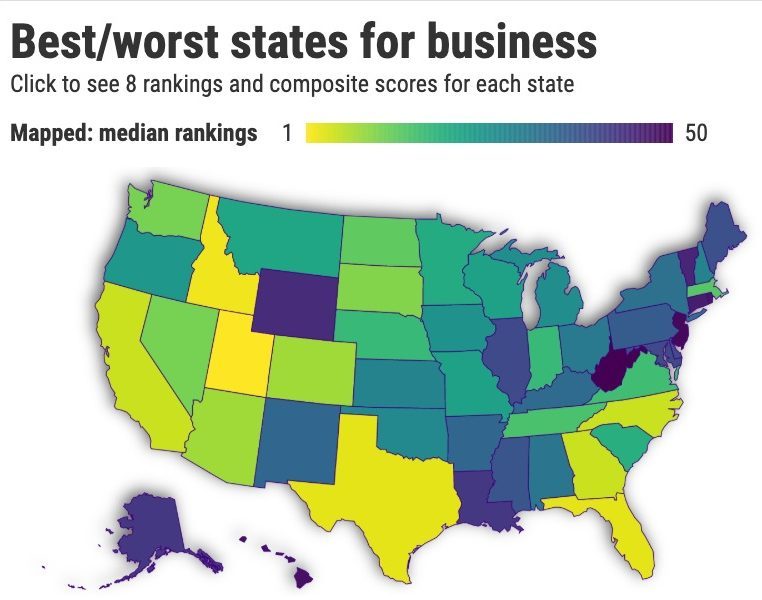 So, is California a good place to do business?

Well, my trusty spreadsheet is certain of one thing. No state differentiates opinions about the quality of its business climate more than California.

A review of eight state-to-state scorecards revealed a large division when scoring the Golden State’s economy. Rankings have gone from being the third best place to start a business in a WalletHub study to being dubbed the worst place to do business by a CEO magazine survey.

To understand the extent of the disagreement, think about how California scored in my ranking. When evaluating the state using the median, or midpoint, of the eight rankings, California had the fifth best economy. When the average score was used instead, the Golden State placed 16th.

Both results place California in the top third of state economies, an enviable position. Yet the underlying differences are hard to ignore.

Only Wyoming came close in terms of shared thinking with its # 44 and # 34 rankings. (Warning, math geeks: California’s “standard deviation” was also the highest!)

Note that my rankings of the rankings showed some overall consistency: the median and middle rankings each had similar names at the top – Utah, Idaho, and Texas – and at the bottom – West Virginia, New Jersey, and Hawaii.

Why such a divergence for California? Keep in mind that rankings are partly scientific and partly artistic, so the study author’s worldview is often an unspoken factor.

A few variances can be related to the way expenses are weighted in a dashboard, which is not a plus for dear California. And do the embarrassing economic inequalities of the state matter?

And then there is what I will politely call the â€œeconomic philosophyâ€ built into some of these rankings. Progressive California policies do not do well with certain types of businesses.

At the very least, this muddled math is a good example of why the state is such a flashpoint for so many heated debates, especially economics. Consider the California ratings, from best to worst …

Kaufmann: No. 4 for Small Business Success, defined as the share of a new business making a payroll in two years. Summits: Maine, Washington and Oregon. Worse? Delaware, Louisiana and Mississippi.

Forbes: No. 7 in a study of growth rates of gross domestic product. Summits: Utah, Washington and Idaho. Worse? Wyoming, Hawaii and Alaska.

Map / Motley Fool: No. 11 as a place to start a business. Summits: Montana, South Dakota and Florida. Worse? Connecticut, Virginia and Rhode Island.

I will note that California leaders – political and business – should not overlook the weaknesses revealed by the rankings. But there also seems to be a lot of mathematics supporting the state’s economic bragging rights.

Jonathan Lansner is the business columnist for the Southern California News Group. He can be contacted at [email protected]