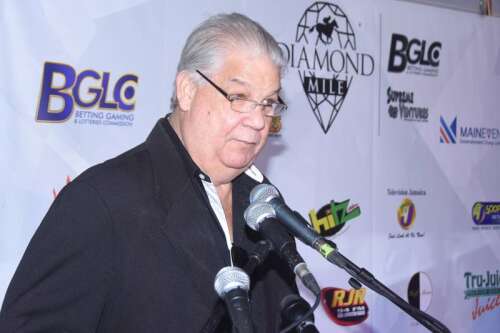 SUPREME Ventures Racing & Entertainment Limited (SVREL), the sole promoter of horse racing in Jamaica, hosted a flag lowering ceremony in honor of the late Christopher Armond, who was a pillar of the sport.

The brief ceremony took place on the track before the start of racing on Saturday.

Following in the footsteps of his grandfather Altamont and father Joseph, Christopher Armond has spent his entire professional career in the horse racing industry in Jamaica, Barbados and Trinidad and Tobago.

He started as a racing commentator before moving into administration and was known for his unwavering commitment to the sport and his spirit of innovation. He retired from his position as Director of Races at SVREL just over a year ago and was honored with a trophy race, The Chris Armond Sprint.

“Oh my! ‘Mr. Armond’ is what I’ve called him ever since I met him. I knew the voice before I came to Supreme Ventures and Caymanas Park. He was a great historical mentor and the voice of Caymanas You know ‘Spuddy’ [Brian Rickman] took over but he [Chris Armond] was the voice of Caymanas for me – and that’s a big loss for the industry.

“I know he was working with the regulator [Jamaica Racing Commission] in a consulting capacity now, having retired, and he’s going to be missed because he’s taken years with him – over 49 years of experience – and the industry is going to miss a pillar, someone who. .. has dedicated his life to the industry, here and abroad in Barbados and Trinidad. My condolences go out to his family at this time,” Gooden told the Jamaica Observer during the ceremony.

Howard Hamilton, president of the Thoroughbred Owners and Breeders Association (TOBA), described Armond as an icon of the sport.

“He has been one of the most outstanding contributors to the racing industry for many, many years – from his family to come – and there are no words that can express how much we can appreciate the contribution he has made to the race,” he said.

Starter Michael Simms, who was also present at the ceremony, said Armond was “a legend” in horse racing.

“Chris Armond was a man who you could call ‘Mr Racing’. The few years I worked with him, this man was a wealth of knowledge. He taught me a lot about his racing experience.

“He was a warm person and he’s someone we should have something like a book or something, just to have all of his experiences properly documented. He’s a great man and he will be missed by everyone,” Simms said.

A longtime friend of Armond, Alden Tomlinson, tractor driver at the Park, also came to pay his respects to Armond.

“Mr Chris was a gentleman, believe me, as I worked with him for many years. I mean, when Chris tells you to do something, that’s exactly what you have to do. He’s not someone who gets angry easily – he was a kind and passionate person and I missed him so much. When he left the race and came back it was him and me as I never left him, and my condolences go out to his family and friends,” Tomlinson said.

(Left to right) Denzil Miller, race secretary; Loran Gooden, General Manager; and Fabian White, chairman of the grooms, at the flag lowering ceremony honoring the late Christopher Armond at the track on Saturday.