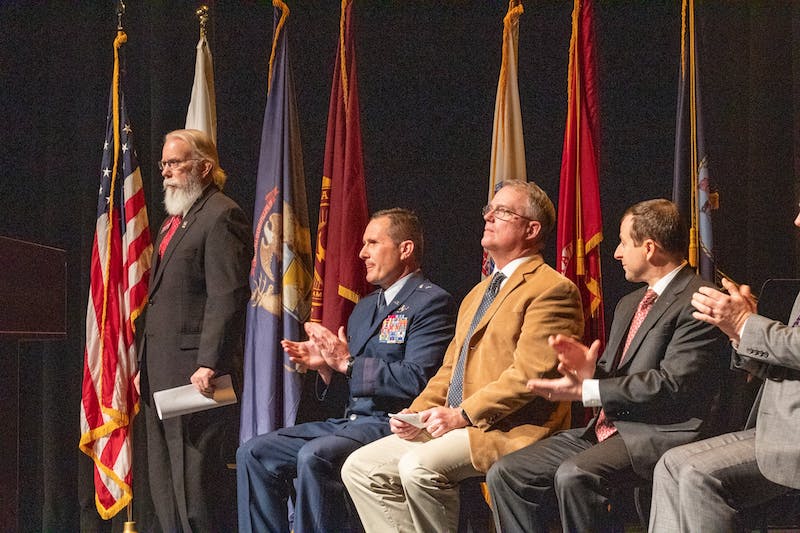 Central Michigan University is hosting Veterans’ Week events Nov. 7-11. This year a new program has been added, the Raising of the Flag of Honor for former CMU student Gerald Oehnke.

â€œThe raising of the Flag of Honor is something new this year and is a special request from Mr. Oehmke,â€ said Veterans Resource Center director Duane Kleinhardt. “Whenever a veteran dies, the military provides him with an American flag to drape (over) his casket before burial.”

Oehnke graduated from CMU in 1958 with degrees in social sciences, history and English. He served in the United States Navy during World War II and worked as a teacher in the Michigan education system. His last wish was to fly his flag of honor on CMU.

CMU will honor Oehmke’s wishes and fly its flag on campus for 24 hours at 10:30 a.m. Thursday at the flag pole near Warriner Hall.

The CMU ROTC (Queen’s Guard) honor guard will ceremoniously lower the CMU and United States flag and raise the flag of honor.

Kleinhardt said that during the event, the Queen’s Guard will enter with all the flags of the different services, including the New Space Force and the American colors.

CMU President Bob Davies will attend the flag raising, along with a guest from the Michigan National Guard. A brass quintet from the School of Music will play songs from the different branches of the service.