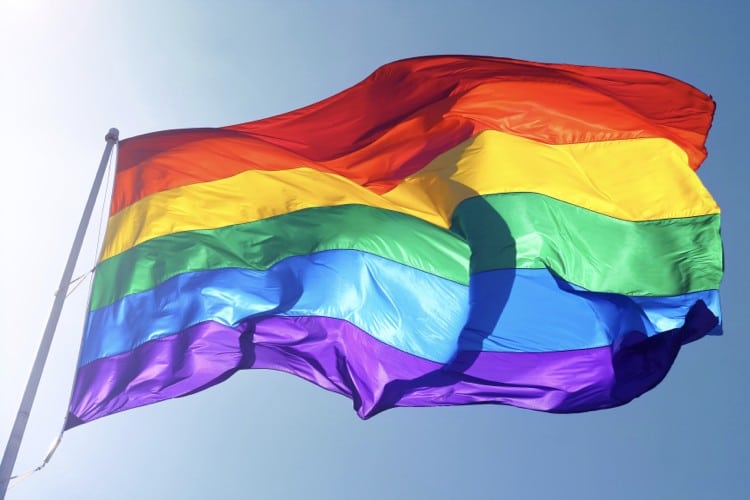 Chasten Buttigieg, the “husband” of US Transportation Secretary Pete Buttigieg, is a child groomer.

A 2019 video that surfaced in multiple reports this week shows the effeminate man mocking the American flag pledge of allegiance by asking children to pledge the rainbow flag.

Chasten Buttigieg, whose real last name is Giezman, appeared at the event on behal Iowa Safe Schools, a pro-gay and “transgender” outfit that seeks to cement in children the false belief that their disorderly desires and their beliefs are “normal”.

The pledge video is a chilling image of the gay movement’s success in grooming children.

“I pledge my heart, to the rainbow, of the Not So Typical gay camp, a camp full of pride, indivisible, with affirmation and equal rights for all,” Chasten says, the kids repeating after him.

It was recorded on post-millennium reported, at the Iowa Safe Schools Governor’s Annual Conference on LGBTQ Youth.

The children applauded at the end of the pledge. Buttigieg – again, his real surname Giezman – waved a rainbow flag, the banner under which gay activists and other sexual deviants march.

He appeared at the event as the man he lives with, Pete Buttigieg, was running for president.

“At camp, Buttigieg gave a short interview about her campaign with her husband Buttigieg, who was running to be the Democratic presidential nominee that year,” PM reported.

“Being on the track gives me the opportunity to do things like that,” Chasten Buttigieg said. “Like, put the wind in my sails.”

PM reported that Buttigieg, a middle school teacher, “made a sex joke”.

The pledge video is so radical, and Buttigieg’s performance so disturbing, that even the Log Cabin Republicans, a GOP affiliate for gay people, called it out: “Whatever it is, we don’t want it.” Hands off, @Chasten.

The gay teacher also gave a 13-minute speech to prepare children for the “Iowa Safe Schools Virtual LGBTQ Graduation on June 26, 2020.” One of the speakers was a “queerdictorian”.

“As I’m sure some of you can imagine or maybe even have seen or read about it, I myself have received criticism from everywhere, including from extreme conservative figures. right like Rush Limbaugh, who like to wonder whether or not the country was ready not to see a presidential candidate kissing her husband on stage,” he said:

And the answer, of course, is yes, the country is ready because Pete won Iowa. But that’s not the point. Don’t let distractions and nastygrams of homophobes or transphobes get in the way. They are just roadblocks. Walk around them.

As bad as Buttigieg’s access to children may be, that of the Iowa Safe Schools is more dangerous.

“Much of the Twitter feed for Iowa Safe Schools is about the T, not the LGB, of the acronym,” PM reported. The grooming outfit pushes a dangerous agenda to brainwash children into thinking they are either gay, “transgender” or “non-binary.”

“The Curriculum Kit brings a variety of books to schools, including those for kindergartens, to let them know that their minds can be dissociated from their bodies, such as Jacob’s new dress“, PM reported:

There are also shirts for sale on the Iowa Safe Schools site, with the motto “you can pee next to me”, “2 4 6 8 how do you know your child is straight?” and “non-binary guys, girls and friends”.

The Table of Contents of The Schoolwide Pride Guide: High School Edition, contains chapters on “The Genderbread Person”, “Understanding Privilege”, and the history of Pride. It tells teachers how they can go about “facilitating complex conversations and civil discourse,” how to start gay book clubs and what books to include, and how teachers can start GSAs or “daughter” clubs. heterosexual alliance”.

Whether Pete Buttigieg, who presumably wears the pants in the family, will shut down his “husband’s” national grooming campaign, at least to end the negative publicity, remains to be seen.

Sadly the ‘Buttigiegs’ have been allowed to adopt two babies to complete the charade, they can be ‘fathers’ and have ‘family’.