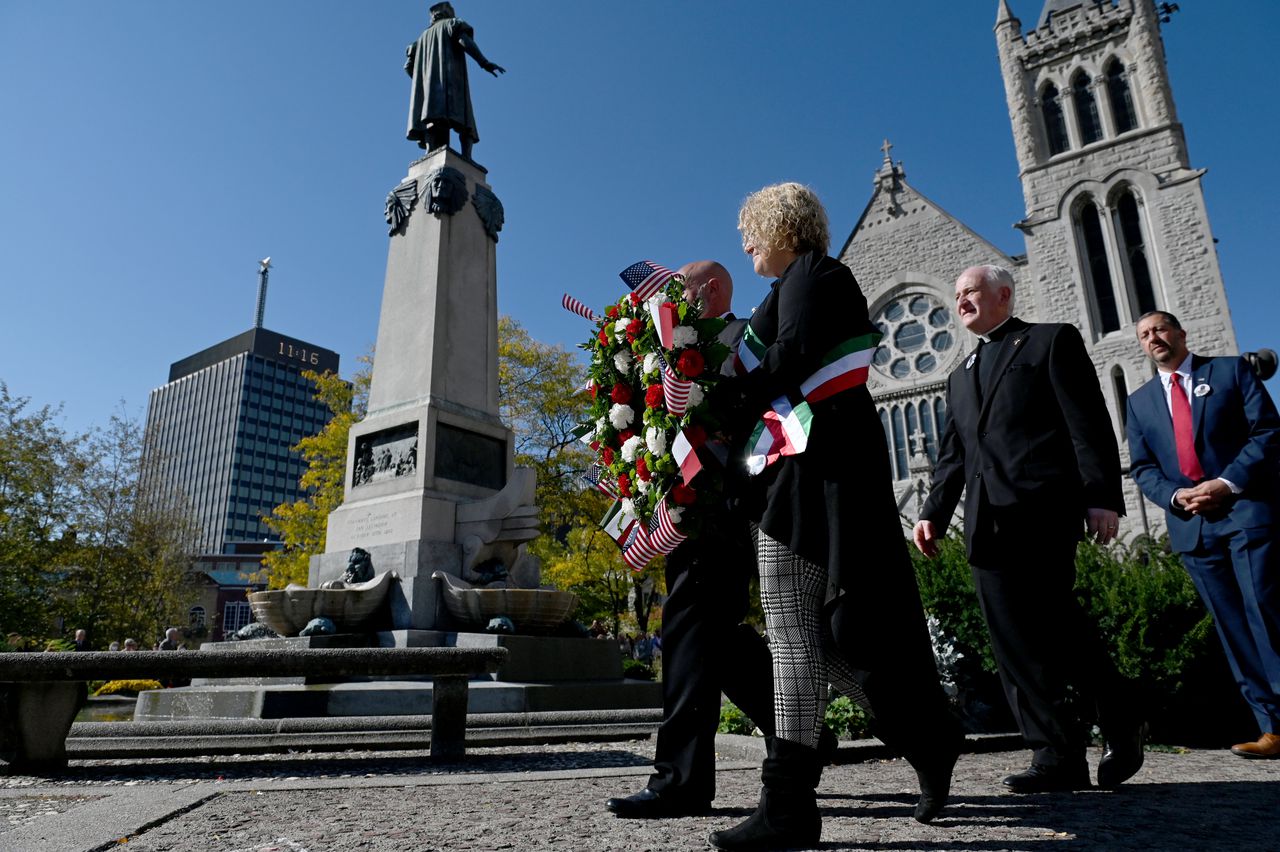 Syracuse, NY – Construction crews tore up and closed most of the streets around Columbus Circle on Monday. But that didn’t stop a crowd – many in their finest Sunday best and emblazoned with Italian flag pins – from making their way through the roadworks.

The crowd of around 400 gathered under the Christopher Columbus monument, some gazing at the towering silhouette or chatting in small groups as they wait for the start of this year’s official wreath laying ceremony in honor of Christopher Columbus and the Italian heritage in Syracuse.

The atmosphere was mostly festive, although a woman was holding a sign: “Save Western Civilization from Communism!”

It was the first time that a decades-old ceremony had taken place since a group of prominent residents sued Mayor Ben Walsh and the city over plans to relocate and replace the statue of Christopher Columbus.

Event organizer Nick Pirro, a former county executive and one of Walsh’s most vocal critics on the issue, said more people than usual were in attendance to support the cause of maintaining the statue in what they think is its rightful place.

The ceremony was followed by a luncheon at the Oncenter, where County Director Ryan McMahon and nonprofit leaders Leigh-Ann and John Tumino were honored for their contributions to the community.

â€œWe have our ceremony, it’s a beautiful day and we have a great lunch planned,â€ Pirro said. “And the rest is in court.”

Michelle George, whose Onondaga name is Gah-hon-no-neh, was the only protester among the crowd. She stood almost silently, waving a purple and white flag from a two-row wampum, representing peace between the Onondaga nation and the white settlers.

George said she preferred to see the statue of Columbus in a museum, but not because she wanted to offend descendants of Italian immigrants. She said immigrants and Onondaga have worked peacefully together in the past.

â€œBut we need representation for our own people,â€ she said. “I would like something better for our people to stand up here.”

One woman made it her mission to keep George’s flag out of sight, alternately stumbling in front of her and at one point trying to snatch the flag from her hands.

â€œIt happened 600 years ago. Get over it,â€ this woman said to George. She refused to give his name.

Syracuse City Councilor Pat Hogan, one of many local officials who attended the ceremony, said it was a shame the monument has become a subject of division. Hogan’s uncle was a musician who performed at the statue’s first ceremony in 1934.

One attendee, Tony Russo from Baldwinsville, agreed, saying he was thrilled to celebrate the statue, the man it represents and the story behind the two.

Russo, who grew up in the western part of Syracuse, said his grandfather was one of the many Italians in the area who helped pay for the construction of the statue.

“The money for the statue didn’t come from the city government, you know?” It came from donations from the population, â€he said, calling Mayor Ben Walsh’s attempt to move the statueâ€œ out of left field â€.