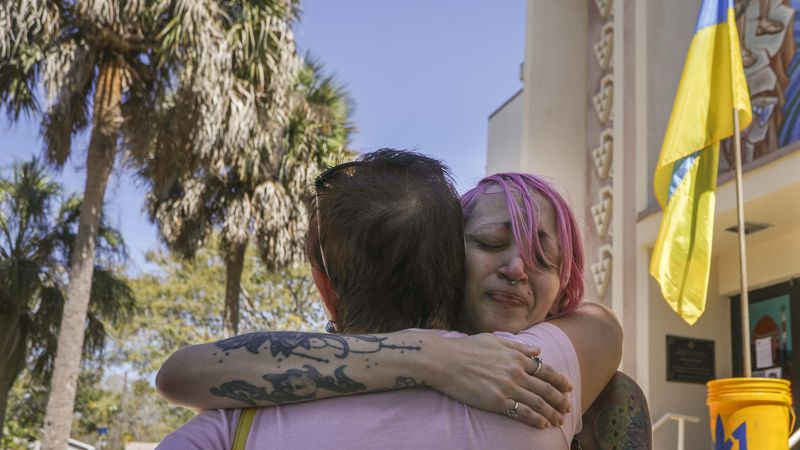 ST. PETERSBURG — After reading the gospel, before leading the Lord’s Prayer, the priest stopped and looked at the congregation. He couldn’t believe how many people had come, how many new faces there were.

On a typical Sunday, an average of 20 people show up for the first English service at the Epiphany of Our Lord Ukrainian Catholic Church. That morning, more than 50 people occupied the wooden benches, many of them wearing the blue and yellow of the Ukrainian flag. Another 100 came for the second service, which was in Ukrainian.

Some brought donations, toiletries and medical supplies to send as part of the relief efforts. Some had spent the weekend trying to find family and friends fleeing the Russian occupation. They all had to pray together under the golden domes.

“Over the past 10 days, Ukraine has shown the world its tough spirit, its desire for freedom as our nation demonstrates its patience and unity in this bloody war,” Father Bohdan Barytskyy solemnly declared. “We pray for the thousands of bomb and missile victims, but above all our hearts bleed for our cities, which are blocked by the enemy who do not allow people to leave and allow no supplies or food.”

The priest has led the church on N 90th Avenue since 2005. His wife and two children live with him at the parsonage across the street. But he is worried about his mother, his sister, his cousins ​​and so many friends who are still in Ukraine. “Today they shelled an area next to my house,” he said. “Everywhere, every day, alarms. My family spends their nights in the basements.

He wants the United States and other countries to establish a no-fly zone over Ukraine. He wants Polish planes to help fight Russian planes. He wants his compatriots to know: “The saints die but they keep the faith. Jesus said, ‘Do not be afraid.’ They can take your life but they can’t take your soul. Because your soul is immortal.

This war, the priest said, united his people – in Ukraine and abroad. “People want to protect our language, our culture, our traditions, everything,” he said. “This is our home. We decide what we do. Who can protect us? Only God.”

We’ll bring you the latest news and information you need every morning of the week.

He prayed for mercy, the pope, peace. He asked God to bless the Ukrainian army and all those who remain “to guard the fatherland”. He told his followers not to be silent.

“God, save Ukraine. God, send people wisdom and reason so that dialogue triumphs over war.

A young mother kept patting her 7-year-old son’s back, worrying about his parents who live just west of the fighting. An elderly woman in the back seat couldn’t stop crying.

After Communion, the priest invited everyone to get a poster and go to Fourth Street. “We must show our support and solidarity with other nations,” he said.

A dozen people carried Ukrainian flags to line the sidewalk. A dozen other painted placards brandished: “Punish Putin, not Ukraine”. “Hands off Ukraine.” “Stand with Ukraine.

The priest changed into his golden robe, then joined his parishioners at the protest. “We are peaceful. But we are at war,” he said. He looked down, shook his head, and said quietly, “Amazing.