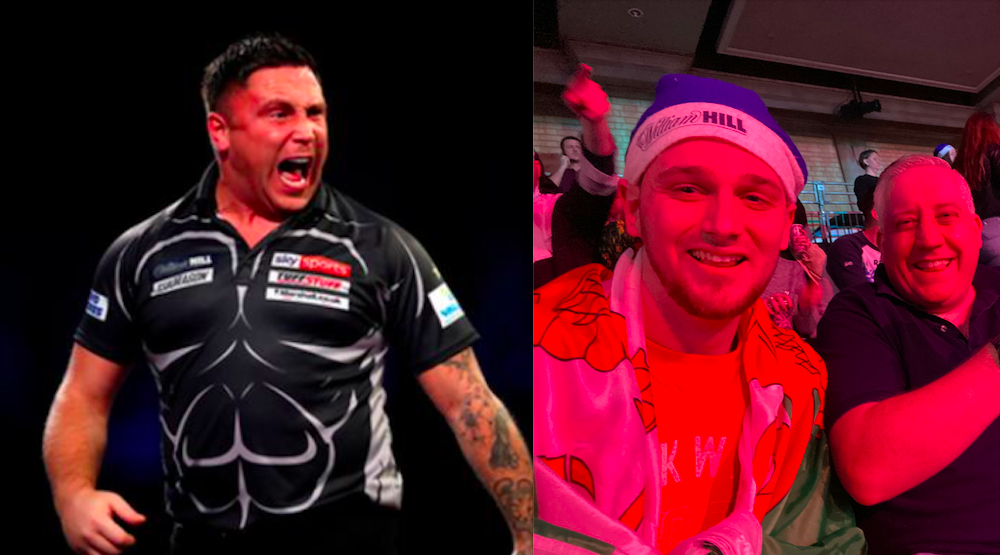 A group of Wales darts fans, who were at Alexandra Palace last night to support reigning world champion Gerwyn Price in his PDC World Championship quarter-final clash against Michael Smith, explained how they had been victims of despicable abuse because they had a Welsh flag.

Tyler Richards and two friends from Pencoed, who are big fans of darts and regularly attend events, were targeted by English fans who threw beer and threatened them at the end of the match because they were supporting the Welsh.

However, they are now saying authorities need to take action after the game and the atmosphere turned ugly as Price crashed into a thriller – despite a magical nine dart finish.

The English who were targeting us and throwing beer at us after the game because we had a Welsh flag are hilarious, great people honestlyðŸ¤£

At one point, as the Welshman looked set to clinch a place in the semi-finals, he stopped the game to signal to the referee a group that was mistreating him.

Throughout the week, Price was subjected to vile xenophobic chants and constant abuse.

Tyler believes the Professional Darts Corporation (PDC) authorities must now act urgently – both on Gerwyn Price’s abuse and on the drunken and ugly atmosphere in the crowd.

“During the match it wasn’t too bad with a few ‘sh * ggers sheep’ chants to us lightly, but the more the match progressed the more beer was consumed, it was more about celebrating in front of us every time. that Smith was gaining a leg / set and then in the last set it got pretty tense and a few boys behind us started to get pretty mean and then once the last dart came in they were pointing and celebrating in our faces.

“Then as we applauded both players and raised the flag for Gezzy to see, beers were thrown at us and dumped at us calling us sh * ggers sheep, a few tried to coil us up to fight back but we just let it be with beers thrown at us again.

“In the back of your mind you know everyone has had a drink or 10, so it could escalate very quickly and get out of hand, so we quickly got out of it.”

The Welsh darts fan said the vile chants Price faced during the match should be called what they were – hateful xenophobia.

â€œGezzy’s abuse was horrible,â€ Tyler said. “He’s been called by all names and told he’s the most hated person there, booing him constantly – except for the nine stinger they all loved, which is ironic.” . Then, as he made his throw, someone let out a high-pitched, high-pitched noise just as he shot it. Xenophobia at its best.

â€œGezzy’s abuse should never have gone this far, I think a lot of the onus is on the PDC not to take action. When they needed to really put that down, they just let it go and now Gezzy can’t play his game anymore because he’s playing more than his opponent these days. He must be treated so that he has the same fairness as everyone else. “

Tyler, who was at the game with teammates Matthew Roberts and Ian Burnell, made it to the quarter-finals early yesterday and will be in the semi-finals tonight and the final tomorrow.

The Welshman loves his darts and believes now is the time to move the world championships to other countries to avoid a repeat of the nasty scenes that were seen last night.

“I saw a suggestion about maybe moving the worlds to the Netherlands or maybe even moving them to a different country every year – maybe even the winner’s house – so that the crowds can be one. little fairer because we have definitely missed the Dutch and the Germans in the crowd this year, â€he said.

“Maybe another idea is to be a lot stricter on eligibility to buy tickets for tournaments, so it’s not easy to take a ticket at random, with tighter priority groups.”

Tyler admitted that despite the inconvenience of Gerwyn Price’s exit – both on and off stage – he looks forward to the rest of the World Championships.

â€œIt should be a Belter,â€ he said. “We can sit back and enjoy who’s going to be the winner now instead of being on the edge of my seat for Gezzy.”

In response to his loss to Michael Smith, Gerwyn Price issued a defiant message today, claiming he will come back stronger than ever.

In a post on his Instagram he wrote: â€œAbsolutely disgusted to come out in the last eight of the World Championships after working so hard the last few months. So proud of myself for just being me and playing the best I can even with all the obstacles in front of me.

â€œI will get stronger. I will come back better. I will train harder. I will sacrifice more. I will succeed. I will do whatever it takes to be the best.

“I’ll be back. The class is permanent.”

The Welshman also wrote that he now felt it was time to move the World Championships to other home countries and to Europe.

He said: â€œIt is only fair if the World Championships are played in each country. Wales, Scotland, Ireland, England, Europe.

“Next year in Wales please.”