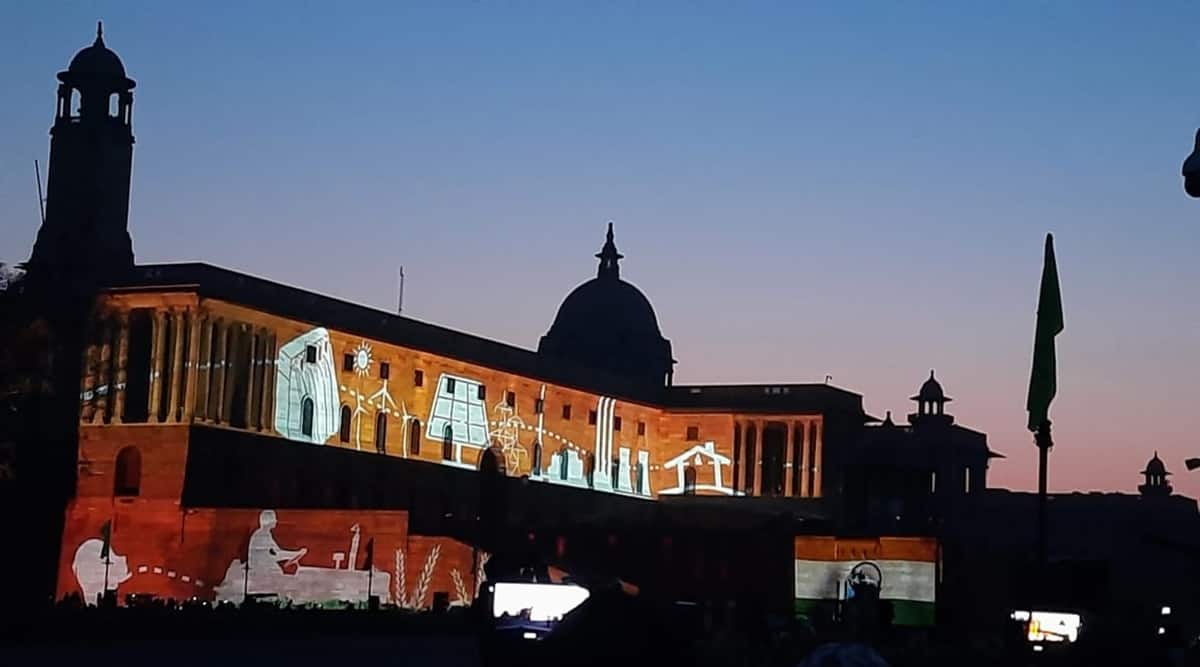 The “Beating the Retreat” ceremony, which marks the official end of Republic Day Celebrations, took place on Saturday at Vijay Chowk in New Delhi. The ceremony included drone shows and musical performances by military bands.

What activities took place during the “Beating the Retreat” ceremony?

This year, new activities including a drone show and projection mapping were introduced at the ceremony.

The new drone was a 10-minute show, involving around 1,000 drones made using indigenous technology, set to synchronized music. This fair is a “Make in India” initiative of a startup “Botlab Dynamics”, supported by the Indian Institute of Technology (IIT) Delhi and the Department of Science and Technology.

The Projection Mapping Show was a 3-4 minute event presented on the walls of the North and South Blocks prior to the end of the ‘Beating the Retreat’ ceremony.

A dress rehearsal for the Beating the Retreat ceremony at Vijay Chowk in New Delhi on Thursday. (Express Photo: Tashi Tobgyal)

For this year, the government has dropped “Abide With Me”, the dark climax to the conclusion of the Republic Day celebrations. Written in the pre-modern world by Henry Francis Lyte, a Scottish Anglican minister and son of a sea captain, the anthem has been sung often and has been an integral part of the Indian Beating Retreat ceremony since 1950. Played at dusk, it is also the last piece before the retreating buglers bring down the Indian flag.

Meaning of the Beating the Retreat Ceremony

The military tradition began in 17th century England, when King James II ordered his troops to beat drums, lower flags and hold a parade to announce the end of a day’s fighting.

The ceremony was then called “mounting the watch” and took place at sunset after firing a single bullet from the evening pistol.

Rehearsal for the laser show before the “Beating the Retreat” ceremony. (Express Photo: Tashi Tobgyal)

“Beating the Retreat” also marks the final ceremony of the Republic Day celebrations, which began on January 23 with Prime Minister Narendra Modi’s unveiling of the holographic statue of Netaji Subhas Chandra Bose at India Gate.

Traffic diversions in Delhi due to the ceremony

Due to the “Beating the Retreat” ceremony, traffic restrictions have been put in place on Saturday from 2 p.m. to 9:30 p.m. Vijay Chowk will remain closed to traffic, Delhi traffic police said in a notice. Traffic was also not allowed on Rafi Marg between Sunehri Masjid roundabout and Krishi Bhawan roundabout.

Metro services from Central Secretariat and Udyog Bhawan metro stations on line 2 will not be available from 2 p.m. to 6:30 p.m., the DMRC had previously announced.

Buses were diverted from their normal routes from 2 p.m. to 9:30 p.m., according to the notice.