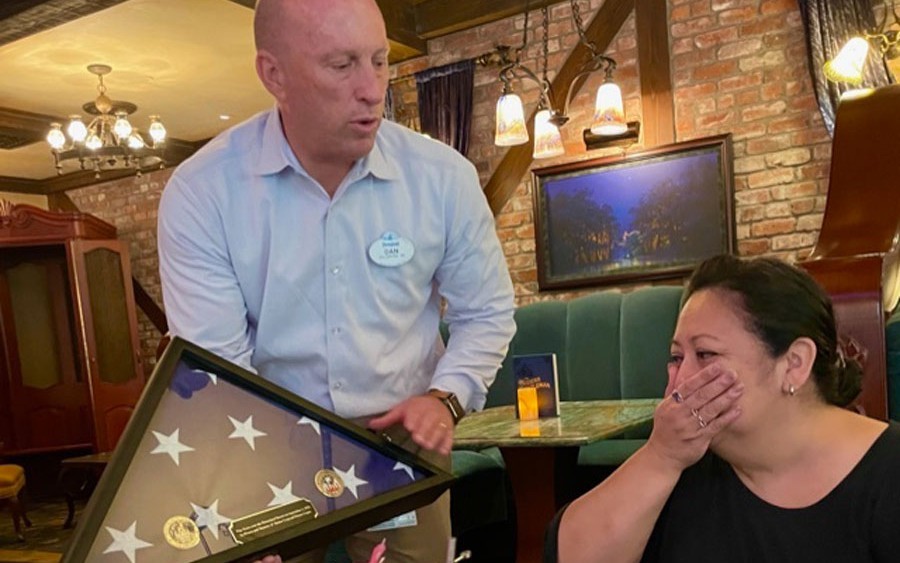 Disneyland paid tribute to a US Marine who died in Afghanistan in the Kabul airport attack who was a longtime annual pass holder and big Star Wars fan who wanted to be buried with the personalized lightsaber which he built at the Anaheim theme park.

Marine Corporal Hunter Lopez, 22, of Indio, was one of 13 U.S. servicemen killed on August 26 in a suicide bombing that claimed the lives of at least 60 Afghans at the Kabul airport in Afghanistan. Lopez was laid to rest at Riverside National Cemetery on Saturday, September 18 after a funeral procession.

â€œBut I just couldn’t find the courage to part with the lightsaber he built,â€ Alicia Lopez told the Disney Parks blog in tears.

Less than a week after the deadly attack in Afghanistan, the Lopez family visited Disneyland on September 1 to build a replica of the lightsaber at Savi’s workshop in Star Wars: Galaxy’s Edge that was buried with him.

â€œWe don’t know if it was Disney magic or if it was Hunter, but either way, it felt good to know he was there with us,â€ Alicia Lopez told the Disney Parks Blog. .

Friends who work for the Riverside County Sheriff’s Department and are members of the 33 Club arranged for the Lopez family to rebuild the lightsaber in a private session at Savi’s workshop.

During lunch at Club 33’s exclusive private club, Disneyland VP of Safety Dan Hughes presented the Lopez family with the American flag flying above Disneyland – which had been quickly framed with a plaque in honor and memory of Hunter Lopez.

â€œMrs. Lopez broke down in tears and said, ‘My son loved Disneyland,’ and the whole room choked,â€ Hughes told the Disney Parks Blog. â€œI said, ‘Your son’s sacrifice means the world to our country and also to us at Disneyland, and it is our honor to give you this token of our appreciation. “”

During the family’s visit, Club 33 lined up 13 glasses of champagne on a service counter in tribute to the 13 soldiers lost in the attack on Kabul airport.

Hunter Lopez was a longtime annual pass holder who loved coming to Disneyland since he was a toddler, according to his mother. His favorite trick was the Mad Tea Party teacups and he loved Winnie the Pooh so much that his mom nicknamed him “Hunter Pooh”. But his real passion was Star Wars.

“He would dress up as a Jedi for Halloween,” Alicia Lopez told the Disney Parks Blog. “He knew all the movies, all the lines, even the background characters.”