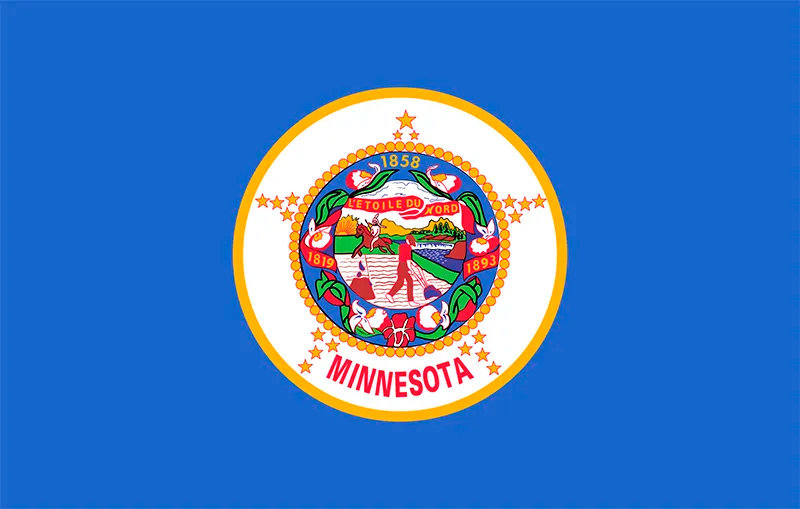 Does the Minnesota flag need a makeover?

REGIONAL — The rumbles that Minnesota’s flag could do with a redesign are being felt again in the state Legislature as a bill introduced last year by Rep. Peter Fischer, DFL-Maplewood, gained ground during the current session.
Fischer has been studying the flag issue since 2017, when two high school students presented him with a list of problems with the design, which does little to easily identify and distinguish Minnesota from the flags of nearly 20 other states. In fact, an association of flag experts, the North American Vexillological Association, ranked the Minnesota flag among the ten worst flags among US states and Canadian provinces.
“The drawing is not simple: no child could draw it from memory,” wrote Thomas Atkins, one of the students who contacted Fischer. “In addition, the flag uses seven colors, more than the three or four generally recommended, and contains a prominent seal. This overly complicated design obscures any symbolism the flag intends to convey. Writing “Minnesota” on the flag only compounds the problem, since effective flags do not need to write the name of the region they represent to invoke their meaning. Finally, to the average person, the flag of Minnesota is indistinguishable from 19 other state flags, all blue backgrounds with overly detailed state seals.
Minnesota didn’t have a flag when it became a state, and it wasn’t until the Chicago World’s Fair of 1893 that state leaders held a contest for a state flag that could be used in a competition at the fair. The state seal, whose origin dates back to territorial times, was chosen to be displayed on a white field, and it remained the defining feature of the banner when it was redesigned in 1957 and again in 1983 when the seal was changed and standardized.
The seal itself is problematic for many natives and non-natives who perceive the images it contains as racist. It depicts a white farmer plowing the ground in the foreground, while in the background an Aboriginal rider on horseback comes out of the scene. The austere division emphasizes the triumph of the early pioneers over the age-old inhabitants of the land. A 2020 guest column in the Minneapolis Star-Tribune written by Mark Grindy bluntly described the message conveyed by the images.
“This is not an attempt to honor our heritage or our history, but to erase it,” he said. “The truth is, state-sponsored violence against people of color is not just part of Minnesota’s history, it’s at the heart of it.”
Fischer notes that the state flag and seal should have a branding element and be instantly recognizable symbols as Minnesota.
Fischer’s bill would create a State Emblems Redesign Commission to “develop, design, and recommend to the Legislature and the Governor a new design for the official seal of the state and a new design for the official flag of the state.” state…that accurately and respectfully reflect Minnesota’s shared history, resources, and diverse cultural communities. The target of May 11, 2023 is set for the adoption of a new flag and a new seal.
The 14-member commission would include four legislators, three members of the public appointed by the governor, two members appointed by the Council of Indian Affairs, one from each of the state’s three ethnic councils – the Council of Minnesotans of Asia-Pacific, the Latin American Affairs Council and the Council for Minnesotans of African Heritage – and one member each representing the Dakota and Ojibwe communities.
The bill sat on the House state government’s finance and elections committee for more than a year before the committee passed it along party lines and sent it to the pathways committee. and House pleas last week. An accompanying bill introduced in the Republican Senate has yet to be implemented.