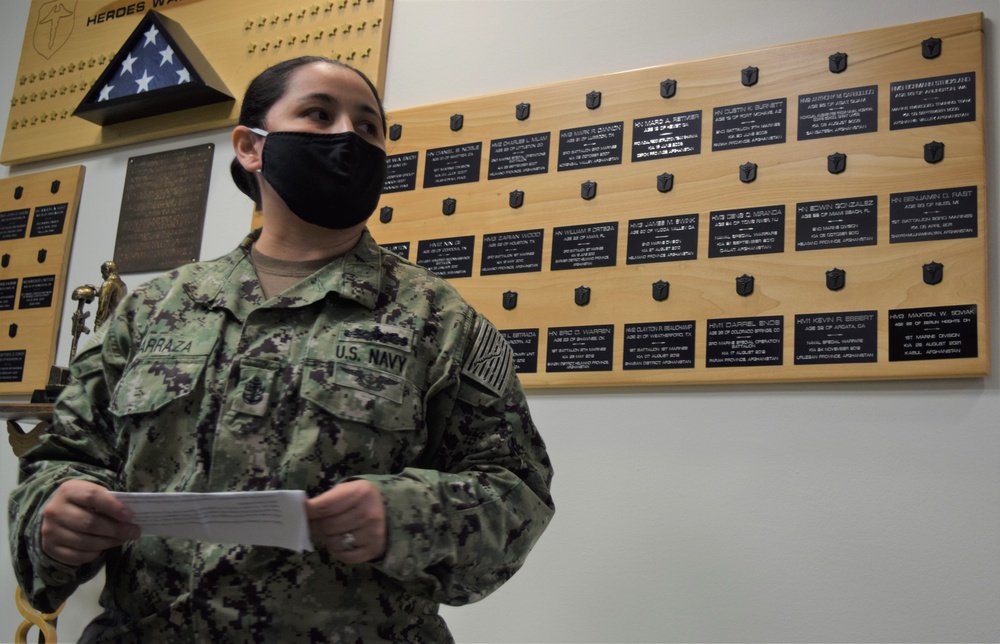 When Naval Hospital Bremerton unveiled its Hospital Corps Heroes Wall of Honor in 2015, it was a heartfelt and sacred gesture to remember members of the Naval Hospital lost after 9/11.

Another name has been solemnly added to the names engraved on the memorial site.

“At his last duty station, Soviak was assigned to 1st Marine Regiment, 1st Marine Division. He was deployed to Afghanistan. He was killed during his mission to help evacuate civilians. He was posthumously awarded the Corpsman Purple Heart and Fleet Marine Force War Badge,” said Elizabeth Barraza, Chief Hospital Corpsman, event coordinator for the Chief Petty Officer Association.

Soviak was among 13 US service members killed that day and 18 others injured in the blast.

The ceremony included a presentation of the flag by the NMRTC Bremerton Color Guard detail – Hospital Corpsman 1sr Class Curtis Lee Boney and HM3 Joshua C. Herbert – to honor the memory of the deceased corpsman, a wreath by the Command’s Hospital Corps Ball Committee – HM1 Paul Delacruz and HM1 Matthew Hanley – as well as the sentiments shared by the management of NMRTC Bremerton.

“We didn’t know him, but he was one of us. He was only 22, from the small town of about 600 [residents], Berlin Heights, Ohio. We were convinced that we had to keep his memory and his legacy alive. We share and mourn his loss,” remarked Captain Patrick Fitzpatrick, Commanding Officer of NMRTC Bremerton, noting that there are 57 names engraved on the Hospital Corps Heroes Wall of Honor, all of which share two distinctive traits.

The first is that they are all members of the United States Navy Hospital Corpsmen.

The other is that they were all lost serving their country in times of war.

“From battlefields in Iraq to firefights in Afghanistan, while supporting Operation Enduring Freedom, Operation Iraqi Freedom and Operation New Dawn, these 57 names show those who sacrificed their lives so that others can live. Gone, but never forgotten,” Fitzpatrick said.

“The names displayed on that wall were sailors we grew up with, stationed with and deployed with. We may not have had the opportunity to know HM3 Soviak personally, but we do know that he had the same impact as those other corps members who came before him,” added Barraza.

The Hospital Corps Heroes Wall of Honor was a project started in 2013 by two former command staff, HM1 Derrick Ward and Hospital Corpsman 2nd Class Mike Nakamura. Barraza took the necessary steps to find them and explained that it was unfortunately necessary to add another name of the dead to the memorial.

“We talked for quite a while. Their passion for the project was always there. They wanted to ensure that the integrity and intent of the memorial remained the same, to honor the fallen corpsmen. This memorial wall means a lot, not just to the hospital staff stationed here, but to all staff,” Barraza explained.

The hospital’s senior chief Randall Zenonian, acting senior command chief, took a moment to express his condolences and reflect to those gathered on the dark nature of the ceremony.

“Our Hospital Corps Heroes Wall of Honor reminds us that we stand on the shoulders of those who have gone before us, and especially those who have not returned home,” Zenonian said. “I encourage everyone to visit all of our memorials, all of which are located on the third floor of the main hospital. We also honor members of the Hospital Corps who have been awarded the Medal of Honor, the Navy Cross, as well as those whose status is listed as POW or missing in action. Gone, but never forgotten.”

The ceremony ended with a minute of silence in honor of Soviak and the 12 others who died on that fateful day.