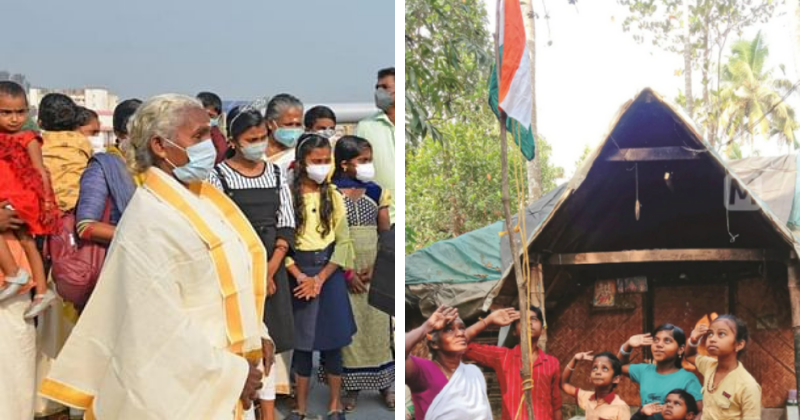 Last month, an elderly woman from Thrissur, Kerala went viral on Republic Day for raising the national flag in the presence of her grandchildren outside her small hut on Republic Day. Today Ammini Amma, 69, was honored by the Indian Navy on Wednesday.

Ammini Amma, along with seven students from CNN High School, Cherpu, Thrissur, and their tutors and teachers, were taken on a surprise visit after reaching the Southern Naval Command headquarters in Kochi. The group was specially invited to the event.

A video of Vellunnaparambil Vijayan’s mother, from Cheruchenam, Ammini Amma hoisting the flag and her grandchildren waving to him outside her small hut had gone viral on social media. CNN Boys High School principal AR Praveen Kumar had urged students to raise the flag to honor the day, and their teacher had encouraged them to capture a video of the moment. Mr. Kumar originally posted the video on Facebook.

Vijayan, a coolie worker, had built his house five years ago with palm fronds and coconut leaves.

The now-viral video was shot on mobile by Ammini Amma’s granddaughter and eldest granddaughter, Vismaya, a student over 2 years old.

Ammini Amma’s grandchildren seen in the video were Vivek, Vaiga, Sreelakshmi, Shivahari and Shivathmika. All are students of the CNN high school in Cherpu. The school principal, Praveen Kumar, was also invited to Southern Naval Command for the tour in Kochi.

“As part of Amrit Mahotsav, the Indian Navy has decided to organize a visit to Kochi Naval Base after seeing the enthusiasm of the children in the video that has gone viral on social media,” a navy statement read. .

Guests were presented with Navy gifts and souvenirs by the Commandant and staff of INS Magar and INS Dronacharya. Staff and families from INS Dronacharya, members of the Naval Wives Welfare Association as well as teachers from Naval KG joined guests for a traditional ‘Sadya’ for lunch at the event.