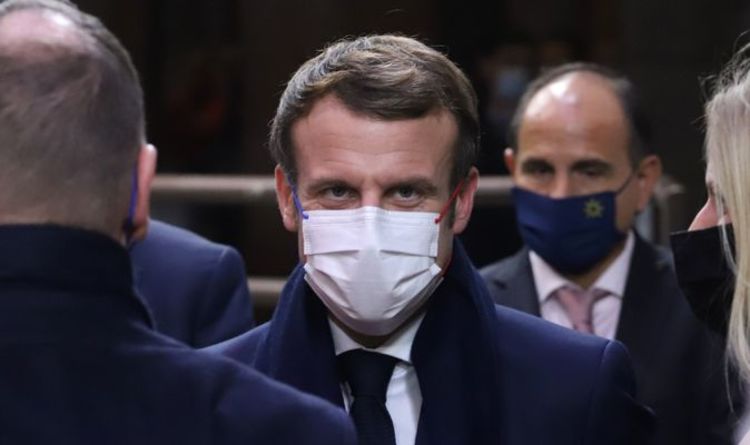 It comes as the French president forges ahead with the tour of France during the six-month rotating presidency of the European Council this year. However, an Ifop-EuropaNova poll published on Christmas Day showed that nearly six in ten respondents in France wanted their membership of the European Union ended.

Out of more than 1,000 people questioned, four in ten called for greater French sovereignty within a bloc of united nations.

Less than three in ten would praise a more integrated bloc.

The news drew condemnation from readers of Express.co.uk, who denounced the French president for being estranged from those whose interests and desires he serves as a leader.

One reader, ‘narla’, asked, “How can you have a president of a country that doesn’t even recognize his own country?”

Another, with the pseudonym Leeds12345, wrote: â€œJust a few years ago polls like this were overwhelmingly pro-EU, we talk over 80% of support for the EU.

“We are now seeing an almost complete reversal.”

Another, SanjitP, commented: â€œMacron can be ready for the full integration of France into the EU, and voluntarily renounce the tricolor.

â€œBut the French seem to have other ideas and ambitions for their nation.

Mr Macron, in a nod to the rotating French presidency, swapped a tricolor flag suspended above a war memorial at the Arc de Triomphe in Paris for a flag adorned with the EU emblem .

The move was immediately condemned by his longtime political and presidential rival, Marine Le Pen, who called on the French president to â€œwithdrawâ€ the EU flag.

Ms. Le Pen declared: â€œTo adorn the Arc de Triomphe with the colors of the European Union alone, without the presence of a national flag, is a real attack on the identity of our nation.

“This monument honors our military victories and houses the Tomb of the Unknown Soldier.”

She added that the French leader “betrayed the duties of his office and displayed arrogant contempt for our history in the name of personal ambition.”

Under the leadership of Mr. Macron, France has been one of the most invested voices of the European Union and pushed further for the integration of member states.

The young French Minister of European Affairs, ClÃ©ment Beaune, tried to dispel the controversy surrounding the posting in a post on social media.

He writes: â€œThe French flag has not been replaced.

“The election campaign is not a pass for petty lies and controversy.”

Presidential elections are fast approaching in April, soon to be followed by legislative elections in June.