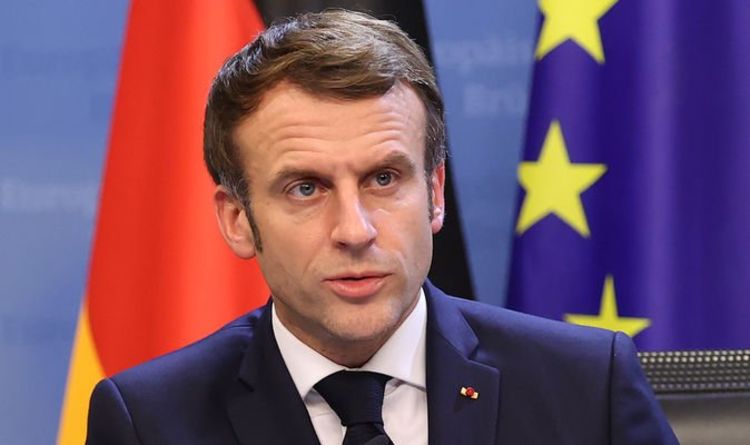 Emmanuel Macron has already left for a controversial start to the year after replacing the French flag at the Tomb of the Unknown Soldier with an EU flag. The symbolic gesture, intended to mark the start of the six-month Paris presidency of the European Union, triggered a wave of furious protests from the right. Presidential rival Marine Le Pen called on authorities to immediately “withdraw” the EU flag.

The EU’s blue flag with 12 gold stars was placed on the famous Arc de Triomphe as France took over the presidency of the Council of the European Union, one of the bloc’s decision-making bodies.

The EU symbol has also been projected onto government buildings and cultural monuments, including the Eiffel Tower, Notre Dame Cathedral and the Louvre.

Ms. Le Pen declared: â€œTo adorn the Arc de Triomphe with the colors of the European Union alone, without the presence of a national flag, is a real attack on the identity of our nation.

“This monument honors our military victories and houses the Tomb of the Unknown Soldier.”

The far-right politician accused Mr. Macron of having “betrayed the duties of his office and of having shown arrogant contempt for our history in the name of personal ambition.”

Ms Le Pen, seen as Mr Macron’s main rival in this year’s presidential elections, said the French president had given a “direct order” to hang the flag.

In a tweet on New Year’s Eve, Ms Le Pen called on President Macron to immediately hand over the French tricolor to the Arc de Triomphe.

She added that she would appeal to the State Council, which acts as legal adviser to the executive, to remove the EU flag.

He tweeted: “The French flag has not been replaced. The election campaign is not a pass for little lies and controversy.”

The French are expected to vote in the presidential elections in April, followed by the legislative elections in June.

President Macron has pledged an ambitious and sweeping agenda for France’s six-month term as EU presidency.

He proclaimed that 2022 must be a “turning point for the European Union”.