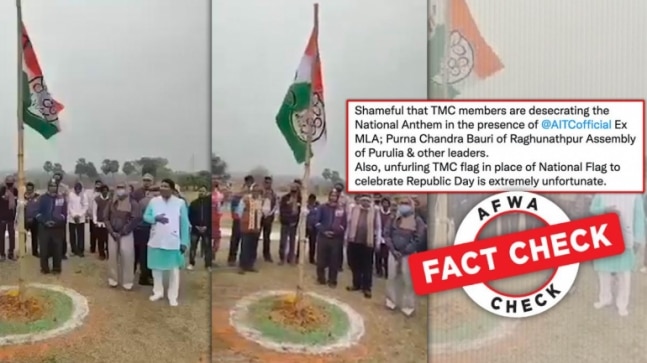 Fact check: Did this TMC leader raise the party flag in place of Tricolor on R-Day? Not really

On January 26, West Bengal BJP leader Suvendu Adhikari tweeted a video showing a Trinamool Congress leader hoisting the party flag and singing the national anthem with others in attendance around him. Adhikari claimed that this Purulia TMC leader unfurled the party flag instead of the Tricolor on Republic Day.

“Shameful that the members of the TMC desecrate the national anthem in the presence of TIAC official former MP; Purna Chandra Bauri of Raghunathpur Assembly of Purulia and other leaders. Also, unfurling the TMC flag instead of the national flag to celebrate Republic Day is extremely regrettable,” Adhikari tweeted.

India Today Anti Fake News War Room (AFWA) found that the viral video does not show the full event. On Republic Day, Bauri hoisted the TMC flag, but before that, he had also unfurled the national flag on another flagpole alongside the party flag.

Watching the video closely, we found a tricolor mark on the ground surrounding the pole where the TMC flag was hoisted. Almost at the end of the video, we noticed another tricolor circle drawn on the ground which indicates that there might be a second pole next to the TMC flag.

Taking that as a hint, we reached out to the TMC chief in question, Purna Chandra Bauri, who can be seen in the video wearing a green kurta and white coat.

Bauri immediately denied Adhikari’s claim and said he raised the national flag first and then the party flag. “You can see the truth in the other videos and photos posted on social media,” the TMC executive said.

Bauri is the former MPP for Raghunathpur constituency in Purulia district where this video was shot.

The Bengali translation of the post reads: “Today some people created controversy by twisting the truth and cropping the video. If you have the courage, post the full video.

Bauri also sent AFWA another video of the same event which shows him hoisting the national flag.

By comparing the viral video with the one sent by Bauri and the photos posted on TMC’s Facebook page, we were able to identify the same landmarks such as high voltage electricity pylons and trees in the background in all three videos and Pictures. It confirms that the three visual contents come from the same place and the same event.

According to the head of TMC, he had hoisted the flag across Joychandi Pahar in Raghunathpur on the Republic Day. This area has slightly hilly terrain, as evidenced by the small hillocks seen in the viral video. From Google Maps, we tried to geolocate the place that we can see here.

Based on this evidence, it can be argued that the viral claim of TMC leader Purna Chandra Bauri hoisting a TMC flag in place of Tricolor on Republic Day is false. The TMC leader first hoisted the national flag and then the party flag.

ClaimFormer TMC MP for Purulia district in Bengal, Purna Chandra Bauri unfurled the party flag in place of Tricolor to celebrate the Republic Day. ConclusionThis video does not show the full event. On Republic Day, Bauri hoisted the TMC flag, but before that, he had also unfurled the national flag on another flagpole alongside the party flag.

The number of crows determines the intensity of the lie.