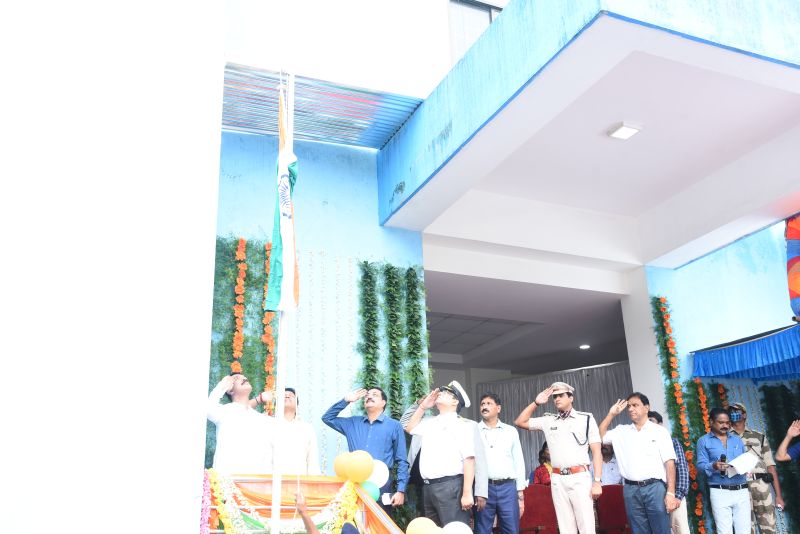 Mangaluru: In view of the ongoing celebration of 75 years of Indian Independence “Azadi Ka Amrit Mahotsav” and as directed by the Ministry of Ports, Shipping and Waterways; The flag hoisting ceremony was observed today at the Port Authority of New Mangalore. Chief guest of the celebration, Honorable Member of Dakshina Kannada District, Shri Nalin Kumar Kateel graced the occasion with his presence and hoisted the national flag in August in the presence of Member of Legislative Assembly (Mangalore North), Dr. Bharath Shetty, Dr. AV Ramana, Chairman, NMPA, Head of Vigilance Shri Padmanabhachar K (IOFS) and Port Administrators. In keeping with ceremonial tradition, the Honorable MP reviewed the parade contingent of NMPA CISF unit and Port Fire Service personnel.

Speaking on this occasion, the Honorable Member recalled the struggle and the sacrifices made by the freedom fighters for the country thanks to which the whole nation is able to celebrate Azadi Ka Amrit Mahotsav at present. He appreciated the Chairman of NMPA under whose leadership the port has undertaken various development projects, green port initiatives such as the launch of electric buses and LED street lights in the vicinity of the port, etc.

The Hon. MP for Mangalore North, Dr. Bharath Shetty in his speech recalled the greatness of India’s rich history and culture and yearned for a remarkable future for the nation.

Dr. AV Ramana, President of NMPA, revived the nation’s pre-independence history and recalled the freedom fighters who fought during the freedom struggle. He spoke about the 5 pillars of Azadi Ka Amrit Mahotsav such as struggle for freedom, ideas at 75, achievements at 75, actions at 75 & resolves at 75 and articulated the growth seen in the Nation since independence, as well as the Maritime sector of the Country. The President reminded the port workers of the service rendered by them to the nation in terms of facilitating EXIM and urged them to work harder for the good of the nation.

As the day also marks “Guru Purnima”, two principals of Kendriya Vidyalaya No.1 & NMPA Secondary School were commended for their exemplary service in the field of education. Prizes were also distributed by the dignitaries to the winners of various contests organized in connection with Azadi ka Amrit Mahotsav. This was followed by a patriotic cultural program. Heads of Departments, Senior Officials, Port employees and staff were present during the celebration.