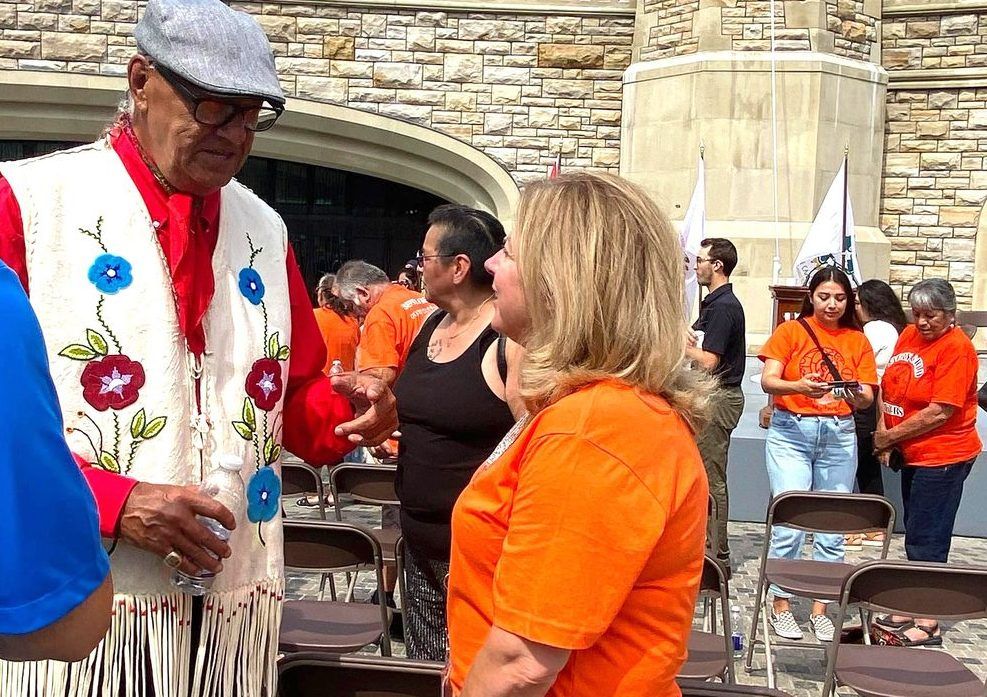 The National Center for Truth and Reconciliation Survivor Flag was raised Monday on Parliament Hill in memory of the 150,000 Indigenous children who were forcibly separated from their families and communities to attend residential schools.

The raising of the flag also honored the survivors, their families, the communities whose lives were changed forever, as well as those who never returned.

“Today is certainly an important day. Today’s ceremony was a moving honor for survivors and those who never had the opportunity to come home,” said Sudbury MPP Viviane Lapointe in a statement, “We will continue to support Indigenous communities with the resources they need to heal. Together, we will continue to advance reconciliation, honor survivors and remember those who did not return.” It is our responsibility to continue to listen and learn.

The Survivor Flag is a symbol of remembrance, honoring all the lives touched by the residential school system in Canada. The elements include a depiction of a family with seeds underneath meant to represent the spirits of children who never returned home.

The flag was first raised on Parliament Hill in September 2021 in a special ceremony marking the first National Day for Truth and Reconciliation. Now it will fly on Parliament Hill until 2024, when a decision will be made on a permanent location for the flag.

Learn about the meaning of the Survivors Flag at nctr.ca/exhibits/survivors-flag.

Prime Minister Justin Trudeau attended the ceremony and was joined by Stephanie Scott, Executive Director of the National Center for Truth and Reconciliation, Minister of Crown-Indigenous Relations Marc Miller, Minister of Northern Affairs Dan Vandal and residential school survivors from across the country.

Several residential school survivors have spoken of the significance of the flag, including Jimmy Durocher, a Métis survivor who attended St. Bruno Residential School in Ile-a-la-Crosse, Saskatchewan.

“Today, we raise the Survivor flag high over these colonial buildings, where lawmakers are now listening to our truths and seeking to work together toward reconciliation,” Durocher said.

In his remarks, Scott asked elected officials to take the time to do their jobs to pause when they see the flag.

Trudeau called residential schools a “shameful” part of Canadian history and said the survivors’ flag would help Canadians remember what happened at government-funded, church-run institutions during more than a century.

“This flag is an expression of remembrance,” Trudeau said. “It is meant to honor all survivors and all lives across generations who have been, are and will continue to be touched by the residential school system.