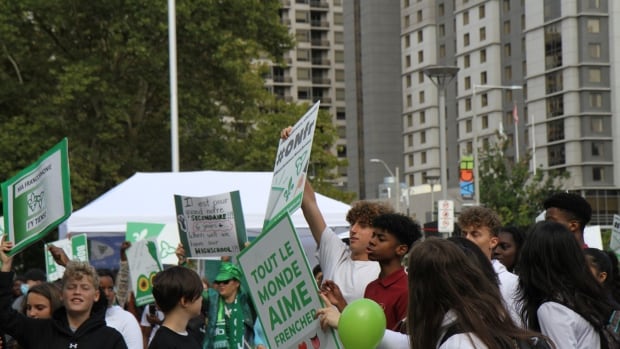 Franco-Ontarian Day celebrations kick off in Hamilton, after tensions over city permit

Rain couldn’t stop celebrations for Hamilton’s French-speaking community on Thursday, despite a mix-up with City Hall that jeopardized this year’s flag-raising ceremony.

“It’s a symbolic moment for us to commemorate those who came before us, those who fought for the right to speak French in a minority setting.”

controversy with the city

There has been some controversy surrounding the event this year due to a last-minute permit withdrawal by the city last week.

As a result, ACFO was forced to move the event to September 22. It was originally scheduled for Friday, September 23.

Norm Miller, a senior communications officer for the city, told CBC Hamilton that event organizers have not completed the reservation process.

“Because records showed that the forecourt was not booked for that day, the next event request that came through the city’s reservation system was able to secure the forecourt,” he said. declared.

Norris said that while they’re grateful the city still showed up at the event on Thursday and for their continued support, it seemed like the city wasn’t making community a priority.

“It’s an event that happens every year. It’s still on the calendar. It’s an institution now. This is the eighth release Hamilton has presented.”

The flag raising was the first of several events that will take place over the weekend.

Other events include the Saturday launch of The blue line (the blue line), a tourist trail that highlights the contributions of immigrant communities to the city. The opening will take place at Redchurch Cafe at 2 p.m., followed by a guided tour and culminating in a musical performance and picnic at Bayfront Park that evening. A gala dinner for seniors takes place on Sunday.

Thursday’s event included the presentation of the 2022 Engagement Franco Award, which recognizes the efforts and contributions of community members.

Hamilton Mayor Fred Eisenberger expressed his support for the Francophone community and for the new French-language school that the MonAvenir and Viamonde school boards hope to see built on Garner Road.

The new school would be home to a French public and Catholic school, combined. The community has been pushing for the school for some time, but, according to French-language school boards, the city government has repeatedly delayed the project, citing bylaw issues and the refusal of Ward 12 Councilor Lloyd Ferguson.

“The City of Hamilton is not meeting the needs of Francophone citizens and families in the region. The municipality shows little will to recognize the rights of citizens and families of the linguistic minority to access French-language schools,” reads a press release from MonAvenir. and Viamonde school boards from September 2021.

“After maintaining a cordial relationship with the municipality in order to move the project forward, the school boards are now obliged to publicly denounce the City’s inaction in order to see the project materialize.

Eisenberger said Thursday he recognizes the community’s desire for construction of the school to move forward and said the city is working as quickly as possible.

“We are part of the city”

His father, Kodzo Awitor, said he was very proud to be part of the community, but he may feel there is a lack of recognition for French speakers in the city.

“We’re just here to show the city our presence and… and to make sure [people] know that we are part of the city.”

As an immigrant from Togo, he said a Francophone community is not “something you find everywhere”.

“Having people you can communicate with and who understand you from the get-go is really important, especially when you’re a newcomer,” he said.

Kodzo said the city should continue to support the community.

“Sometimes we feel like we’ve been left behind, so it’s good the mayor was there, the MPs were there to show their support and help the town grow.”

Norris also shared his appreciation for the community.

“I am here [now]a francophile, organizing a flag-raising day for a community that I wouldn’t even have been able to be a part of if I hadn’t stood on the shoulders of people who have shown significant leadership in this community before. »