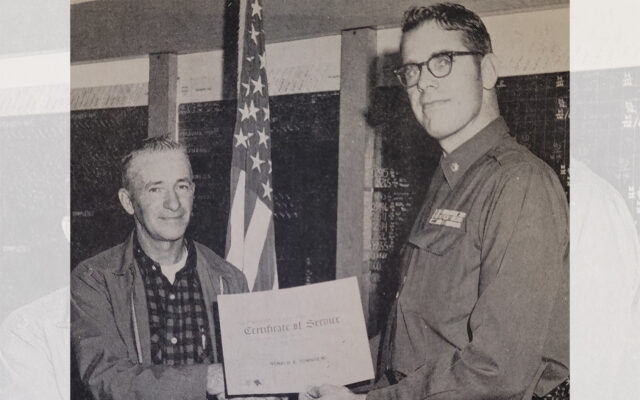 From our files – County

75 Years Ago – Nov 14, 1946 Pharmacist group chooses new leader – Ted Thompson of Presque Isle was elected president of the Aroostook County Pharmacists Association as the group met in annual session at the Northland hotel.

Chester A. Doudey in Tsing Tao China – Chester A. Doudey, Seaman, USN, husband of Mrs. Mary Doudey of Presque Isle, arrived in Tsing Tao, China, aboard the destroyer USS Stickell, attached to the 7th Fleet in Asian waters. The Stickell completed an escort mission on the aircraft carrier USS Princeton when it transported the remains of the late Philippine President Quenson to his homeland from the United States. Much of the Stickell’s duties from Tsing Tao were to transport the crew members of the ship’s larger ships to Shanghai for freedom and recreation.

FEDERAL SERVICE – Ronald E. Townsend received a Certificate of Service and Service Emblem in recognition of 20 years of loyal service to the Federal Government. The presentation was made on October 29 by Lieutenant-Colonel James S. MacKenzie, Base Civil Engineer. Townsend had been employed by the public service since 1953 and had served in the military during World War II. Townsend, who resided at Mars Hill, was a chief carpenter, Carpenter Shop, Loring. (File photo 1971 / The Star-Herald)

Best Honored Student – During the regular weekly Presque Isle Kiwanis Club reunion on November 9, Betty McCready of Presque Isle High School was honored for being one of the state’s top 80 students as a semifinalist on the test of qualification for national scholarships. The meeting at the Northeastland Hotel also featured Rod McCormack, Director of the Work Opportunity Center. Lew Pepin reported on the progress of the annual talent review. Lewis Libby introduced Robert Carter as his guest.

In the top 10 – Donald Johnston, buyer for the local branch of Milliken-Tomlinson Company, was selected seventh in the top 10 buyers in the Vermont, Maine and New Hampshire region. It was selected by food vendors across the region in response to a Griffin Report poll. Chamber of Commerce President Irwin Porter congratulated Johnston on his award and congratulated him on the honor.

Two Girl Scouts have been recognized – Girl Scout Troop 111 held their weekly meeting at the Baptist Church on November 9. The reunion began with a Flag Ceremony, an Oath of Allegiance to the American Flag and the Girl Scout Pledge. An awards court was held in which Vickie Scott and Nancy Humphrey received first class badges and pins. They were the first to receive this award since the Girl Scout organization started here about five and a half years ago. The presentation was made by the Deputy Troop Leader, Ms. Carol Jordan. Mrs. Mary Humphrey and Mrs. Cecile Scott attached pins and badges to their daughters’ uniforms. Their fathers, Wilburn Scott and Keith Humphrey, attend the ceremony.

TAMC joined Rotary for a fundraiser – The Aroostook Medical Center (TAMC) has suspended its annual fundraising campaign for 1997 as a separate activity and encouraged participation in the Presque Isle Rotary Club’s special project to raise $ 125,000 for the County Dialysis Center. , which was being created as a new TAMC service in cooperation with Eastern Maine Medical Center.