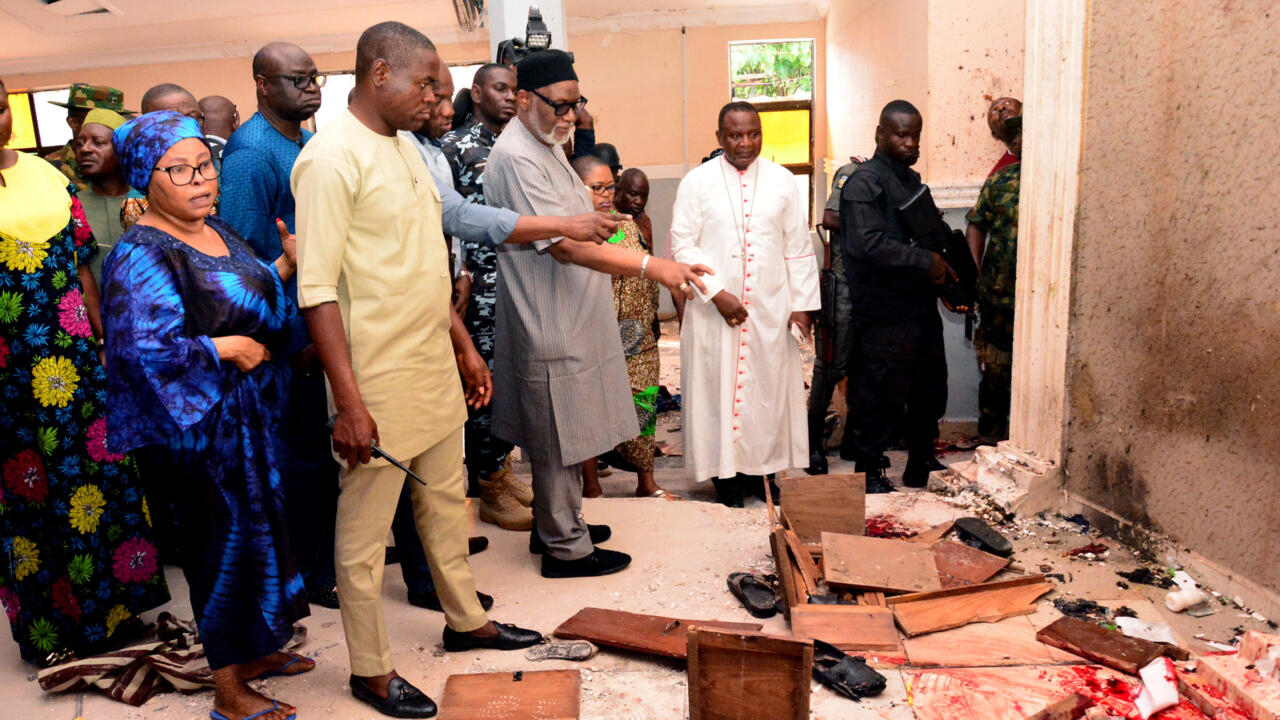 Lagos (AFP) – Gunmen killed at least 21 people, including children, in an attack on a Catholic church in southwestern Nigeria on Sunday, local officials said, in violence that drew widespread international condemnation.

The bloodshed at St. Francis Catholic Church in the town of Owo during a service was a rare assault in Nigeria’s usually safer south-west and shocked a country accustomed to jihadist attacks and mass kidnappings in the north.

Richard Olatunde, spokesman for the governor’s office in Ondo state, told AFP that dynamite had exploded inside the church before gunmen opened fire on them. faithful attending the service.

Bloodstains still marred the floor of St. Francis Church and debris was strewn a day after the attack.

“They didn’t even enter the church, they were shooting through the windows,” Olatunde said, confirming a death toll of 21.

The local representative of the National Emergency Management Agency, Olanrewaju Kadiri, said 22 people had been killed, including several children, and 40 others injured.

Vice President Yemi Osinbajo arrived Monday to visit some of the injured.

“I ran to the church and saw my two children and we brought them here to the federal medical center,” said Nzeadu Paulinus, a resident who was absent from the church when the shooting started. and whose two children were injured.

“I saw so many people who were injured and dead.”

The state government declared a seven-day mourning period for the victims and ordered the national flag to be flown at half-mast in Ondo.

No group has so far claimed responsibility for the attack and the motives were unclear.

A witness told AFP that he saw at least five armed men inside the church.

“I was passing through the neighborhood when I heard a loud explosion and gunshots inside the church,” the witness, who was called Abayomi, told AFP.

The Nigerian military is fighting a 12-year-old jihadist insurgency in the northeast and heavily armed criminal gangs often carry out mass looting and kidnappings in the northwest and north-central part of the country.

But large-scale attacks in southwestern Nigeria are relatively rare, although kidnappings for ransom have become increasingly common.

The UN special representative for West Africa and the Sahel, Mahamat Saleh Annadif, condemned what he called a “barbaric terrorist attack”.

The attack came a day before the ruling APC party begins primaries for its candidate in the 2023 elections to replace Buhari, a former army commander who is stepping down after two terms.

Security will be a major challenge for whoever wins the race to govern Africa’s most populous country and the continent’s largest economy.

Apart from jihadists and criminal gangs known locally as bandits, Nigeria’s security forces are also grappling with separatist unrest in the southeast.