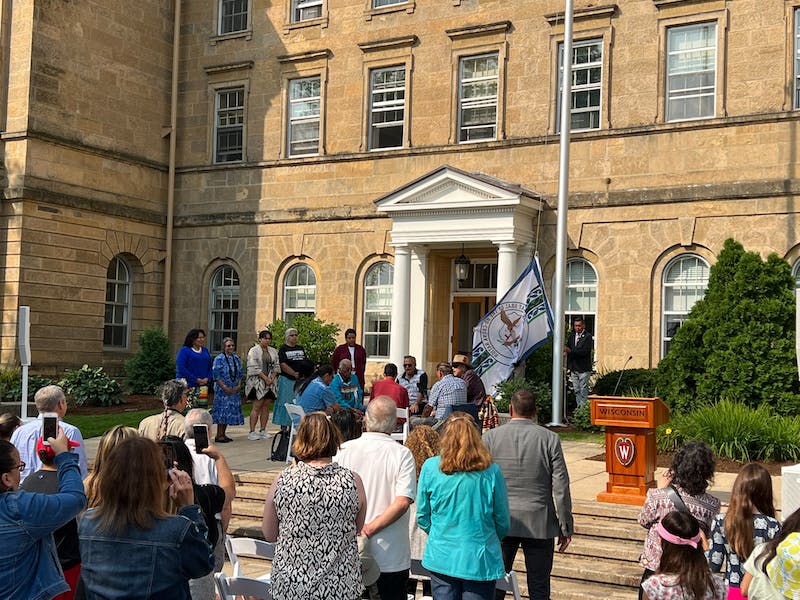 Ho-Chunk Nation President Marlon WhiteEagle raised the issue flag of the Ho-Chunk nation early Thursday morning for the second time in University of Wisconsin-Madison history. The flag will fly for a total of six weeks above Bascom Hill on scheduled intermittent periods.

“These efforts here are very thoughtful and very inclusive not only for the Ho-Chunk people, but it’s a real opportunity to learn more about the people who lived here,” WhiteEagle said. said at the ceremony.

In addition to standing for a week in September, the flag will be raised on Indigenous Peoples Day and throughout November, which is National Native American Heritage Month.

“The flag is a symbol of something much bigger,” Ho-Chunk public relations manager Casey Brown told the Cardinal. “It may look like just a flag and a piece of fabric, but what it means to us to fly it over Bascom Hill is incredibly meaningful.”

This year’s Flag Ceremony is also another milestone in UW-Madison’s execution of the “Our common futureThis initiative was a process planned by the university in 2019 to foster the act of moving together to eliminate ignorance and embrace educational awareness about the history of the Ho-Chunk Nation and others Wisconsin First Nations.

“I am deeply honored to reaffirm UW-Madison’s commitments to strengthening the relationship between the university and the Ho-Chunk Nation and to recognize that the university is built on the ancestral lands of the Ho-Chunk people,” said said Chancellor Mnookin at Thursday’s event.

UW-Madison inhabits the ancestral homeland of the Ho-Chunk Nation. The UW-Madison campus is famous for being home to many Nation Cemeterieswhich can be found scattered around Lakeshore Road.

“I’ve learned that UW-Madison hasn’t always acknowledged how its history connects to Indigenous nations, but I also know that we’re working to change that and to tell larger, fuller, and more honest stories of this place,” Mnookin continued.

UW-Madison Tribal Relations Director Aaron Bird Bear also told the Cardinal that it would be helpful if the university “examines in depth how it can interrupt and stop the settler colonialism that remains an ongoing process in the United States.” United”.

“If every student who attended UW-Madison were (a) aware of all of the human history of this place, (b) what made it such an important cultural site for thousands of years, (c) the native language place names for the lakes, rivers, villages and regions of what is now known as Madison, WI, and (d) was finally aware of the history of the Ho-Chunk people, this would fill the UW-Madison mission statement,” He continued.

Looking ahead, Mnookin indicated in his speech that UW-Madison will do a better job of implementing education about Wisconsin’s Indigenous Nations in the curriculum, as well as trying to make it a priority to enroll more aboriginal students at university.

“What we have said about the future is that we expect the Ho-Chunk Nation flag to fly on campus,” University Communications Specialist Doug Erickson told the Cardinal.

Enjoy what you read? Get content from The Daily Cardinal delivered to your inbox

Ultimately, Brown would also like to see the university permanently fly the Ho-Chunk Nation flag atop Bascom Hill.

“Because UW-Madison is a public university, part of a larger university system change can be very difficult to achieve, especially quickly,” he said. “There is a lot of bureaucracy. It takes baby steps. It is certainly a good start. We really appreciate how open the administration and staff at UW have been with us and achieved this end goal.

The Daily Cardinal has covered the University and community of Madison since 1892. Please consider donating today.