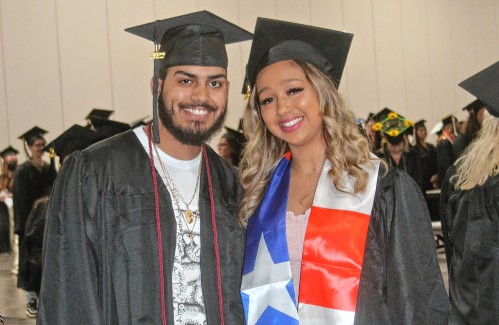 SPRINGFIELD — Standing backstage at the 75th start of the MassMutual Center for Holyoke Community College, minutes before gathering in procession in the 8,000-square-foot arena, the 665 future graduates brushed their hair, posed for selfies and posed. took deep breaths to compose himself.

A graduate took the time to commemorate the occasion with a TikTok.

After explaining to a new friend how to use the social media platform, Edil Ramsahai, 51, handed over his mobile phone and began flickering left to right in his ceremonial robe and mortarboard, blowing kisses and extending his hands in a thumbs-up motion.

“It’s for my family,” the beaming man from Holyoke said on Saturday, June 4. “They are all over the world.”

A native of Puerto Rico, Ramsahai graduated with honors from college and an associate’s degree in liberal arts. He exuded pride as he described his future plans to go to another college and one day become a counselor.

“I want to help people in my community, help people struggling with drug use, and help kids stay straight in school. We can’t just let people suffer on the streets,” he said. “I love my country and my community and I want to make a difference here.”

In celebrating their accomplishments, HCC President Christina Royal highlighted some of the nation’s major events in recent years, from the California wildfires and the death of George Floyd to Vice President Kamala Harris becoming the first woman , the first black American and the first Asian American. never occupy the office. Royal also highlighted some of the college’s developments, including holding its first Pride flag-raising event and Trans flag-raising ceremony, becoming the first community college to accept SNAP benefits in its home market, and becoming the first college in Western Massachusetts to develop a child supervision program to support student-parents.

“Our world has been affected on so many levels, personally, culturally, spiritually and academically,” she said. “And in the middle of it all, you made the decision to go to college. You persevered in the most unpredictable of circumstances and decided to move forward. While there may have been the greatest turmoil we have ever seen in our country and in our world, you have something very certain. A university degree.

Carolyn Sicbaldi of Holyoke is a particularly proud graduate of overcoming obstacles in her life. Sicbaldi, who said he barely graduated from high school, graduated Saturday with first class honors and an associate’s degree in biology. Originally from Hampden, she was also a member of the Student Senate and the STEM club.

At the start, Sicbaldi also served as a student speaker, presenting the class gift of a flowering dogwood tree, as well as a stone plaque honoring the class of 2022 as well as the graduates of 2021 and 2020.

This fall, she plans to continue her studies at Smith College where she will focus on environmental science and policy. From there, she hopes to land a career that allows her to contribute to the fight against climate change.

“I didn’t have a great experience in high school…and ‘I didn’t apply myself’ as my mother always said. And I applied myself, finally. It took 10 years, but here I am. …I finally realized what my priorities were and what I valued. I wanted to make a change and prove to myself that I could actually do it,” she said.

I was able to persevere not only through the stigma of returning to college after 10 years, but also through a pandemic. I went through a breakup and had to move… It was one ordeal after another, and as nervous as I am today, it’s just another one of those ordeals. That’s another hurdle that I’m going to jump over and say, ‘I did that one too.’

Editor Emily Thurlow can be reached at [email protected]