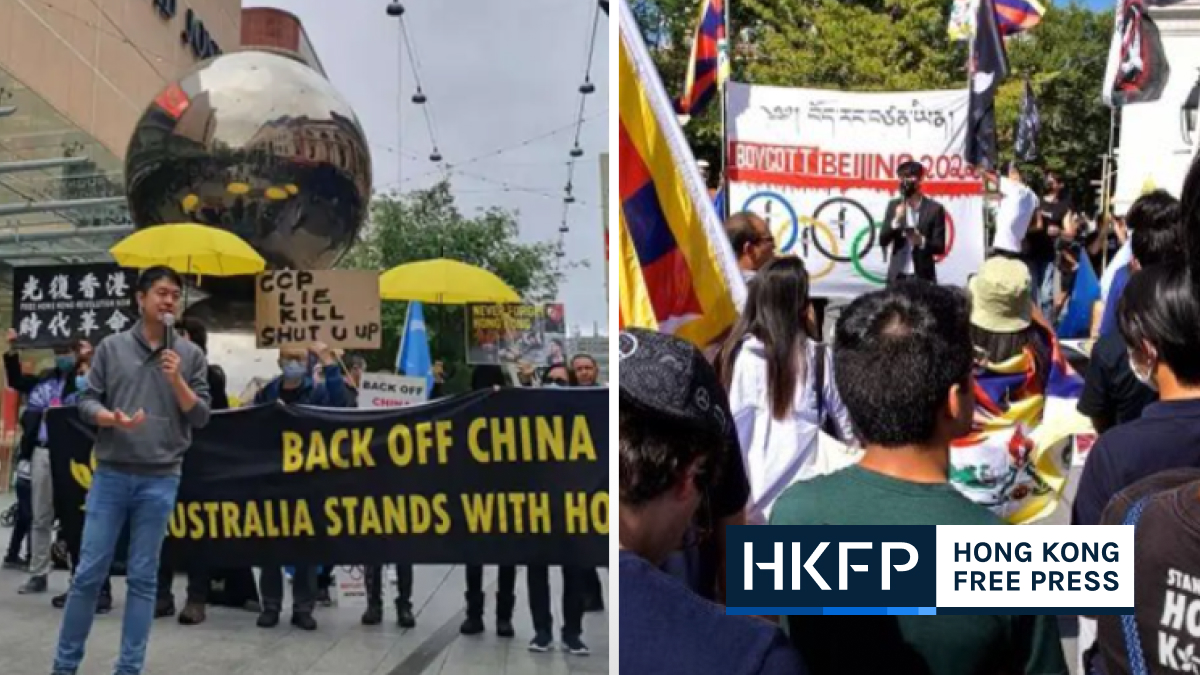 Self-exiled Hong Kong pro-democracy figures and foreign activist groups held independence banners and set Chinese flags on fire as they staged protests around the world in the occasion of the 72nd anniversary of the founding of the People’s Republic of China.

Hong Kong people in Taiwan, Britain, the United States and Australia staged protests and rallies on October 1, when China celebrated its founding in 1949. They accused Chinese authorities of violating human rights in Hong Kong and Xinjiang and called for “resistance” against what they saw as the oppression of the Chinese Communist Party (CCP).

In Taiwan, a number of pro-democracy groups held a rally in Taipei on Friday evening on the theme of “resisting China” and “teaming up for human rights.” Among the organizers were the Hong Kong Outlanders, founded by Hong Kongers based in the island nation.

Flags bearing the slogan “Free Hong Kong, Revolution of Our Time” were seen at the scene. The eight-word mantra is banned in Hong Kong after the government says it has pro-independence overtones, while the city’s High Court in July said it was able to mean separating Hong Kong of China.

Some participants also brought Hong Kong independence flags and the snow lion flag, a symbol of the Tibetan independence movement.

The groups urged the Taiwanese to block what they saw as an infiltration of Chinese capital and boycott the 2022 Winter Olympics in Beijing. They also called on the Taiwanese Legislative Yuan to review the law governing relations with Hong Kong Macao, as well as pass a bill requiring the Executive Yuan to prepare an annual report on the human rights situation in Hong Kong.

â€œIn democratic Taiwan, we can do whatever we want freely, say whatever we want to say,â€ the Hong Kong Outlanders wrote on Facebook. â€œWe want the world to know that, even under China’s severe oppression, we still persistently and unitedly resist China’s power and uphold human rights and democratic values.

Participants were seen presenting a portrait of Chinese leader Xi Jinping upside down, then drawing a cross and name-calling in the photo. They also knocked down the Chinese national flag. Taipei city councilors Lin Ying-meng, Sabrina Lim and Meredith Huang attended the rally on Jinan Road.

Crowds gathered at Piccadilly Circus in London on Friday in solidarity with the campaign for democracy for Hong Kongers, Uyghurs and Tibetans. Some participants wore yellow face masks and held yellow umbrellas, a color affiliated with Hong Kong’s democratic movements in 2014 and 2019.

Similar to other overseas gatherings, the “Liberate Hong Kong” flags were seen fluttering in the wind, along with the British colonial flags of Hong Kong and the Tibetan flag. China’s national flag was destroyed by flames, while a shot to the head of Xi – with a huge “X” on his face – was also set on fire.

Wear my #uyghur doppa and #Fight for freedom #StandWithHongKong T-shirt, speaking to the crowd then to the media, then walking with others from Piccadilly Circus to the #CCP embassy, â€‹â€‹to deliver our message:#FreeHongKong#FreeUyghurs#Tibet free#FreeChina pic.twitter.com/d1kZCBWy5S

Prominent activist and ex-lawmaker Nathan Law, who attended the rally shortly after returning from New York, said October 1 was a “symbolic date” for Hong Kong people abroad to gather and congregate. recall to “fight against the violation of democracy and freedom by China”.

He said that Hong Kong people should strive to develop a sense of identity and cohesion, after moving abroad: â€œMaintaining the local culture of Hong Kong is very importantâ€¦ we must leave the second and third generations of [Hong Kong immigrants] learn about the history of Cantonese and Hong Kong resistance.

Hong Kong self-exiled activist Baggio Leung, who fled the city to seek asylum in the United States, took part in a protest outside the Chinese embassy in Washington DC on Friday. The former leader of the localist group Youngspiration, now a member of the Hong Kong Liberation Coalition supporting Hong Kong people living in exile in the United States, set the Chinese national flag and the CCP flag on fire to express his opposition.

The coalition described October 1 as a “day of mourning” for Hong Kong people, citing the Lamma Island ferry collision in 2012 that killed 39 people and a protester of a high school student who was injured by a policeman during the national day demonstration in 2019.

“Perhaps the political environment in Hong Kong will make it more and more difficult to organize protest activities, but other Hong Kong people must continue to convey the truth, until the day our revolution is successful,” wrote the coalition on Facebook.

Similar scenes of burning flags were seen in San Francisco, when a group of Hong Kongers demonstrated outside the Chinese embassy in the Californian city. They also set a portrait of Chinese leader Xi on fire, Stand News reported.

In Australia, fugitive Hong Kong activist Ted Hui attended rallies organized by Hong Kong people in Adelaide to protest what they saw as the suppression of human rights by the Chinese Communist Party.

One of the protests took place in front of Adelaide Central Plaza, where protesters brought yellow umbrellas and held up a banner that read â€œBack China. Australia is alongside Hong Kong. They also mobilized against alleged human rights violations against Uyghurs.

Hui called on Australians to “interrogate” those who celebrate the Chinese National Day and ask why they were not “ashamed” of measures taken by China to “trample” on human rights. “

â€œAs long as there are political prisoners in Hong Kong who are sentenced for their speech and the Uyghurs continue to face genocide, October 1 will only be a day for us to complain about the Chinese Communist Party. ”

The former lawmakers fled Hong Kong last December while on bail, and eventually settled in the state capital of South Australia in March to live in exile. The former Democratic Party member was facing multiple criminal cases in Hong Kong, some related to the 2019 protests.

In June 2020, Beijing inserted national security legislation directly into Hong Kong’s mini-constitution – bypassing the local legislature – after a year of pro-democracy protests and unrest. It criminalizes subversion, secession, collusion with foreign forces, and terrorist acts, which have been broadly defined to include disruption of transportation and other infrastructure. The move gave the police considerable new powers, alarming Democrats, civil society groups and business partners, as these laws have been widely used to silence and punish dissidents in China. However, authorities claim that this restored stability and peace to the city.