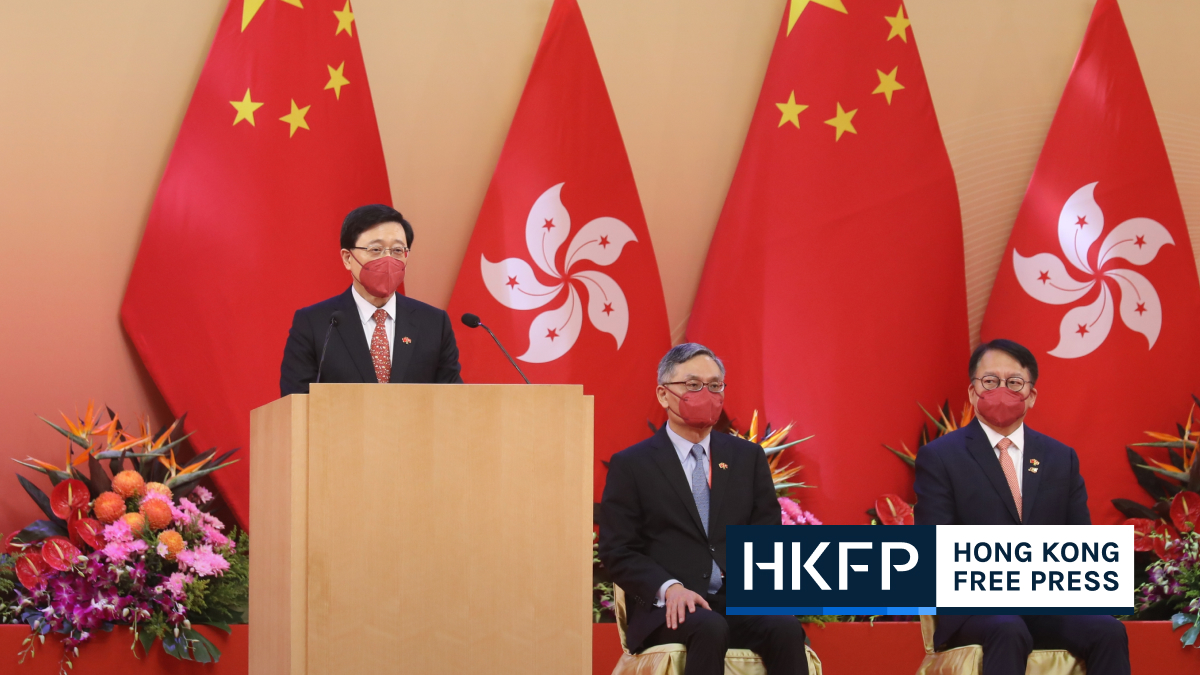 Hong Kong kicked off celebrations for the 73rd anniversary of the People’s Republic of China on Saturday morning as police deployed three special forces, including the counter-terrorism unit, and armored riot vehicles to guard the official flag-raising ceremony and the reception.

Lee, who took office in July, was flanked by former chief executive Leung Chun-ying to his right. Lee’s predecessor, Carrie Lam, was separated from the current leader by five people, including Chief Justice Andrew Cheung and former Hong Kong leader Donald Tsang. Tung Chee-hwa, 85, who served as the city’s first chief executive, was absent from the ceremony for the second consecutive year. Traditionally, the ceremony is attended by all former rulers of Hong Kong.

The police marched in a Chinese-style goose step, while helicopters flew over Golden Bauhinia Square displaying the national and Hong Kong flags during the ceremony. Four ships also sailed into Victoria Harbor to mark the occasion.

No public screening took place due to Covid-19 concerns as police cordoned off the area and put in place special traffic arrangements. About 7,000 to 8,000 officers were stationed across the city, local media reported earlier this week citing sources. Responding to an earlier inquiry by the HKFP, police did not say how many officers would be deployed on Saturday.

At a reception held at the Hong Kong Convention and Exhibition Center shortly after the flag-raising ceremony, Lee hailed China as “reaching a new milestone” this year with its economic and technological achievements. He pointed to the country’s manned space engineering, saying Hong Kong people, as Chinese, were “very proud”.

The chief executive referred to Chinese leader Xi Jinping’s speech on July 1 when Hong Kong celebrated 25 years of its return to Chinese rule. Lee said the expectations outlined by Xi would be the blueprint for him and his administration to govern the city.

Work on preparations for his first policy speech, to be announced on Oct. 19, has entered the final stage, he added. And while there were challenges ahead, Lee said he and his team would not forget their “original intention” to “seek happiness” for residents and “seek development” for Hong Kong.

“[L]We wish our country continued success and dynamism, and wish the Pearl of the Orient continued brilliance and contribution to the realization of national rejuvenation,” he said.

The reception’s emcees reminded guests to keep their masks on, practice social distancing and refrain from eating and drinking onsite in light of the pandemic. Lee greeted other guests in the room with fist bumps as the crowd surrounded him and his wife Janet for photos and selfies.

In social media posts on Friday evening, police said officers from the Counter Terrorism Response Unit, Airport Security Unit and Rail Response Team would carry out a “high-level patrol” near Golden Bauhinia Square and the Hong Kong Convention and Exhibition Center, where the flag-raising ceremony and a National Day celebration reception were held.

The Force said its new “saber-toothed tiger” armored riot vehicle – made in mainland China and fielded in the city in June – would also be deployed in the area where the celebrations would be held. The Force released images of at least one armored vehicle, but did not reveal the number of vehicles parked on the ground.

According to the post, small-scale crowd control vehicles such as water cannons were also on standby to provide security for the ceremony to take place.

Before the Covid-19 pandemic and the enactment of the National Security Law in 2020, Hong Kong often saw rallies and protests on October 1. However, this year’s celebrations have so far been free of protests, as the League of Social Democrats (LSD), one of the city’s last active pro-democracy groups, said it had no no plans to hold any activities on National Day.

LSD told HKFP on Wednesday that they had been contacted by the police’s national security department, who asked them about their plans for the “sensitive date.”

The protest group had held demonstrations on October 1 in previous years. Last year they briefly marched with a banner calling for the release of people they described as political prisoners, including 47 well-known Hong Kong politicians and activists facing a subversion charge.