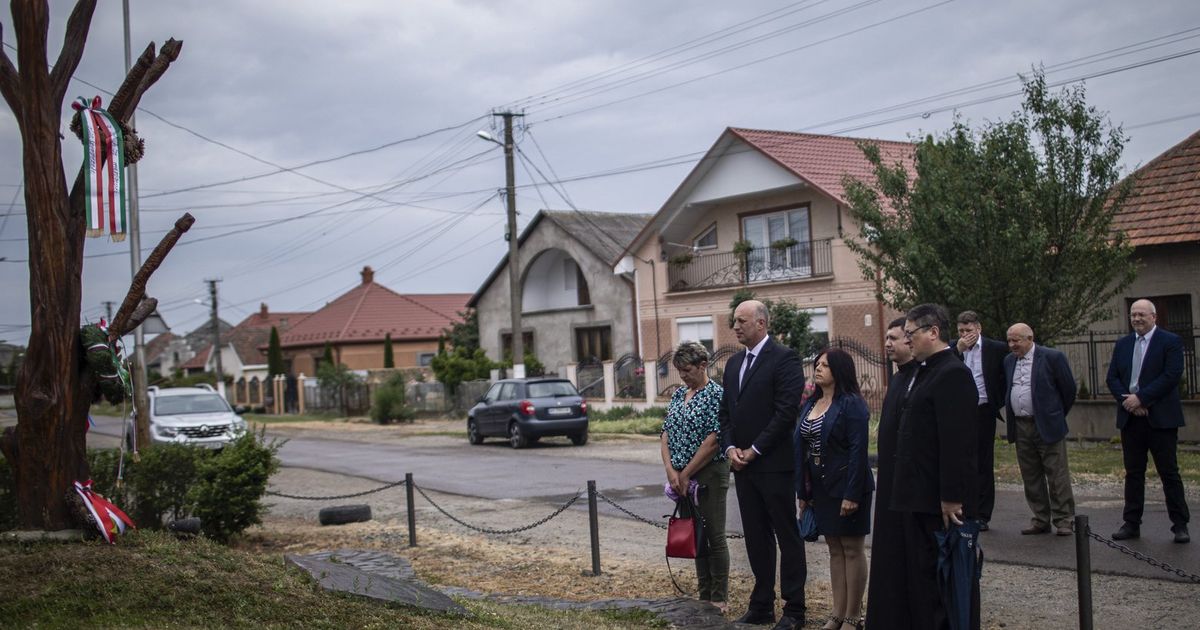 In Ukraine, a minority group is ambivalent about the war

TRANSCARPATHIA, Ukraine — Under dark clouds triggering summer rain, officials from a border village in southwestern Ukraine gathered in silence, slowly hanging wreaths from branches to commemorate the destruction of a nation.

The crowns were not decorated with the yellow and blue of the Ukrainian flag; they were laced, instead, with the red, white and green of Hungary. And the nation they honored this month was not their beleaguered country, but a homeland in their collective history, torn apart more than 100 years ago.

Transcarpathia – now a harsh region of Ukraine bordering Hungary – was home to up to 150,000 ethnic Hungarians who, through the complex horse trade, conquests and border adjustments of more than a century of European geopolitics, found themselves within the borders of Ukraine.

Before the war with Russia, the aspirations of Ukraine’s Hungarian minority were mostly seen as benign nostalgia for a time when they lived in a nation with other ethnic Hungarians. Now, the divided loyalties within the small community – which has absorbed Hungary’s ambivalence towards the Russian invasion – are seen as something more worrying by their fellow Ukrainians, some of whom fear they are susceptible to propaganda. pro-Russian Hungary.

The ambivalence felt by some is reminiscent of the troubles that Hungary’s authoritarian leader, Viktor Orban, is able to cause his neighbors, in this case by playing on the feelings of discrimination of ethnic Hungarians by their government. And that adds another layer of complexity for Ukraine’s leaders as they try to keep their sprawling, multi-ethnic country together in the face of a brutal Russian invasion, even as they struggle to win the allegiance of minorities, including Russians and ethnic Hungarians.

“It’s like being on a football pitch between two opposing teams,” said David Arpad, a pastor who led one of the commemorations of Hungary’s lost homeland, which have been scaled back to avoid stoking more tension during the war. “We are stuck in the middle of the field, because on one side Hungary and on the other Ukraine.”

Hungary and Ukraine have not always been rivals. In the last days of the Soviet Union, they were partners in nationalist struggles for greater self-determination. Hungary was among the first countries to recognize Ukraine, in exchange for ethnic Hungarians within Ukraine’s borders having the right to preserve their language and culture.

But in recent years, tensions have risen as Orban increasingly seeks to bring ethnic Hungarian enclaves in Ukraine and elsewhere under his control. Among other things, he encouraged Hungarians beyond the country’s borders to claim citizenship, which enabled him to win new voters to keep him in power.

In this impoverished region of Ukraine, along the Hungarian border, he distributed funds to run schools, churches, businesses and newspapers, earning gratitude and helping resentments from fans. The Lost Homeland Ceremony did not exist before Orban came to power.

The sense of otherness intensified when Ukraine, under constant threat from Russia, passed a law requiring more lessons to be taught in Ukrainian in public schools. The law was primarily intended to curb the use of the Russian language, but for the conservative Hungarian community where many still learn and pray almost exclusively in Hungarian, the law was seen as an unjust violation of constitutional rights.

Among the villages dotting the verdant plains beneath the Carpathian Mountains, life has long been a mix of Hungarian and Ukrainian influences. Even the time of day is uncertain. For locals, there are always two choices to schedule a meeting: Kyiv time or Budapest time.

During the war, kinship with Hungary contributed to differences over who was at fault. Despite his country’s membership of the European Union, which has sided firmly with Ukraine, Orban – President Vladimir Putin’s closest ally in the bloc – dithered, condemning the invasion but trying to avoid upsetting Putin. He tried to block EU sanctions on Russian energy imports, which Hungary relies on. And he refused to give arms to Ukraine, or even allow them to be shipped across Hungary’s borders.

This mistrust seeped into the ethnic Hungarian community, fueled by Hungarian television stations close to Orban’s ruling party which broadcast to Hungarian-Ukrainian homes along the border. Hungarian broadcasters questioned Ukraine’s position that Russia invaded to steal Ukrainian land, instead sharing Moscow’s view that it invaded to protect Russian speakers – a minority with a language different, a bit like ethnic Hungarians.

“I think that’s the main reason for the war, not what Ukraine says,” said Gyula Fodor, vice-rector of the Hungarian Transcarpathian Institute, chatting over a traditional plum schnapps after the Lost Homeland Ceremony. The institute, a private college, received Hungarian funding and Orban attended the inauguration.

As the war drags on, relations between Orban and Ukrainian President Volodymyr Zelenskyy have grown increasingly frosty.

In the border towns, mistrust is in the air. Some ethnic Ukrainians have claimed in interviews that in the early days of the Russian invasion, Hungarian priests urged worshipers to hold out hope that their region would be annexed to Hungary after the fall of Kyiv, the capital of Ukraine, although there is no supporting documentary evidence. these assertions.

In towns with an ethnic Hungarian majority, some people reported being harassed with mysterious text messages in Ukrainian: “Ukraine for Ukrainians. Glory to the nation! Death to the enemies! They said the messages ended with a threat using another word for ethnic Hungarians: “Magyars with knives”.

Ukrainian intelligence officials publicly claim the texts come from a bot farm in Odessa using Russian software and called them a Russian attempt to destabilize Ukraine, but they have provided no evidence.

Tensions in Transcarpathia erupted publicly after Moscow annexed Crimea in 2014. Right-wing nationalists have marched through the streets of Uzhhorod in recent years, sometimes chanting “Magyars to the knife”.

And a Hungarian cultural center in the town of Uzhhorod was burned down twice in 2017. In both cases, authorities said the perpetrators had pro-Russian ties. Dmytro Tuzhankskyi, director of the Institute for Central European Strategy in Uzhhorod which promotes Ukraine’s alignment with the West, says he believes Moscow was behind other local provocations. Moscow would like to sow discord between Hungary and Ukraine, he claimed, in order to cause more problems for the Western alliance that has aligned itself against Putin.

Hungarian and local officials, he worried, might unwittingly fall prey to such designs: “They might think: One more little provocation means nothing. It is a very dangerous state of mind.

For many ethnic Hungarians, Ukraine is not without blame.

László Zubánics, head of the Hungarian Democratic Union of Ukraine, said residents watch Hungarian TV partly because no Ukrainian cable channels reach border areas, which he sees as a form of political neglect . But he acknowledged that ethnic Hungarians often choose to tune into Hungarian rather than Ukrainian satellite channels.

Many ethnic Hungarians say they can only afford to stay in the region of vineyards and family farms because of Hungarian funding. This makes many ethnic Hungarians skeptical of Ukraine’s claims that it wants to help integrate them into society, Zubánics said: “Most children and parents say, ‘Why do I need the language official? I don’t see my place here in this country.’ »

Although the Soviets suppressed and exiled Hungarian nationalists, some ethnic Hungarians also began to view Soviet rule as a time of relative cultural freedom. It was a time, according to Zubánics, when Hungarians remembered holding important official positions, unlike in modern Ukraine.

Nostalgia for the Soviet era stokes the ire of local right-wing nationalists such as Vasyl Vovkunovich, once a political ally of Hungarian nationalists in the dying days of the Soviet Union. In 2017, he said he led a march of supporters through the streets of Berehove, tearing down Hungarian flags raised on many churches and buildings.

“These Hungarians are not worthy,” he said. “Their ancestors would be turning in their graves if they knew Hungary was on Russia’s side.”

For residents like Zoltan Kazmér, 32, the present seems more complicated. He feels loyal to Ukraine, he said. But it was Hungarian funding that allowed him to turn his family’s century-old winemaking tradition into a business.

This story originally appeared on nytimes.com. Read it here.