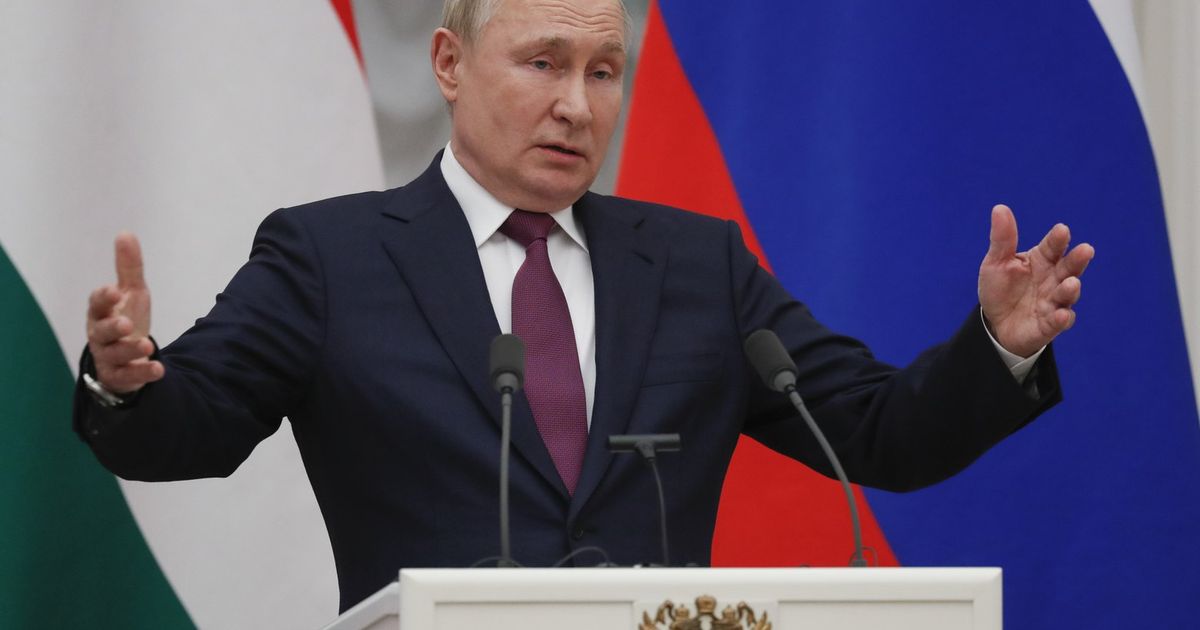 Is Biden’s strategy with Putin working or provoking Moscow to war?

By Paul V. MaganaFebruary 3, 2022No Comments

WASHINGTON — At key times since the Ukraine crisis first hit the headlines two months ago, President Joe Biden and his aides have worked to expose Russian President Vladimir Putin’s plans, declassifying intelligence on his next steps and calling him an “aggressor”.

The administration revealed information that could only have been obtained by penetrating, at least to some extent, Russian military and intelligence systems. The Pentagon has publicly stated that the force Putin is mustering on three of Ukraine’s borders will reach 175,000 or more before an invasion begins, a figure that cannot be discerned by looking at satellite photography.

Weeks later, he said Moscow would attempt to stage a provocation – a “false flag attack” against its own forces or allies – to create a pretext for action. Then the Pentagon encouraged the British to reveal a Russian plan to install a puppet government in the Ukrainian capital, Kiev.

Each of these revelations was part of a strategy to get ahead of the Russians in an area where Moscow has long excelled: information warfare.

But the revelations have also raised the question of whether, by trying to disrupt Moscow’s actions by revealing them in advance, the administration is discouraging Russian action or stimulating it. The administration’s goal is to cut off the Russians at every turn by exposing their plans and forcing them to think of alternative strategies. But that approach could provoke Putin at a time when US intelligence officials believe he has yet to decide whether or not to invade.

Learn more about the Russia-Ukraine situation

Democracies are generally terrible at information warfare, and US officials insist there is a difference between what they do and the dark arts Putin made famous.

Russia often makes up its stories, and its officials have no problem outright lying, as they did when Putin created a pretext to annex Crimea in 2014, sent agents to use nerve agents against the leader of Russian opposition leader Alexei Navalny and a former Russian spy in Britain. , and launched a series of cyberattacks against the United States.

The US and UK warnings, officials insist, are drawn from what they see as a credible stream of intelligence assessments and have been backed up by commercial satellite photography and Twitter posts showing a massive force gathering at the borders of Ukraine.

Understandably, officials refuse to talk about how they got the underlying information about Russia’s plans. But several of the revelations have sparked debates over whether the United States or its allies risk disclosing their sources and methods, the intelligence world’s most valuable resource.

“Regardless of how it plays out, it will be a great case study in the preemptive use of intelligence,” said Paul R. Kolbe, a former chief of the CIA’s Central Eurasia Division, who has worked in Russia when Putin got up and now leads the intelligence project at Harvard.

But already this alert strategy has triggered some unease.

Ukrainian leaders have objected to the US characterization that an invasion is “imminent” – or even likely. “They make it as sharp and searing as possible,” President Volodymyr Zelenskyy complained the other day, a point he made more clearly to Biden in a phone call last week. “In my opinion, this is a mistake.”

The source of Zelenskyy’s concern is understandable: He doesn’t want Ukrainians to panic, the stock market to crash, or foreign investors and leaders to rush to the airport. And Biden’s communications aides toned it down a bit, dropping the word “imminent” from their warnings of a Russian invasion.

“We stopped using it because I think it was sending a message that we had no intention of sending, which was that we knew President Putin had made a decision,” the secretary acknowledged. White House Press Secretary Jen Psaki during a press briefing.

But other administration officials said they thought they saw signs that Putin himself was a little taken aback by the aggressive US approach. At a press conference on Tuesday, he accused the White House of reviving the Cold War containment strategy – then said he believed the Biden administration was trying to pressure him into an attack, as an excuse to trigger Sanctions.

“In this sense, Ukraine itself is just an instrument to achieve this goal,” Putin said. “It can be done in different ways, by dragging us into some kind of armed conflict and, with the help of their allies in Europe, forcing the introduction against us of these severe sanctions that they are now talking about in the United States.

But for many in the administration, what Putin left out was more important than what he said. There was no threat that the United States and NATO would have to give in to his demands that troops leave former Soviet bloc countries that are now part of NATO and that all nuclear weapons be removed from Europe, where he will be forced into what he has done before and mysteriously called “military/technical means”. Maybe it was a temporary omission.

And Putin said the US and NATO responses, the text of which was leaked to a Spanish newspaper, did not address any of his main concerns. But he hinted there was still time for diplomacy, taking a very different tone from his request a few weeks ago that he needed ‘written guarantees’ and that he needed them immediately. . Some who have jousted with Putin for years have seen a man looking for a way out.

William Taylor, a longtime diplomat who served as U.S. ambassador to Ukraine, said Wednesday he thinks Biden’s more aggressive posturing — a shift he calls “from passive deterrence to active deterrence” – was working.

“I think Putin has already blinked in a way,” Taylor, who broke into public view when testifying at President Donald Trump’s impeachment hearings, said in an interview. “He was in a downcast look. And now he’s looking for a way out. He has overplayed his hand, and he can, for a time, content himself with entering into negotiations on a series of subjects.

Others are not so sure.

Some Russian experts inside and outside government say that while Putin seeks Russia’s respect as a great power and genuine attention to its security needs – complaints the West has largely ignored – lengthy negotiations over new arms control treaties or reciprocal limits on troop movements and exercises are unlikely to satisfy him. He will want concrete concessions now, from this point of view, before he can withdraw from the border.

Several administration officials say they believe Putin’s interest in diplomacy is purely tactical and temporary. They suspect he hasn’t amassed his full strength yet and may not want to cross paths with China’s President Xi Jinping invading just as the Winter Olympics begin in Beijing. Putin is emerging from a long COVID-related lockdown to join the celebration later this week, and he will use this time to meet Xi, with whom he has formed something of an alliance of convenience.

The Olympics end around February 20 and the hands of the Russian administration say it will be time to assess whether they have had an effect. Perhaps, they say, Putin will test Biden by trying to take more territory in the Russian-speaking east and south. Perhaps he will try to undermine the Zelenskyy government by cutting off power or communications.

But many echoed Biden’s statement two weeks ago at a press conference, when he said, “I guess he’s going to move in. He’s got to do something.”

This story originally appeared on nytimes.com. Read it here.