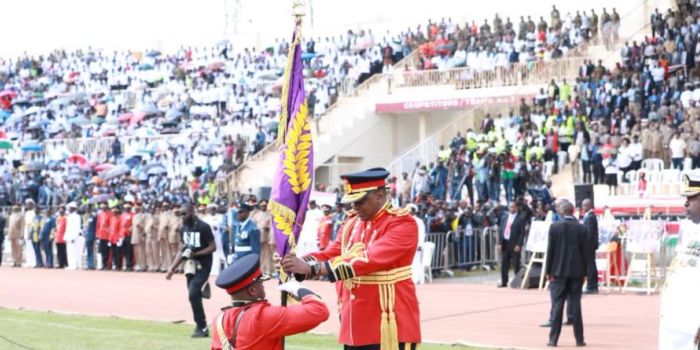 During the celebrations, the Head of State gives the colors (Presidential and Regimental Colors) to the battalions. In addition, the military holds a national ceremony during which the Commander-in-Chief is honored with the Guard of Honor (GOH).

The colors that are a staple in Jamhuri celebrations symbolize the day the country became a republic.

The presentation of the presidential color to the 1st Battalion, the Kenya Rifles, by former President Jomo Kenyatta on December 12, 1964.

The practice dates back to the 1660s, when the ceremony was first performed during the reign of King Charles II. A century later, the parade was decreed to mark the sovereign’s official birthday and it became an annual event following King George III’s accession to the throne in 1760.

Kenya, after becoming a colony of the British, embraced the tradition by association. On the day Kenya gained independence in 1963, the ritual was not abandoned but rather included in the parade of presidential and regimental flags.

The flags symbolize the spirit of the regiment as they bear the battle honors and insignia bestowed on the regiment in commemoration of the sacrifices and deeds accomplished by the troops. Colors are the highest honor of any regiment / unit, so a loss of the color would result in the disbandment of the military unit.

The Presidential and Regimental flags are treated with the utmost respect and are saluted as a sign of respect whenever one approaches them, as they represent the honor bestowed on the unit.

It is for this reason that those present are asked to stand up and that the members of the forces in uniform salute each time the flags pass.

The parade of colors is performed twice by infantry units, air force bases or naval bases. The first time is when the Presidential and Regimental flags are presented to a unit for the first time – a process known as the dedication and presentation of the flags by which they are presented to the battalion.

The colors are kept locked and are only accessible occasionally for ceremonial presentations.

Uhuru Gardens set up for Jamhuri Day on Saturday December 11, 2021.

Courtesy of the Ministry of the Interior