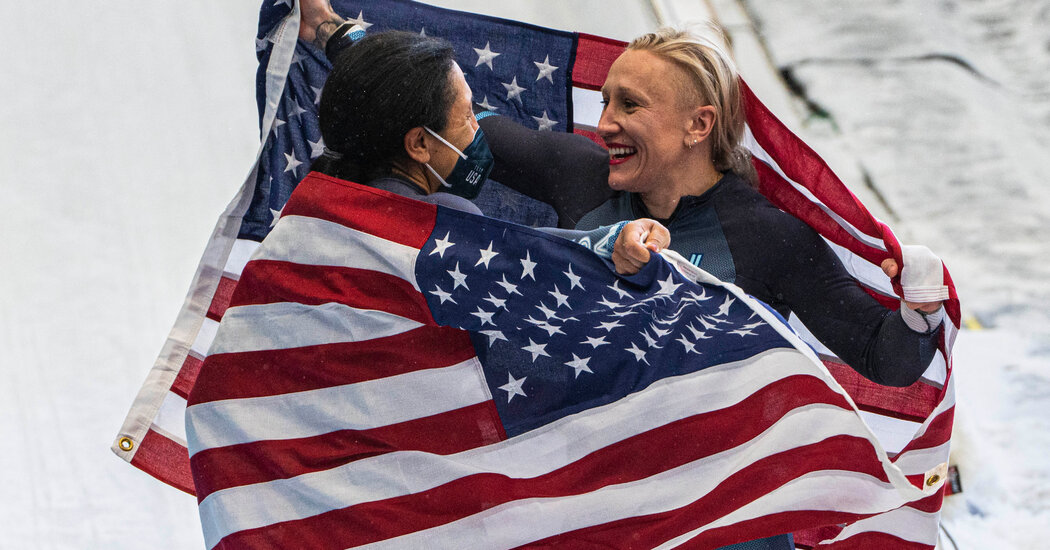 Kaillie Humphries stood in a familiar place on the podium of the women’s monobob competition, a recognizable medal around her neck, quietly singing a different national anthem to that of her previous Olympic triumphs.

The moment was more than the gold medal. She won it representing the United States at the Beijing Games after a controversial split from Bobsleigh Canada, a program she took to new heights by winning three Olympic medals.

“This one feels more emotional than most,” Humphries said. “It kinda strikes a chord knowing that I had to fight so hard for something I wanted and I had the support and support sitting behind me and it worked.”

After winning a bronze medal in 2018, Humphries filed a formal mental and verbal abuse complaint against Bobsleigh Canada coach Todd Hays. She demanded to be released from the program, triggering a protracted standoff.

She became a dual US-Canadian citizen in December, leaving just enough time to qualify for the Games. On Monday, she won the first monobob event of the Olympics, in which a female athlete pushes and pilots her sled down the icy track.

Humphries zigzagged for a four-run total time of 4 minutes 19.27 seconds. Elana Meyers Taylor, who was chosen as the flag bearer for the opening ceremony but tested positive for coronavirus after arriving in Beijing, emerged from quarantine in time to win silver for the United States. Canada’s Christine de Bruin was the bronze medalist.

Humphries, 36, now has three Olympic gold medals following her victories in the two-man bobsleigh event at the 2010 and 2014 Winter Games. No other woman has won more than one gold medal in this sport since the International Olympic Committee introduced women’s bobsleigh at the 2002 Olympics.

But this victory was different, especially when Meyers Taylor saluted Humphries at the end of his final run and the two draped themselves in American flags. Friends and rivals, the two traded victories and places on the World Cup circuit for more than a decade.

Meyers Taylor won bronze pushing Erin Pac’s two-woman sled in 2010. She became a pilot, assuming more control over her sled and her destiny. She won silver with Lauryn Williams in 2014 and with Lauren Gibbs four years later.

On Monday, Meyers Taylor shared a podium with Humphries at the fourth Olympic Games.

Bobsledding is a family business for 37-year-old Meyers Taylor. She traveled to Beijing with her husband, Nic Taylor, a substitute for the men’s team, as well as their 2-year-old son, Nico, and his father, Eddie Meyers.

When the whole family finally tested positive for the coronavirus, Meyers Taylor isolated himself from them. She trained in a cramped hotel room and pumped breast milk for Nico.

“It’s better than gold,” Meyers Taylor said of his money. “It’s definitely the toughest medal I’ve ever won. It was definitely the hardest journey to get here, so it’s by far the most special, and I’m so excited to return this medal to my son.

The IOC has announced the Olympic inclusion of monobob in 2018, but only for women. The men are still the only competitors in the four-man event.

Humphries and Meyers Taylor will have another opportunity to add to their combined eight Olympic medals. The two-woman bobsleigh event begins on Friday, with each woman piloting her own sled.