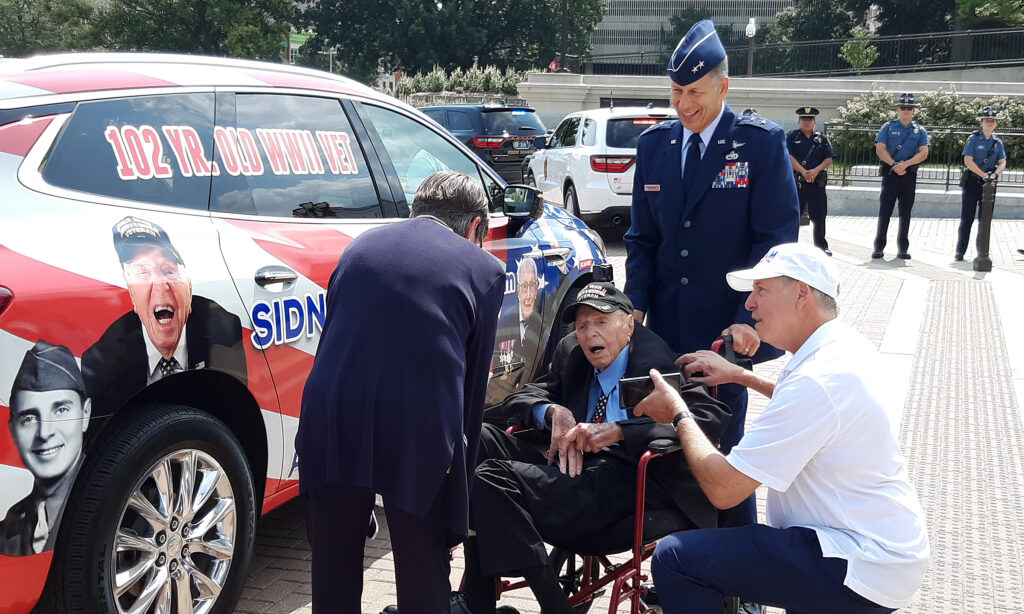 TOPEKA – Sidney Walton regretted missing an opportunity to personally meet some of the last surviving Civil War veterans at the 1939 World’s Fair in New York City.

Walton, 102, is in the final leg of a “No Regrets” tour of 50 states to give people the chance to visit a World War II veteran and raise money for charity. The former US Army corporal began the mission nationwide in 2018. Kansas was his 39th state on the road trip to the United States.

During a visit to the Kansas State Capitol, Governor Laura Kelly presented Walton with a state flag as well as a coin decorated with an image of ruby ​​red slippers worn by Dorothy in the movie “Wizard of the Oz”. In response, Walton gave the governor a cap commemorating his whistling visits to state capitals.

Major General David Weishaar of the Kansas Air National Guard shared his appreciation for Walton’s decision to join the US Army eight months before the Japanese attack on Pearl Harbor in 1941. Walton became a medic in the 34th infantry, 8th Division and was stationed in India during the war. He remained in the army for five years until the end of the war.

Walton, who was born in 1919 and lives in San Diego, said his mission during World War II took him away from his preferred goal: “I joined the military to fight Hitler.

His current quest echoed the outlines of the campaign started by Captain Tom Moore, who was in the British Army during World War II and fought in Burma. Moore turned his 100th birthday into a project to raise contributions for charity, ultimately generating $ 46 million for healthcare workers in England. He passed away in February.

Walton’s son Paul is accompanying Walton on a tour now dedicated to generating support for American nurses engaged in the response to the COVID-19 pandemic.

“Three and a half years ago,” said Paul Walton, “we embarked on this wonderful tour called the ‘No Regrets’ tour. Because all my father’s life I always heard that he regretted one thing. He had regret.

Turning to his father, he asked him, “Do you wish you had met Civil War veterans when you were young?” If you could go back in time, could you meet them? “

“Yes, that’s right,” said Walton, who planned to spend the night in Wichita before heading to Oklahoma City to meet with the governor of Oklahoma on Friday.

In February 2020, Walton was among four surviving WWII veterans who entered the Super Bowl LIV draw, a game won by the Kansas City Chiefs.

Paul Walton said his father was more fragile than when they took the trip to the 50 states, but every day of the tour was a blessing. The COVID-19 pandemic has reduced the possibilities of traveling to state capitals, forcing them to travel in a vehicle richly decorated with signs indicating their task.

“We will accomplish this mission,” he said. “Delaware, known as the first state, is going to be our last state.”