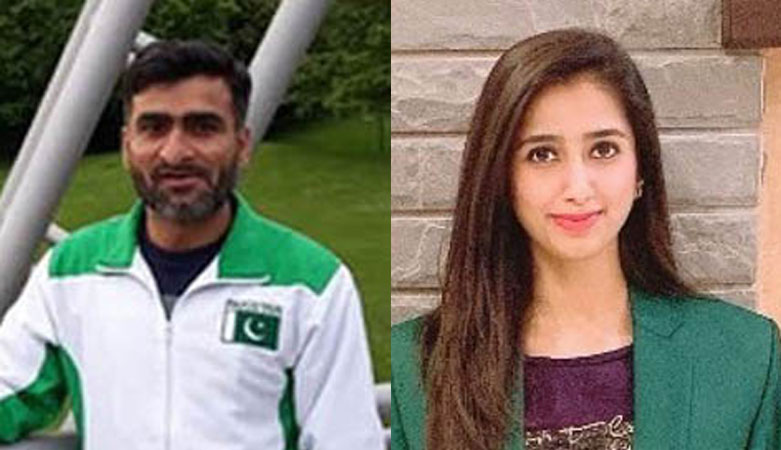 LAHOR: National shooter Muhammad Khalil Akhtar and national badminton star Mahoor Shahzad will be Pakistan’s flag bearers at the opening ceremony of the Tokyo Olympics on July 23. Khalil qualified for the shooting competition at the Tokyo Olympics thanks to his performance at the 2019 Shooting World Cup in Rio de Janeiro, Brazil. Mahoor was invited by the Tripartite Olympic Games Commission. She is the first woman to represent Pakistan in badminton at the Olympics. It will be the first time that there will be two Pakistani flag bearers at the opening ceremony of the Olympic Games. The flag bearer at the Olympic Games is a symbolic leader, who is the first person to parade a country’s delegation during the grand opening ceremony parade. The person proudly displays the country’s flag during the parade. Since 1948, most of Pakistan’s flag bearers at the Olympics have been field hockey players. With Pakistani hockey failing to qualify for the Rio de Janeiro 2016 and Tokyo 2020 Olympics, the POA handed the flag bearer responsibility to judoka Shah Hussain Shah in 2016 while Khalil and Mahoor were selected. for the Tokyo Games. Pakistan’s first flag bearer at the 1948 London Olympics was Ahmed Zahur Khan.

â€œWe think it is a huge honor to be named the flag bearer for the Opening Ceremony. It’s a big time in our career, and it’s also a big time for shooting and badminton, â€said Khalil and Mahoor. â€œIt would be an additional motivation for us. We look forward to this responsibility at the opening ceremony in Tokyo, â€added the duo. The Tokyo Olympics will end on August 8. The Olympics are the biggest sports festival in the world. Largest in number of competitors, viewers, global reach and TV coverage. On March 25, 2020, the Tokyo 2020 Olympic Games were postponed to 2021 due to the novel coronavirus pandemic, the first such delay in the 124-year modern history of the Olympic Games. The postponement marked the first break in the four-year cycle for the Summer Olympics since the 1940 and 1944 Games were canceled due to World War II.

Pakistan Olympic Association (POA) general secretary Muhammad Khalid Mahmood told the Daily Times on Monday that according to the Tokyo 2020 Olympic Games / International Olympic Committee (IOC) instructions, each National Olympic Committee must nominate an athlete accredited female and an accredited male athlete. of his delegation to serve as the flag bearer in the parade for the opening ceremony of the Tokyo Games. â€œPOA Chairman Lt. Gen. (r) Syed Arif Hasan endorsed the names of Khalil and Mahoor as Pakistan’s flag bearers at the opening ceremony,â€ he added. A Pakistani contingent of 22 members (athletes and officials) will participate in the Tokyo Olympics.