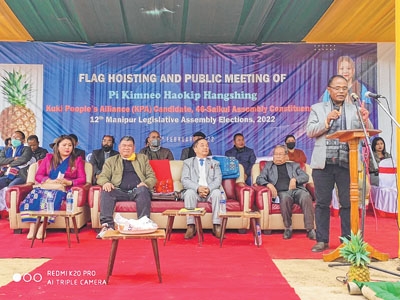 Our Staff Reporter
IMPHAL, Feb 10: The flag hoisting ceremony of Kuki People’s Alliance (KPA) candidate of Saikul Assembly constituency Kimneo Haokip Hangsing was held today along with a meeting public which later took place at Saikul Public Ground.
It can be mentioned that KPA was recently constituted with the aim of providing a platform to air the grievances of the Kuki community. This newly formed political party will field two candidates in two CAs in the upcoming Manipur 12th Legislative Assembly elections. The other candidate besides Kimneu Haokip Hansing is Chinlunthang Zou from Singngat Assembly Constituency.
The flag hoisting ceremony took place at Saikul Bazar electoral office. After the party flag bearing the symbol of a pineapple was unfurled, a public meeting was held at Saikul Public Ground during which Haokip and other party leaders addressed the rally.
Speaking on the occasion, KPA Chairman Tongmang Haokip said the party was formed to ensure that the Kuki communities in the state have a platform to voice their demands, problems and their grievances.
He said this political platform will ensure two-way communication between the Kuki community and the current state government and as such will meet the needs of the Kuki community.
Furthermore, the KPA chairman said that there are currently no plans for the party to form an alliance with rival political parties, but once the elections are over, the party may consider forming an alliance with the party that has the potential to play a major role in the formation of the new government.