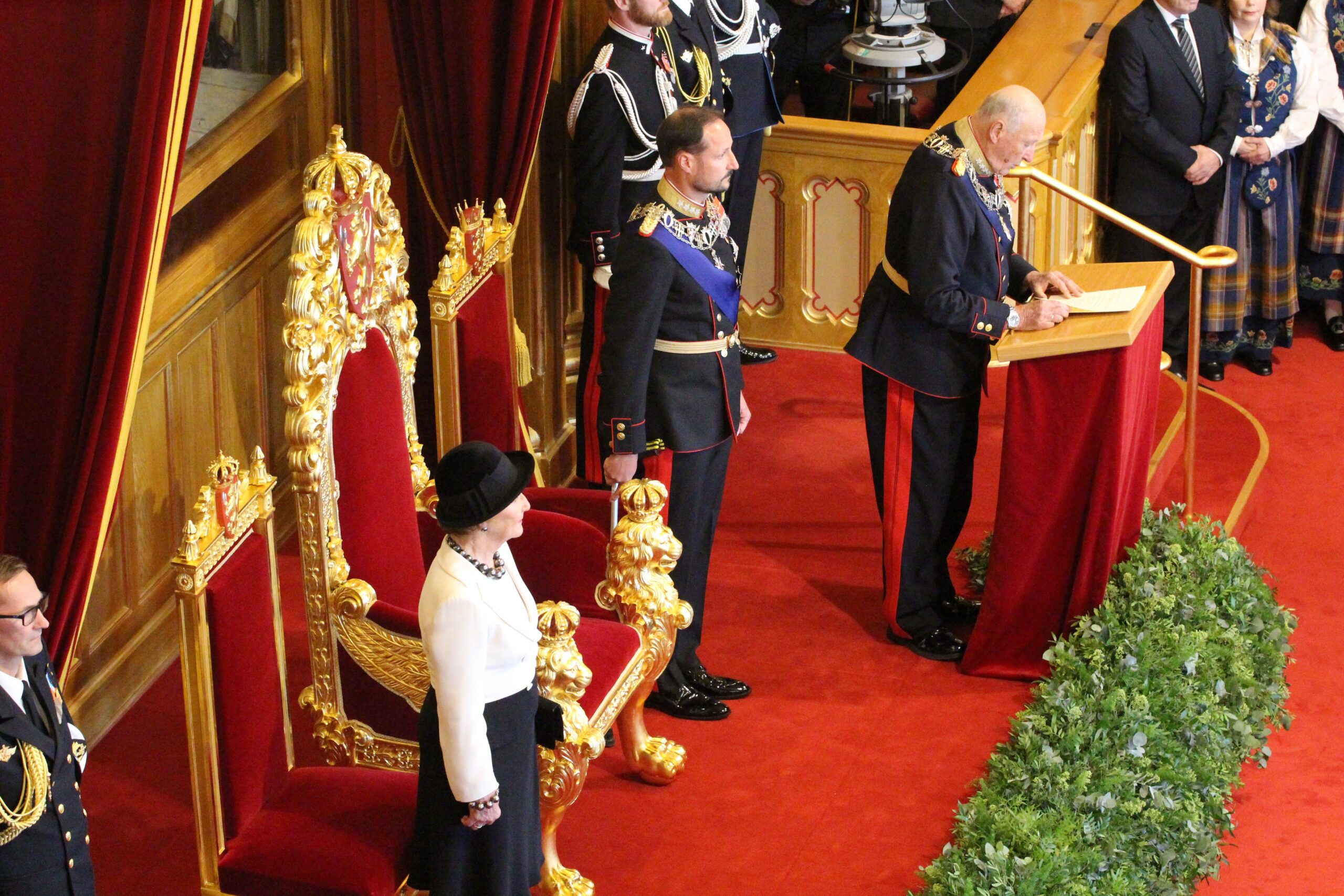 King Harald and Queen Sonja of Norway were joined on Monday by Crown Prince Haakon at the official opening of the Norwegian Parliament, the Storting, in the country’s capital, Oslo. It was the 29th opening of state for King Harald, whom he presided over as King of Norway, and it was the 166th time that the Norwegian parliament has officially opened.

The military forces of the Navy, the Air Force and the land defense, as well as the King’s Guard, took their place in the street of the parade, which connects the Royal Palace and the Parliament well before the opening . The roads were also decorated with Norwegian flags and thousands of spectators.

The ceremony began after Crown Prince Haakon arrived at the Storting, where representatives of parliament received him. After a few minutes, the procession of the king and the queen left the Royal Palace. The motorcade slowly descended Karl Johan Street before reaching the Storting shortly after. All along the street, people could be heard cheering and applauding the King and Queen, and many brought Norwegian flags with them as Their Majesties joyfully greeted the people.

The King and Queen were also greeted by parliamentary representatives before entering the parliament building. There they walked through all the rooms and entered Eidsvold’s Gallery before ending up in the June 7 room. In the Eidsvold Gallery, there are portraits of all members of the Eidsvold Assembly, which drafted the constitution of Norway – the second oldest constitution in the world still in force. This coin is often described as the most beautiful coin in the entire Storting. The June 7 room is named after the date Norway declared itself an independent kingdom from Sweden in 1905. It is also the day King Haakon VII returned to Norway in 1945 after five years in exile. in Britain as a result of the world war. II.

It is common practice for the King and Queen to walk side by side on official occasions. This does not apply during the official opening of Parliament. Here all the emphasis is on the king and his power to open parliament. This is why the king walks alone, after the welcome committee of the parliament, while Queen Sonja walks side by side with her son, the crown prince. After Crown Prince Haakon and Queen Sonja, follow the military adjutants of the royal family and the leaders of the royal court.

The main hall of the Storting changes dramatically when the King opens Parliament. At other times of the year, the room consists of 169 chairs for representatives in a semi-circle around a large podium, a smaller podium, and two debate chairs. This is removed when the King attends the Storting and is replaced by the Norwegian throne, along with two smaller chairs for the Queen and the Crown Prince. In addition, the President and Secretary of the Storting have a separate office in front of the King, so that all chairs are turned towards His Majesty. Storting chairman Tone Trøen arrived at the hemicycle with the secretary and said the meeting was legal. After that, a large delegation with officials who served as representatives of the police and different departments arrived.

The royals then arrived in the main lobby of the Storting. Many parliamentary representatives were not dressed in black dresses. Instead, many representatives used their bunad, their traditional Norwegian festive dress, from the district they come from. The last to arrive in the room after the King, Queen and Crown Prince was the Norwegian government. Upon their arrival, the Royal Norwegian Anthem was sung.

Prime Minister Erna Solberg then went to the King and gave him “the Speech from the Throne”. This is written by the Norwegian government, which contains a brief summary of what the government wants to do in the coming year. After the king reads the speech, it is a common tradition for the youngest member of the Norwegian government to read a brief statement, as well as the situation in the country. The President then concluded the speech with the same words that ended speeches by Presidents for the past 166 years, and all Representatives joined in the words:

“God save the king and the country. “

These words were followed by the first verse of the Norwegian national anthem, “Yes, we love this country”. The King, Queen and Crown Prince then left the room followed by the government. When the King left Parliament, it was announced with royal fanfare, and all members of the Storting are required to sit in the main chamber until Her Majesty is no longer in the building. It is a custom that dates back over 100 years.

The official opening of Parliament marks the start of a process of many important political decisions for Norway. It is common for the Minister of Finance to present the new national budget within a week of the King declaring that the Norwegian Parliament has the mandate to govern the country.

Crown Princess Mette-Marit does not attend the official inauguration, nor does Princess Ingrid Alexandra, who will one day become Queen of Norway. It is a practice that has evolved over the years. King Olav was widowed for many years and only participated with his son in the opening of the Storting. When King Olav died in 1991, King Harald wanted the Queen to attend the ceremony. In the future, when Crown Prince Haakon becomes King of Norway, it is likely that Mette-Marit will also attend the ceremony, as will Princess Ingrid Alexandra.

The opening of Parliament last year was a historic day for the Norwegian people. For the first time in 30 years, the solemn and traditional opening of the Norwegian parliament was then made by a crown prince and not by the king of the nation. In a ceremony cut short, due to the pandemic, Crown Prince Haakon opened the 156th session of the Storting. Queen Sonja was also present at the ceremony. King Harald was subsequently barred from participating due to illness as His Majesty was hospitalized with breathing difficulties. The last time a crown prince opened the Storting was in 1990. Then it was King Harald who opened parliament as crown prince. Her father, King Olav V, was gravely ill at the time and died a few months later.