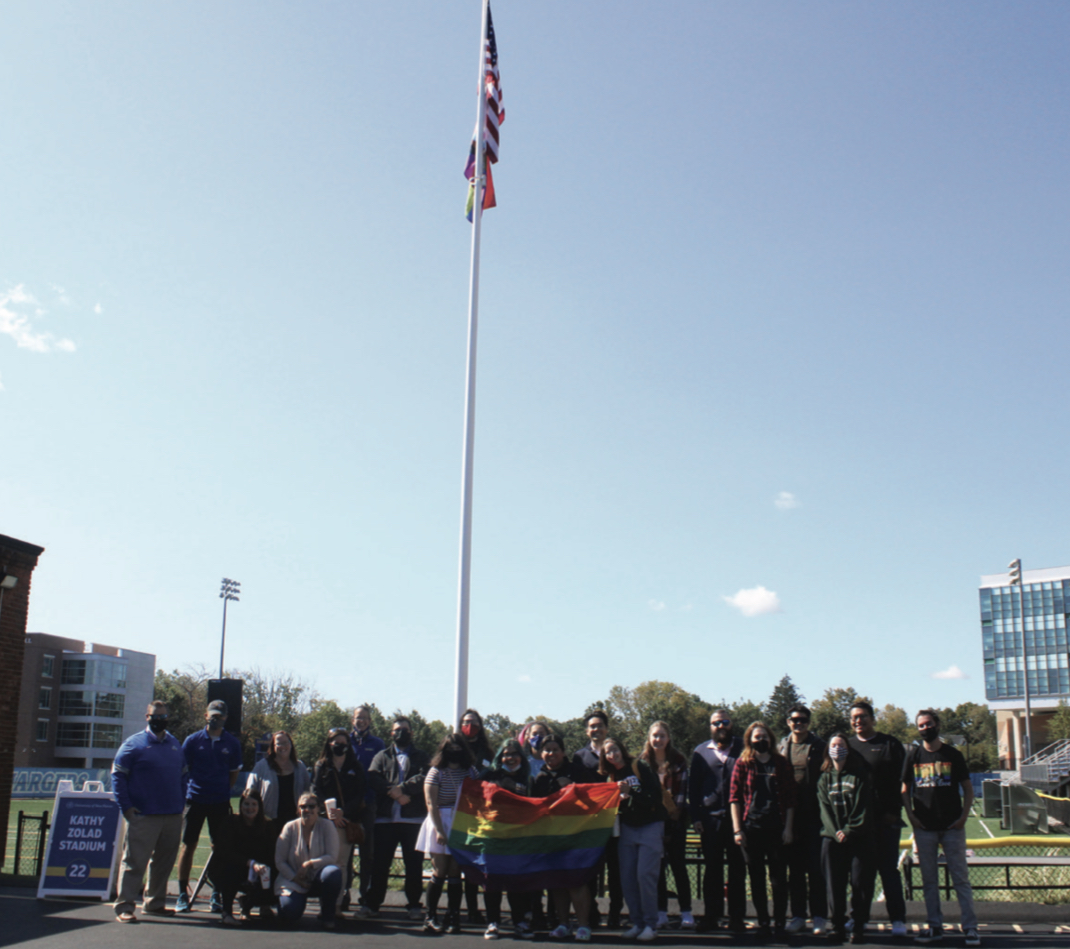 On October 1, the start of LGBT History Month was marked by the annual PRIDE Progressive Pride Flag Raising Ceremony in partnership with the Myatt Center for Diversity and Inclusion at the Kayo Field Flagpole .

While June is Pride Month, October is dedicated to the history of the LGBTQ + community through its struggles and victories. Recognized nationally in 1995, the month aims to celebrate notable community events such as Stonewall and The First March on Washington. National Coming Out Day is October 11, dedicated to recognizing the range of situations and emotions attributed to a queer person publicly claiming their identity.

This year’s ceremony was marked with reverence for the progress being made for the community and a cry to continue fighting for progress not only for members of the college community, but for all LGBTQ + people around the world.

Tran began his speech by recounting a trip to Madrid, Spain, in the summer of 2015. While there one day, he noticed an abundance of pride flags fluttering in the windows, while others were still in the process of being deployed. He said he joked, “Clearly that’s it for me.” In reality, this was just one part of the world celebrating the United States Supreme Court expanding the right to marry to same-sex couples.

He called on the crowd to action in the continued fight for the protection of LGBTQ + people locally and around the world. He also called on the assembly to vote in elections at all levels of government.

Finally, he said: “Today and the rest of the month we celebrate LGBT history, but every day we continue our fight to make history.”

PRIDE President Nicole Sotto highlighted Rodney Wilson, a history teacher who helped establish the month, and said the LGBT community is the only marginalized group not officially included in the history curriculum. in the world other than Scotland.

After citing the steps towards progress on campus, such as the name change form, gender-neutral bathrooms and thanking those who made the change possible, Sotto said, “I hope we will continue to advocate. for change and to make our community even more visible on campus. by organizing educational events and continuing to encourage acceptance among the diverse population of our community.

Patrick McGrady, associate professor of sociology spoke about the progression of LGBTQ + rights at first, quoting Audra Lorde: “My silences did not protect me, your silence will not protect you.

He said how important it is for community members and allies to speak out because silence is dangerous.

“We should never be content with progress,” he said, “and advances in LGBTQ + rights are” chaotic, continuous and ever-changing. “

McGrady said that despite many victories, the community still faces obstacles locally and globally.

“Tolerance is just not enough,” he said, and, citing activist Bayard Rustin, promoted “angelic troublemakers” who must “not be afraid to speak out, do pressure for more programs and funding that give more space to LGBTQ + students, a more intersectional policy that understands the nuances of identities within our community, pushes professors or supervisors or administrators or e-board to take this movement to the serious.

Shick shared the upcoming pride-related events hosted by the Myatt Center. For National Coming Out Day on October 11, the center hosted a “Coming Out Stories” event at 7 p.m., followed by a “Chalk the Quad” event where the college community left affirmative messages to the community bordering the Bixler-Gerber Quad.

To close the program, Zanaiya Léon, deputy director of the Myatt Center for Diversity and Inclusion, said that this was the first year that the center had three employees and that there was a position dedicated to LGBTQ + resources, detained by Shick. She also invited everyone to visit the Myatt Center.

PRIDE has weekly meetings at 9 p.m. in Westside 111 with a Zoom option available. The full flag-raising ceremony is available on PRIDE’s Instagram.