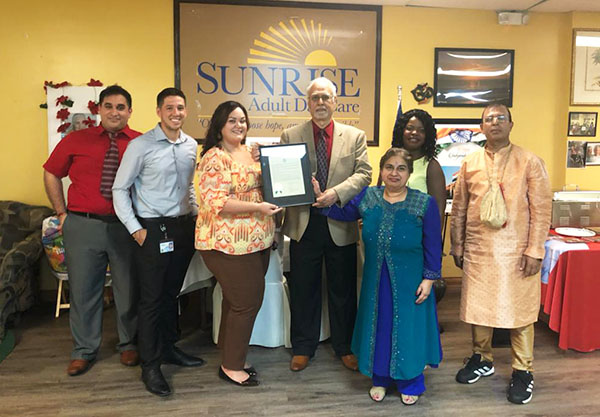 Sandy Mistry greeted guests, including those from the mayor’s office, such as Austin Lee, the Town of Greenacres Public Information Officer, and Greenacres Councilwoman Susy Díaz.

Díaz thanked Surinder Zutshi for his efforts and presented him with a proclamation from Mayor Joel Flores, who proclaimed August 15 India’s Independence Day, and also commended Zutshi for his work in bringing together Indian communities and Americans. Zutshi thanked the mayor’s office and said he wanted America and India to continue working together as the world’s two greatest democracies.

“India and America are similar in that they are both robust democracies, they both have their rule of law rooted in their respective constitutions, which guarantee freedoms for all regardless of race, sex, creed or origin,” he said. “Kashmir Solidarity USA salutes the President of the United States of America, Joe Biden, for his tremendous leadership in protecting America and the world during the successful military operation that took place on July 31, 2022, during which al-Qaeda leader Ayman al-Zawahiri, the world’s most wanted terrorist, was killed.

He then thanked Indian Prime Minister Narendra Modi for the great job he has also done in the fight against terrorism.

Surinder Zutshi has worked for a long time in promoting Indo-American relations as the Commissioner of Human Rights in Hudson County, New Jersey.

Surinder Zutshi along with Lee, Díaz and Mistry, hoisted the Indian flag on a 24ft pole to display the tricolor to celebrate the occasion. The flag raising was followed by an Indian lunch prepared and served by Palace Cuisine of India.