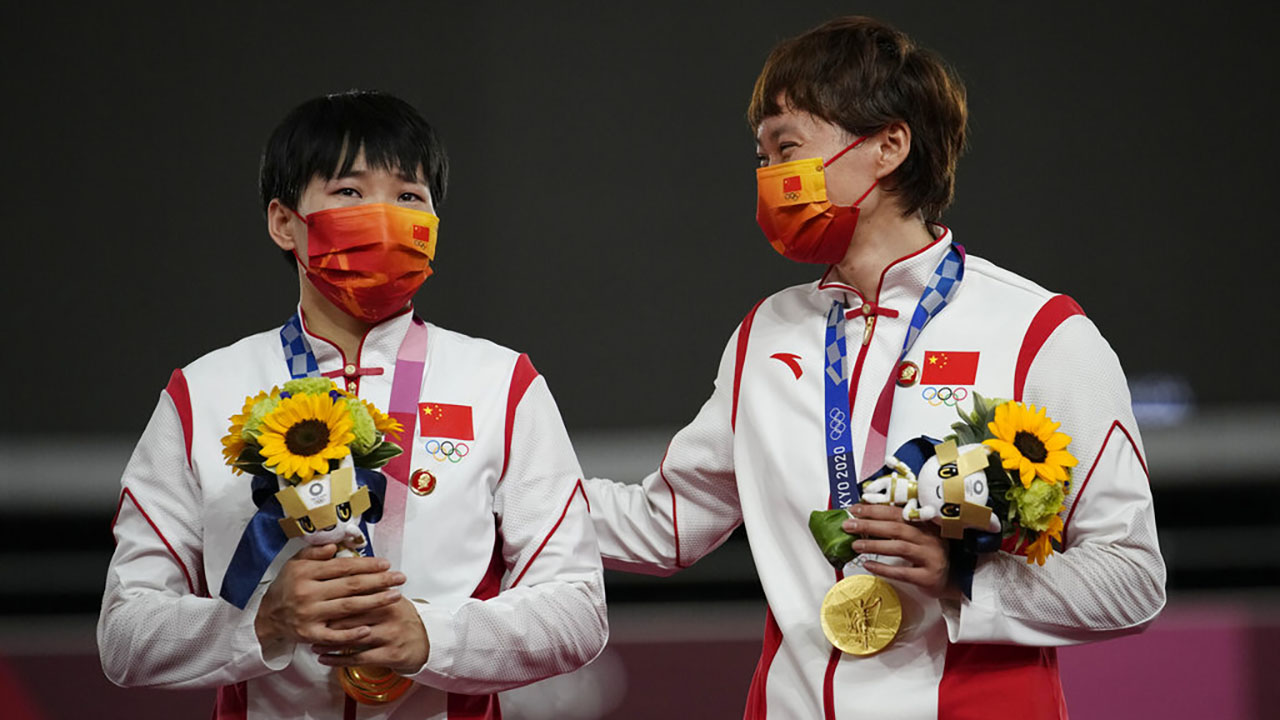 TOKYO (AP) – The image of Communist China’s founding leader Mao Zedong made an unexpected appearance at the Tokyo Olympics, and the International Olympic Committee said on Tuesday it was “looking into the matter.”

The gesture – Mao badges worn by two Chinese gold medalists during their medal ceremony – risks being considered a violation of rule 50 of the Olympic Charter, which prohibits political statements on the podium at the Games in Tokyo – and at the upcoming 2022 Winter Games in Beijing.

After winning the women’s track cycling sprint on Monday, Bao Shanju and Zhong Tianshi wore Mao badges. The Communist leader who proclaimed the founding of the People’s Republic of China in 1949 remains an iconic figure in China 45 years after his death in 1976.

The incident came a day after American shot put silver medalist Raven Saunders crossed her wrists with her raised arms on the podium. She stood next to the gold medalist from China.

It was not clear on Tuesday whether Mao’s lapel pins were a response to the shot put medal ceremony.

“We contacted the Chinese Olympic Committee, asked them for a report on the situation,” IOC spokesman Mark Adams said at the daily press conference at the Tokyo Games.

Badges showing Mao’s profile were worn by hundreds of millions of people in the 1960s to show their loyalty to the chairman of the Communist Party and the ultra-radical cultural revolution he launched in 1966. The current leader Chinese party Xi Jinping has invoked Mao’s image as he tries to promote his own status as a historic Chinese leader.

During a July 1 event, Xi appeared in Tiananmen Square in central Beijing in a gray Mao jacket identical to the one worn by the former ruler in a nearby portrait overlooking the square. Other party leaders at the same event dressed in blue costumes.

The IOC made public its President Thomas Bach’s regular calls with Xi ahead of the opening of the Beijing Olympics in February, which human rights activists have tried to label as “genocide games” because of the government’s treatment of the Uyghur Muslim minority in northwest China.

At the Tokyo Olympics, where activist athletes were expected to attract attention, Saunders pushed the boundaries of Rule 50 by crossing his wrists to make the shape of an X when asked to explain it.

Saunders turned to photographers at the Olympic Stadium to make the gesture seconds after she stood in front of the Chinese flag during the national anthem played for Gong Lijiao. The US Olympic body is taking no action against Saunders, who said Monday night “to be respectful of his competitors and has not violated our rules for the event.”

The IOC has asked team officials for more details, Adams said on Tuesday, adding that he had taken note of public opinion in the matter. There has been broad support for Saunders, who is black and gay.

Saunders said on the Olympic track his goal was to “show the younger ones that no matter how many boxes they try to put you in, you can be you and you can accept it.”

The IOC has long claimed that it is politically neutral and must maintain this position to allow more than 200 national teams to arrive and participate in the Olympic Games on an equal footing. Still, the rule banning demonstrations by all athletes at Olympic venues was relaxed slightly in the weeks leading up to the opening ceremony in Tokyo, where athletes had to test its limits.

Gestures and statements are now allowed inside the playing field at the start line or before a match, but not during competition or during medal ceremonies. Several women’s football teams, for example, knelt down on the pitch before the first day of Olympic action kicked off on July 21.

Mao’s lapel pins, however, were an unexpected turn in the Rule 50 debate. Wearing of these badges declined after 1970 due to complaints that produced them and depleted scarce supplies of metal required by the industry. Chinese. Originals from the time of the Cultural Revolution are sought after by collectors, both in China and in the West.

Images of Mao became popular again in the 1990s to express complaints that ordinary Chinese had not taken enough advantage of the heartbreaking economic changes that caused inflation and layoffs at state-owned enterprises.