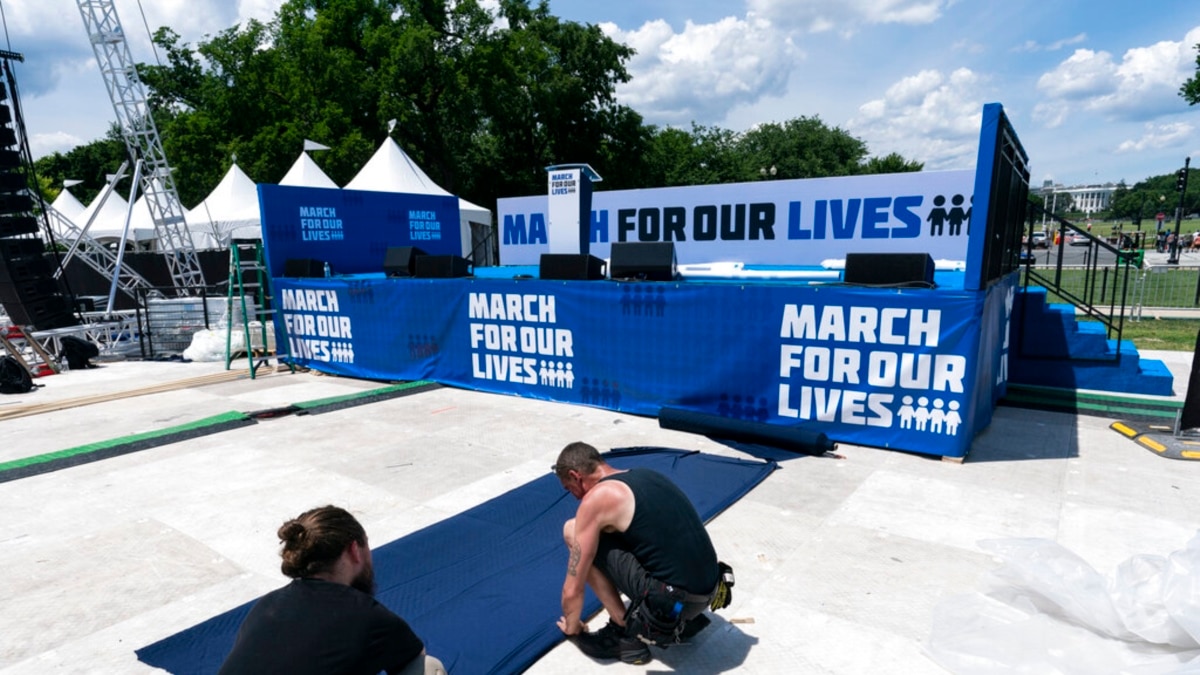 ‘March for Our Lives’ returns with new gun control

Angered by the relentless toll of gun violence, tens of thousands are expected at rallies this weekend in the nation’s capital and across the United States to demand that Congress pass meaningful changes to gun laws .

The second “March for Our Lives” rally will take place Saturday in front of the Washington Monument, a successor to the 2018 march organized by student protesters after the mass shooting at a high school in Parkland, Florida.

Now, with the recent shootings from Uvalde, Texas, to Buffalo, New York, bringing gun control back into the national conversation, organizers of this weekend’s events say the time has come to renew their effort to a national overhaul.

“Right now, we’re angry,” said Mariah Cooley, a March for Our Lives board member and senior at Howard University in Washington. “It will be a demonstration to show that we as Americans are not going to stop anytime soon until Congress does its job. And if not, we will reject them.”

About 50,000 attendees are expected to travel to the District of Columbia, with rain in the forecast. That’s far fewer than the original march, which filled downtown Washington with more than 200,000 people. This time, organizers are focusing on holding smaller marches in around 300 locations.

“We want to make sure this work happens across the country,” said Daud Mumin, co-chair of the walk’s board of directors and a recent graduate of Westminster College in Salt Lake City. “This job isn’t just about DC, it’s not just about senators.”

The protest comes at a time of renewed political activity on guns and a crucial time for possible action in Congress.

Survivors of mass shootings and other incidents of gun violence lobbied lawmakers and testified on Capitol Hill this week. Among them was 11-year-old Miah Cerrillo, who survived the shooting at Robb Elementary School in Uvalde, Texas. She told lawmakers how she covered herself in the blood of a dead classmate to avoid being shot.

On Tuesday, actor Matthew McConaughey showed up at the White House briefing room to push for gun legislation and made some very personal remarks about the violence in his hometown of Uvalde.

The House passed bills that would raise the age limit for buying semi-automatic weapons and establish federal “red flag” laws. But such initiatives have traditionally stalled or been heavily watered down in the Senate. Democratic and Republican senators had hoped to reach an agreement this week on a framework to address the issue and discussed Friday, but they had not announced an agreement by early evening.

Mumin called the Senate “a place where substantive action goes to die,” and said the new march was meant to send a message to lawmakers that public opinion on gun control was shifting beneath their feet. “If they’re not on our side, there will be consequences – electing them and making their lives hell when they’re in power,” he said.

The “March for Our Lives” movement was born out of the massacre when 14 students and three staff members were shot dead on February 14, 2018, at Marjory Stoneman Douglas High School near Fort Lauderdale, Florida, by a former student. The surviving students organized bus trips to the state capitol to lobby in person, and they successfully lobbied the Republican-dominated state government to thwart the influence of the National Rifle Association and adopts substantial measures targeting gun violence.

Then-Governor Rick Scott, a Republican, signed legislation banning bump stocks, raised gun purchase age to 21, imposed three-day waiting period for purchases and authorized police to seek court orders to seize firearms from people deemed to be threats to themselves and others. .

Parkland students then took aim at gun laws in other states and nationally, launching “March for Our Lives” and holding the big rally in Washington on March 24, 2018.

The group did not match Florida’s results nationally, but has persisted in advocating for gun restrictions since then, as well as participating in voter registration drives.

One of the group’s most prominent activists, co-founder David Hogg, said in a tweet on Friday that he thought “this time is different,” pointing to his Fox News op-ed.

He wrote that his group is not “anti-gun” and supports the Second Amendment but wants action with bipartisan support. “Let’s start there and find a middle ground to take action, because the next shooter is already preparing his attack,” he said.