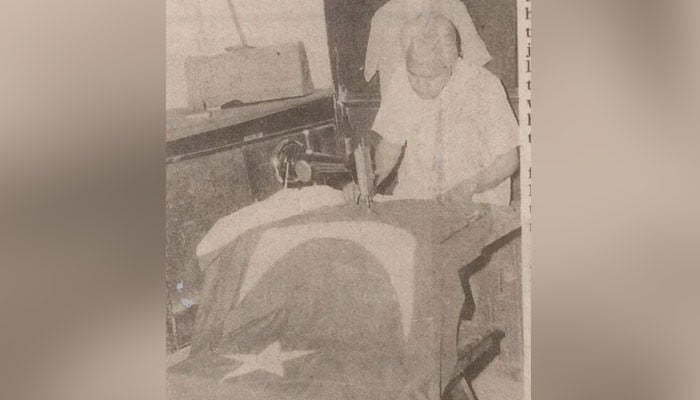 The national flag of Pakistan is truly an interpretation of the aspiration and ambition of every Pakistani. It is not only a sign of glory, but also a feeling of the splendor of freedom for any fellow patriot.

At the time of independence, it was the green crescent flag that became the emblem of the belief and determination of our freedom.

The green flag is a sign of our pride and identity across the world as its swinging in the sky fills us with enthusiasm and fervor. But many of us don’t even know the name of the first flag maker, though the flag is an essential part of every Pakistani’s identity.

History may not forget us if we do not remember the name of the hidden national hero of Pakistan – Master Afzal Hussain.

The first flag of Pakistan was sewn by him, but it is hardly known to anyone we know. He lived in darkness.

The national flag of Pakistan was designed by Ameer-ud-din Qudwai, while the first flag was sewn by Master Afzal Hussain and his younger brother Altaf Hussain in June 1947, two months before independence.

The country’s hidden hero, 67, rests in peace in Karachi.

His family still leads a hard and obscure life.

The national hero who lived a difficult life

Master Afzal Hussain lived a helpless and difficult life as he was diagnosed with bone cancer at the end of his life and died on July 15, 1987.

Master Afzal Hussain was an active and long-time worker in the Pakistan movement and had a tailor’s shop in Delhi. Many famous politicians of the time and Pakistani movement leaders visited his shop to get sherwanis sewn.

But after partition, Afzal Hussain sacrificed everything and moved to Karachi, where Pakistan’s hidden hero went into solitary confinement and never told anyone about his prodigious work sewing the first flag of the homeland.

Recognition of the glorious work of Afzal Hussain

Master Afzal Hussain lived a very poor life. He did not have his own house and lived in rented accommodation in Karachi. The famous scholar Hakim Mohammad Saeed unveiled the heroism and identity of Master Afzal to the nation.

There was a controversy between the families of Master Afzal Hussain and his younger brother Altaf Hussain soon after Ziaul Haq announced to give Afzal the pride of performance.

Altaf’s family claimed that it was Altaf Hussain who sewed Pakistan’s first flag and not Afzal.

However, Afzal’s family says the two brothers sewed the flag together.

“The nation’s dilemma that we have forgotten our heroes”

Master Afzal Hussain’s family expressed deep concern that Afzal is not recognized as a national hero and requested the government to recognize his glorious tailoring work as the first national flag maker at the official level.

Afzal Hussain’s son-in-law Mohammad Mehtab said: “It is the nation’s dilemma that we have forgotten our heroes, however, I urge the government to take serious action to ensure that his name is remembered in the history of Pakistan.

Master Afzal’s daughter has also expressed her disapproval that her father’s work is not recognized nationally.

“My father sewed the first flag of Pakistan but the nation did not remember his magnificent work. Therefore, I demand that the government make serious efforts to keep his name alive,” she said. declared.