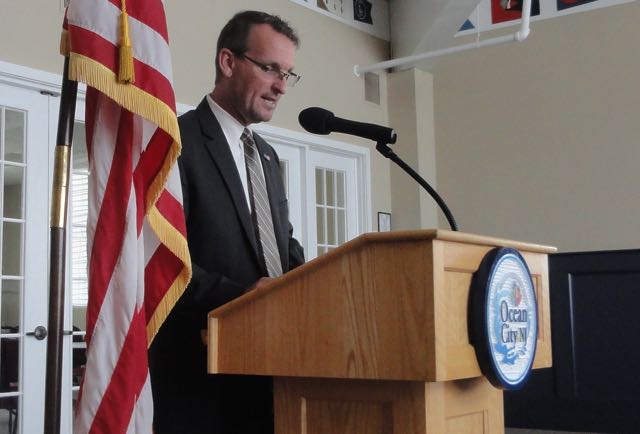 It was great to see so many people attending our last flag raising ceremony on the promenade of the season last Saturday morning and our annual 9/11 ceremony that evening.

Prior to the flag raising, we unveiled a commemorative plaque dedicating the new flag pole outside Music Pier to decorated local veterans Joe Caserta, Bill Cruice and JR Robinson.

I would like to thank local veteran Jack Hagan for all of his assistance in setting up the flag raising and commemorative plaque program.

I would also like to thank the United States Coast Guard for the helicopter flight which brought the ceremony and the season to a dramatic end.

Ocean City held its annual ceremony on the 20th anniversary of September 11th, but it was actually the 21st time we got together. Mayor Bud Knight invited the community to a prayer service at the Tabernacle on the night of the attacks.

I want to thank Billio Olaschinez and Fire Chief Jim Smith for their powerful remarks at the event and Morgan Murphy and Natalie Ragazzo for their beautiful singing vocals.

I am proud to see that our citizens appreciate and appreciate our nation, our veterans and our first responders.

With the end of Labor Day, our off-season schedule of road, drainage and flood mitigation projects will begin. One of the first jobs will be in the area between 26th Street and 34th Street, from West Avenue to the beach.

This project is funded in part by a grant from the State Department of Transportation and work is expected to begin in two weeks. The work will include the removal of siphon (bubbler) evacuation systems along 29th Street and 31st Street.

South Jersey Gas contractors will pave city streets where service line upgrades were made in the spring.

Our operations and engineering team and I met with the residents of Waterway Road yesterday, and we believe we have a solid plan to alleviate the flooding through a combination of street elevation and a new waterway pipe. ‘evacuation.

This is an example of the small projects that can be achieved as we continue to design and build large neighborhood drainage projects.

The team also connected a gravity-fed waste pipe to Third Street Bay and completed a check valve repair to address issues in that area.

Mark your calendars for Saturday October 9 if you would like to take advantage of the free paper shredding services from 8 a.m. to 3 p.m. at the Shelter Road Recycling Center.

Congratulations to the Goudie family on the 20th anniversary of the Walk to End ALS in Ocean City. The annual event takes place tomorrow morning on the boardwalk, and each year it raises funds for an important cause.

The Fastrax team will be in town this weekend and perform three parachute jumps. They will open the Walk to End ALS with a landing at Carey Stadium around 9:40 a.m. on Saturday (September 18).

On Saturday at 8 p.m., the team will perform their parachuting fireworks show with a formation of lights and pyrotechnics show with a landing on the beach at Seventh Street.

At 1 p.m. Sunday, September 19, Police Chief Jay Prettyman is expected to jump strapped to a team member as they open the annual Boardwalk Airshow with the display of the American flag.

Hope you have the chance to watch these great events with your friends and family. They are always spectacular.