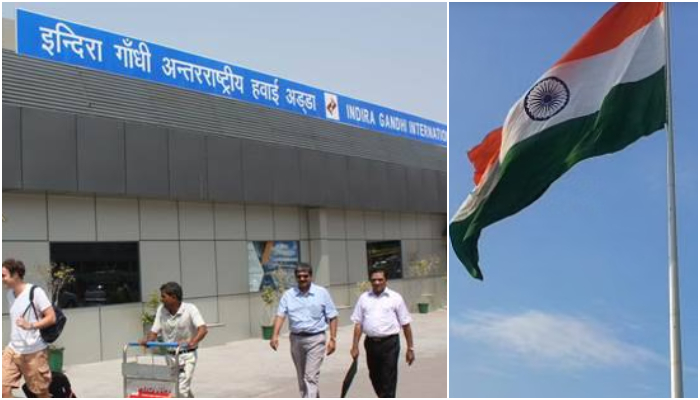 Delhi police on Friday arrested a person named Mohammed Tariq Aziz for disrespecting the Indian national flag at Delhi’s Indira Gandhi International Airport. Aziz, a resident of Assam, had spread the tricolor on the ground of the airport and offered Namaz by standing on it.

Police arrested him after he was handed over by personnel from the Central Industrial Security Force (CISF) which handles security at airports nationwide. He was later released on bail by the Delhi Police on the same day.

According to reports, the incident dates back to May 8 when the accused traveled from Dubai on IndiGo flight 6E24 and was then due to travel to Dimapur, Nagaland on IndiGo flight 6E 5398. At around 5 p.m., he displayed the Indian national flag on the floor between boarding gates 1 and 3 and stood on it to offer the Islamic namaz prayer. “His activities were deemed suspicious and undesirable. He had disrespected the national flag,” police said in the FIR.

The accused was first spotted by CISF staff members who saw Aziz spreading the Indian tricolor on the ground. The staff informed the relevant authorities who took prompt action to arrest the accused. His custody was later handed over to the Delhi Police. The Delhi police interrogated the accused and asked him for an explanation of his act but he could not give a satisfactory answer.

The Police then seized his passport, a photocopy of his boarding pass, and the tricolor flag which he used as a carpet to offer Namaz at the airport. He was arrested and a case was later filed by the Delhi Police under the Prevention of Insults to National Honor Act 1971.

The Prevention of Insults to National Honor Act 1971 is a law which prohibits the desecration or insult of the national symbols of the country, including the national flag, national emblem, national anthem, constitution and India map including disregard for Indian constitution.

The reports further mention that after the arrest, the accused was released on bail on the same day as this is a bailable offence, after giving notice under the article 41 of the CrPC. Notice has been given for an appearance before a police officer and in case the order is not complied with, the police can arrest the person.